Making people suffer together seems to create a unique bond. One that only these people would understand. Even though it's been quite some time since ORD-ing, I'm happy that my batch of ZPC specs can commit to meeting up once in six months. Last December (yes, I'm still far from being done with 2007), it was my turn to organise the meet-up and I decided on Sofra Turkish Cafe and Restaurant. 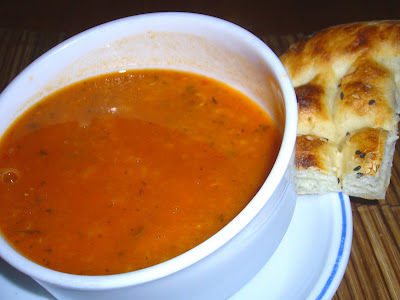 Feeling hungry from the wait, I started dinner with the Red Lentil Soup ($3.30). Warm, slightly spiced and with bits of lentils, it was delicious. Reminded me of a Mulligatawny soup served in Kranji Cookhouse. The bread that came with it was great too, with or without the soup. 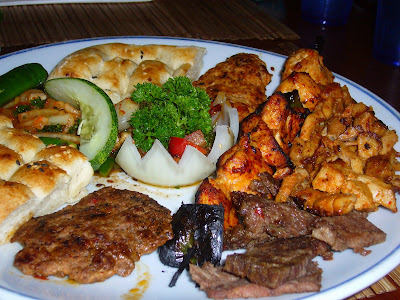 For mains, I chose the Chef Plate ($14.90) which consists of Doner Kebap, Izgara Kofte and a skewer of Shish Kebap (according to the menu). Not being a food expert of any sorts, I couldn't name what was on my plate. But I'm quite certain despite the dish's name, no chefs were harmed in the making of the dish.

I enjoyed the chicken and beef which were marinated in spices and grilled. The meat was tender and the heady mix of spices inviting. I didn't quite take to the salsa/salad which had a rather 'raw' taste though.

To go with the meats, there were two pieces of Turkish bread. It was the same bread that accompanied the soup. Thick, substantial and chewy, I love it! Thank you for being my carbo that night. It was my pleasure. 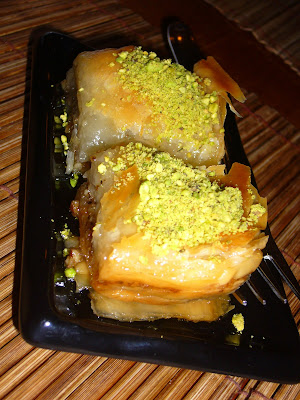 Dessert came in the form of Bakiava ($3.80 for 2 pieces). This is really for those with a sweet tooth. The pastry was drenched in some kind of syrup that totally drown the ground pistachios. Too sweet for my liking but I think the Turkish really like their desserts really sweet. 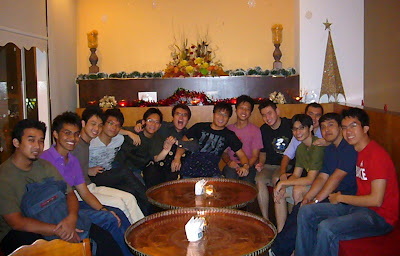 In the end, it was a sweet ending meeting up with friends whom I used to see on an almost daily basis but are now taking different paths. Till the next one guys! Tony, counting on you man.

Chew On This: Sign up to be a Sofra member for $12 and be entitled to 12% discount on the spot as well as for subsequent visits over the next 5 years.
Posted by The Hungry Cow at 9:40 pm

I wonder if this is owned by the same chef.. who had a cafe in Central Mall years ago.. and his wife works in the tv station...??

alex: And delicious too!

crunchasarus rex: Hmm...sounds familiar but I can't confirm this is the place though.