If roast turkey is still in your head, you are clearly disillusional. For the rest of us, it's back to normal life. Bak Kwa and steamboats are another story altogether as CNY looms.

Chicken rice- Singaporeans just can't do without it. Just ask any Singaporean and he/she will rattle off his/her personal favourite chicken rice haunt.

Seeing that chicken rice is rather unhealthy, I usually stick to the better known ones. I would'nt want to gobble down the calories and fats of substandard chicken rice. Fortunately, my (unexplainable) craving for bai zhan ji (roughly translated into white chopped chicken) got the better of me and I tried out this stall in Kaki Bukit. 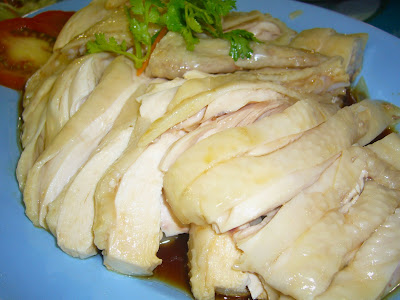 The chicken (1/2 bird at $9) here was fantastic! Tender. Juicy. Smooth. And tasty. The chicken meat here actually has taste. I could only describe it as, for a lack of a better word, chickeny! Some places would soak their chickens into iced water rendering the chickens tender but often flavourless. I don't know if they use the iced water treatment here but the taste was retained. 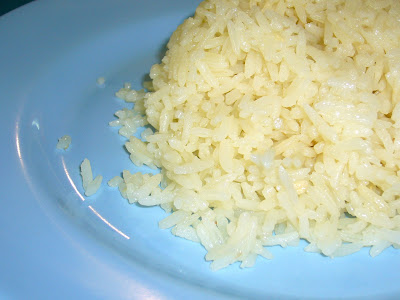 The chicken rice (50 cents) was also nicely done with each soft grain coated with fragrance and flavour. It also doesn't leave one feeling oily. But we all know the truth is sometimes not what we feel yea. 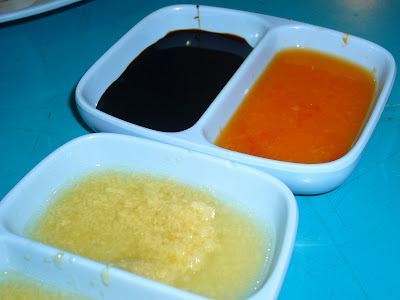 The chilli here was a bit acidic for my liking but the minced ginger played its supporting role with an Academy-Award-wining performance. A combination of these two plus dark soy sauce on the chicken rice is lethal. 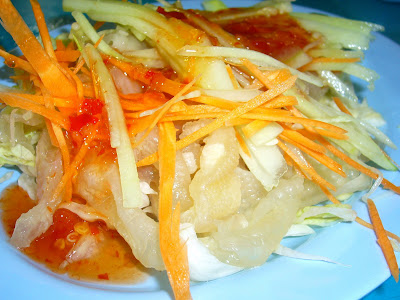 Those with feet fetish may want to check out the chicken feet (small portion at $2) here. Chewy with a bit of crunch, it was served drizzled with a Thai chilli sauce. Alas. I'm not a big fan of Thai chilli sauce. But that's just me.

With good chicken, good rice and good price, this is currently my favourite chicken rice place! 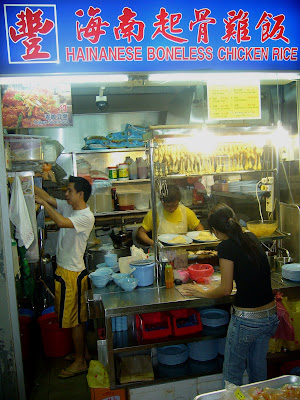 Feng Hainanese Boneless Chicken Rice
#01-58
Blk 511
Kaki Bukit Market Food Centre
Tel: 9457 5514 (Jeff) Yes, he does reserve chickens for you so call before coming down especially around 8pm when most of the chickens would have been sold out.

Chew On This: Jeff revealed that chicken fat goes into the chicken rice here as without it, "it just doesn't have that nice fragrance." Well, if you are like thehungrycow and can't stop at one bowl of rice (unless sick), I suggest having one bowl of chicken rice and ordering subsequent bowls of plain rice from the many cze char stalls around. Some damage control I guess. :p
Posted by The Hungry Cow at 1:17 am

I never used to like the rice.. but the "ang moh" prefers chicken rice to plain ones. :) we donch have the same kinda chicken here.. i just buy the roasted ones we get in the supermarket. And cook chicken rice.. for them.. and me of course.. ;)

Wow, the chicken really looks lovely and so tender. I don't usually go for bai zan ji but this looks tempting. Followed you here from the baker's blog. ;)

crunch rex: Chicken rice has more flavour I guess while plain rice is err... plain. When I was in the US, I did my own take of chicken rice too. Local food is difficult not to miss. I feel your pain.

singairishgirl: Hey there, thanks for visiting this humble cow's blog! I hope you'll be tempted enough to try this but since taste is (very) subjective... well, hope you'll like it too!