I heard that one should carbo-load before a marathon. So even for the half marathon of 21.1km, I decided to load up on them carbo.

Besides waking up at 3am on marathon day morning to chomp down two baked Russets and two bananas, I went to my favourite carbo-loading place in Race Course Road on Friday. 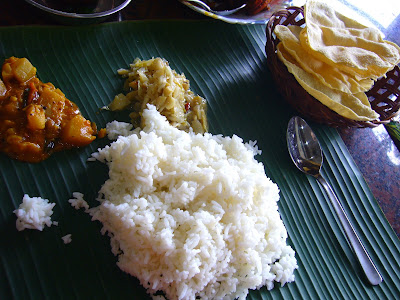 Lunch at Banana Leaf Apolo was mainly rice (carbo-loading mah), and came with two vegetable sides plus papadum. All these were free-flow and was just $3. This is pure carbo-loading at its best- huge quantity, cheap and delicious. The two vegetable sides are changed according to what is available and what was scooped out of the twin tin containers on this visit was cabbage and some kind of gourd. The papadum did not disappoint too, being crisp and having small bits of cumin.

But rice, two veggies and papadum were feeling a little lonely so we decided to also order other dishes. 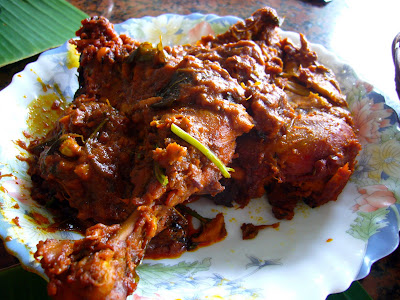 The Chicken Masala ($4 per thigh) was tender and I especially loved the spicy spice girls paste. The only thing was that it was tender to the extent that some of its flesh probably fell off its bone and not onto the plate when it was scooped up. Alas. 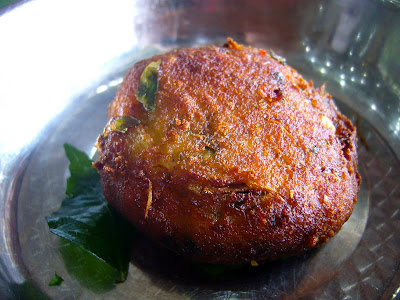 This bergedil-looking Fried Fish Cutlet ($1.75) is a good thing to order. Slightly fluffy and with a sharp taste that hits the palate in a pleasant way, it perked up the taste buds. 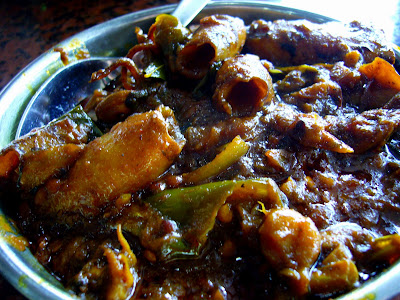 Another dish we ate was the Black Squid ($7). The squids were a little squishy and could be fresher but otherwise it was a dish that provided a bit of sweetness to all that spice around. Blackened by the squids' own ink, the thickish gravy was delicious.

I like the varied and liberal use of spices in the South Indian cooking here and every dish brings with it a different depth of the spice spectrum.

If not for a certain Miss NIE Chan who was sick on that day, Curry Fish Head would have made its appearance on the table. But like samonella in chocolate cake, one can't quite predict illness. I'm happy that her FYP poster thingy is finally over! Congrats and recoverquicklysowecangopiggingout!

Oh and by the way, the carbo-loading was all worth it. Energy well-spent. 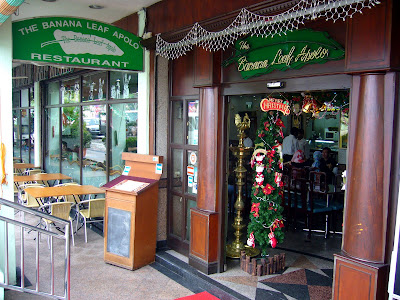 Chew On This: Despite fierce competition from its neighbours, The Banana Leaf Apolo Restaurant still manages to retain its interesting clientel mix of locals of different races, Japanese, Australian, Taiwanese, African etc tourists. Unlike one of its main competitors who has decided to go a bit upscale with zen furnishing and a polished look, I like the old marble table tops, spice-in-the-air smell and that more down-to-earth comfort.
Posted by The Hungry Cow at 5:55 pm