A Good Dose of Meaty Vibe

Or so goes an old Christmas song. I recently had a meal at Vibe that made me sing. And I'm about to sing its praises.

Located in Negara on Claymore which is just behind Pacific Plaza and Shaw House, it is in town yet far from any of that shopping madness that throbs in Orchard. Established as a business hotel for business travellers, it exudes class, comfort and peace. You won't find kids screaming, running around and dipping their fingers into the chocolate fountain. It's a good vibe already. 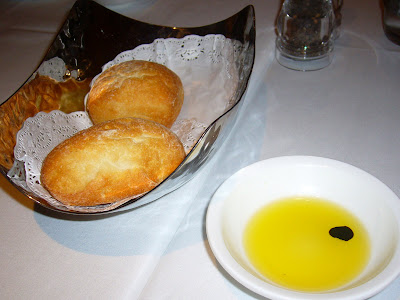 The buffet dinner ($42++) starts with warm bread rolls and a dish of a very fragrant olive oil with a drop of balsamic vinegar. After which we helped ourselves to the starters and appetisers. 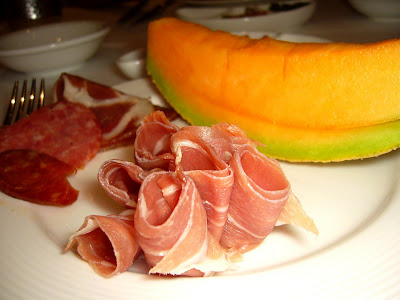 What a sight it was to behold an entire leg of Parma ham. Probably the best of the starters distractions, the rolls of Parma Ham and wedges of rock melon tested temptation and destroyed diets. I love the contrast of the salty Parma Ham and the sweet juicy rock melons. This alone would be already make the price of this buffet worthwhile. Salami and chorizo deserve mention too. 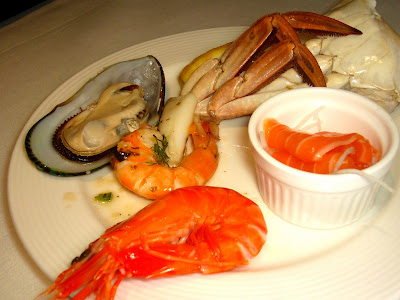 Seafood on ice were also available for seafood fans. While the prawn was plump and sweet, the crab's flesh was a little mushy and insipid. But we're not here for seafood no? 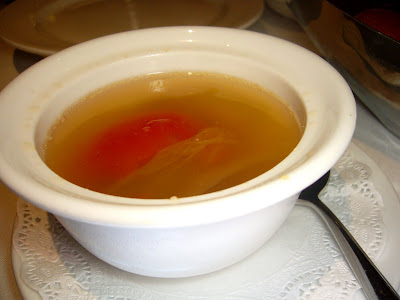 Two soups were available that evening, one Western and one Chinese. We tried one of each. The Western soup was supposed to be Cream of Mushroom (as announced by one wait staff) but what appeared seemed more like a Cream of Potato soup of sorts. It was bland and forgettable. The Chinese soup turned out to be Salted Vegetables & Duck instead of Corn & Pork Ribs (once again the same wait staff). But this was one good Salted Vegetables & Duck soup! Robust and with the salted vegetables balancing out the gamey duck. 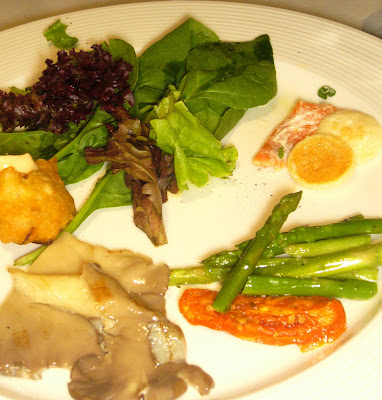 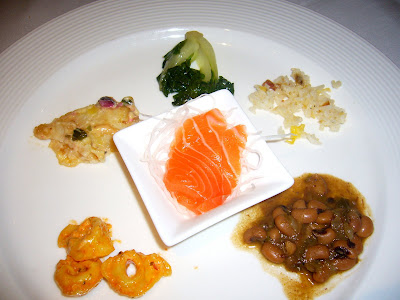 Warm food such as cheese tortellini, seafood ragout, stir-fried vegetables, fried rice and Feijoada, the Brazilian bean and pig stew also vied for attention which I gave a bit of. More distractions... 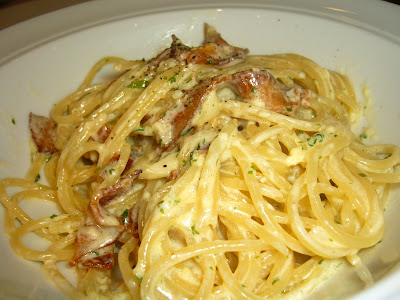 For carbo, there was a choice of pasta to be done in three different ways. The aglio olio and tomato sauce ones were not worth the stomach space. Go for the carbonara instead. Al dente spaghetti was cooked in a cream sauce with bits of bacon. Yummy.

Despite knowing that these were all simply there to distract me from the main star of the dinner, I went back for seconds and thirds of some of the better distractions, Parma Ham included. To beat temptation, eat it. 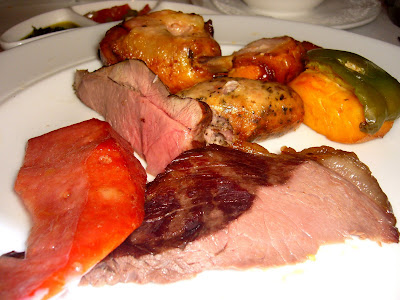 Finally the chef made his rounds with skewers after skewers of grilled goodies. I realised that taking photos of all that the churrasco had to offer was very challenging indeed. Either I had to take individual pictures as they arrived on the plate or I could stockpile the entire offerings before taking a group photo. But both ways, it was a torture to hold on to the camera instead of the fork. So the picture above is not representative of all the grilled items served that night. There was a total of about 13 or 14 items and included the expected beef rump, beef hump, ham, leg of lamb, sausage, chicken, fish, bacon-wrapped beef and pork ribs among others. In general, they were salted enough to bring out the taste of the meats without being close to salt-me-to-death level. 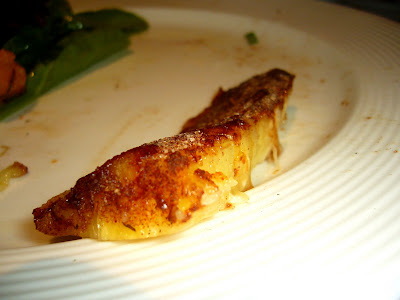 The popular grilled pineapple was welcomed at the table. But one thing that made me uneasy about the one here was that it had a floral, almost lavender aftertaste. Personally, I found it weird.

Then I was held spellbound when the chef presented the beef ribs. 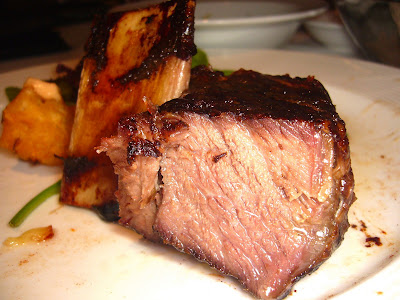 While ribs gave me an impression of a skinny bone with skimpy bits of meat on it, the beef rib painted a very different picture. A very thick slab of meat was attached to a big flat bone. Sufficiently tender and more importantly, full of flavour, it was excellent! The slightly charred and crisped up outer side of the meat added a nice touch. 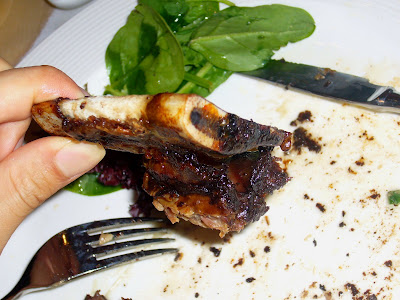 After chewing away the meat, I picked the bone up with my fingers and gnawed at the marmite-black sticky bits. Ok ok, I know I'm at a 5-star hotel and I'm supposed to eat in a civilised manner. But look at the freaking thing! Could you blame me? I shall never forget the beef ribs I had here. Pork ribs just don't cut it anymore. :p 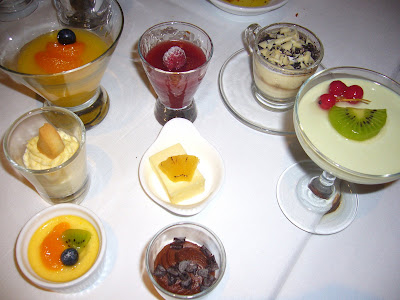 Desserts had a relative sizable range of puddings, cakes and mousse but I think the cup of hot tea at the end of dinner was more comforting.

Vibe does not have an extensive buffet line like those at other 5-star hotels but I find the smaller-quantity-better-quality concept here working well. After all, even with four stomachs, there's a limit as to how much of the buffet spread can enter this hungry cow. This is one buffet that I really like! 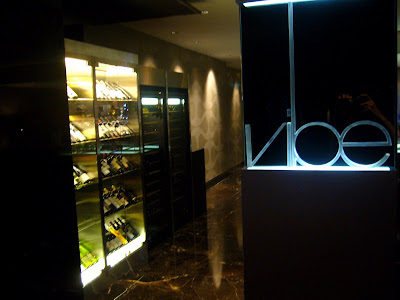 Chew On This: Now till the end of the month, Vibe is having a promotion offering premium meats like Waygu, Black Angus and Kurobuta on the grill! Dinner at $68++ for this premium meat fest. UOB cardholders enjoy a 15% discount, platinum Visa cardholders enjoy 20% off.
Posted by The Hungry Cow at 1:26 pm

boo~~ keke. seems like this holidays u had been going after good food. lolx. anyway, an early Merry Christmas + Happy New Year to ya~

Wah~ Buffet!
The meat slices and the pasta is very very tempting~

Merry Christmas to you :)

the beef ribs have bought me!

tingz87: Festive seasons are perfect excuses for more eating which normally occurs even without these seasons. Merry Christmas & a Happy New Year!

camemberu:I did lick my fingers!! :p

zhengning: Agree! Nothing like a good buffet. Merry Christmas!!

liquidshadow: My soul has been sold.