No, I'm not even going to touch on the scandal that has plagued yet another charitable organisation. Fishy as that might be.

I've heard about the Swedes and their meatballs, vodka and herring but I've yet to try the fish. So after it stared hard at me from behind the chiller door on a recent visit to Ikea, my hand reached for it. 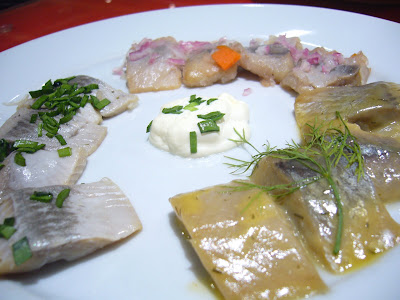 A plate of herring prepared in three different styles ($2.50) was arranged around the small dollop of sour cream in the middle. The one with the chopped spring onions on the left of the plate tasted really salty and fishy. The one in the background with chopped onions was a little sweet and fishy. As for the last one on the right of the plate, it was also a little sweet, had some kind of mustard-like tang and was fishy.

If I had to choose one, my pick will be on the mustard herring. The sweet mustard seemed to be better able to musk the fishiness than spring onions or onions. The sour cream tried in vain.

I'm not sure if that's how herring is supposed to taste like or if it's because the ones here are preserved. I'm not saying that Ikea's herrings were bad but unfortunately, they were too fishy for me. In addition, the texture and bite also needed some getting used to. It could be an acquired taste I reckon. 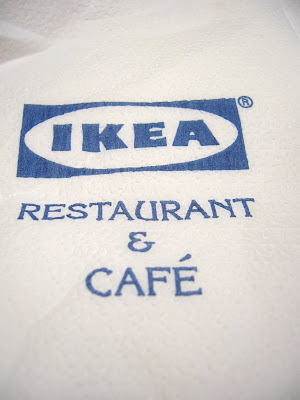 Chew On This: Among all the Ikea outlets in the world, its Singapore outlets raked in the most sales from the F&B side. Well done Singaporeans! Eating is truly a national pastime.
Posted by The Hungry Cow at 8:25 pm

yes, they taste fishy, but they are nice right?

or maybe i have weird a taste bud :-p

keropok man: Too fishy for me I guess. But I've got a friend who smsed me to declare that he's a fan of Ikea's herring after reading this post...so maybe it's me who has a wierd taste bud!! ;)