While 'Night Come Fragrance' sounds like the name of some sleazy nightclub in Geylang, it really is a popular Western food stall with zero sleaze. That being said, I reckon Calvin Klein will not make 'Night Come Fragrance' an eau de toilette in his fragrance line any time soon... unless he foresees the notes of chicken chop and pork cutlet to be desirably cool in a bottle.

But what this post is about is the stall known as Ye Lai Xiang (literally Night Come Fragrance). After hearing many good comments on this place, I was bent on giving it a try when I entered Margret Drive Food Centre recently. 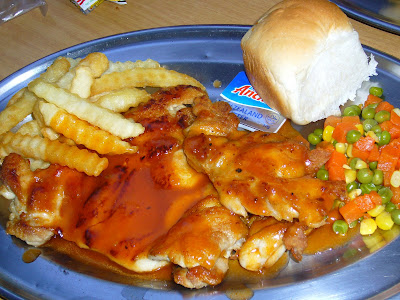 The Chicken Chop (~$5.50) came with crinkle-cut fries, mixed vegetables consisting of peas, maize and carrots and one of those buns commonly found in local Western food. While the sides were nothing worth mentioning, the chicken chop itself was tender and tasty. A sauce which tasted like a mix of ketchup and brown sauce with a dash of Worcestershire sauce, was poured over the chicken chop. Its tangy and slightly sharp taste helped to cut some of the oil. 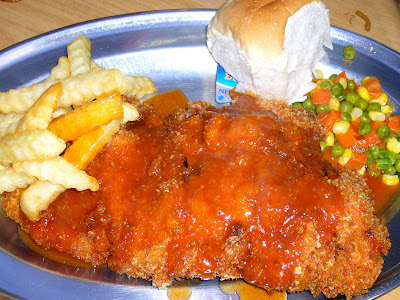 Even better was the Chicken Cutlet (~$5.50). A fairly large slab of chicken was crumb-coated and deep-fried to a golden brown. Juicy and with the nice fragrant coat of crumbs, this was certainly addictive. Once again, the sauce slathered over it provided a nice touch.

While I won't come here just for this, I definitely won't mind ordering its items the next time I drop by for the chicken rice upstairs. 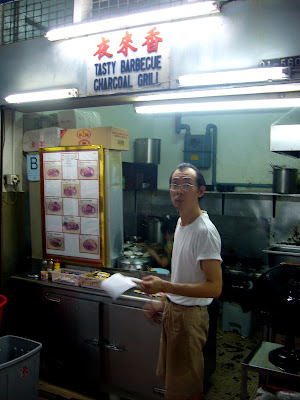 Chew On This: Shutterbugs beware! This uncle here doesn't like people taking photographs of him and his stall. He told me off matter-of-factly in a rather brusque tone after my flash went off. He can be a little eccentric but it's not his attitude that I'm here for anyway.
Posted by The Hungry Cow at 8:42 pm

lol. he scare you steal his recipes. haha.

I think I'm more scared that he'll fry my camera!