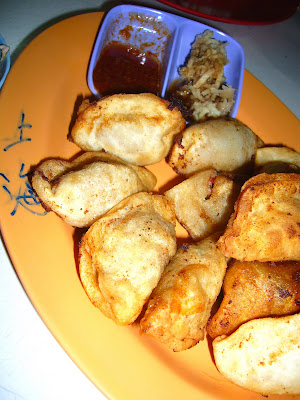 Located on the same floor as Sin Kee, this stall serves up really valued-for-money guo tie ($4) otherwise translated as pot-stickers. Though in a way, they can't really be considered pot-stickers as they were fully fried and I bet they hardly even touched the bottom of the pot, much less stick to it.

I initially thought that it would be one of those guo tie that is first pan-fried and then partially steamed by ladling some stock or water over them before covering with a lid. These would turn out to have a golden-brown, fried bottom with firm tasty fillings encased within a supple, slightly chewy layer of skin. Zilch. Not the ones here though.

The guo tie's here were more like fried wantons with thick skins. I found them a tad too hard from the deep-frying. The filling was sufficiently tasty and the vinegar with ginger helped to perk things up a bit. But nonetheless, I can't refute that at $4 for 10 pieces, it's certainly valued-for-money. Give it a shot if you want something fried and cheap but don't expect guo tie. 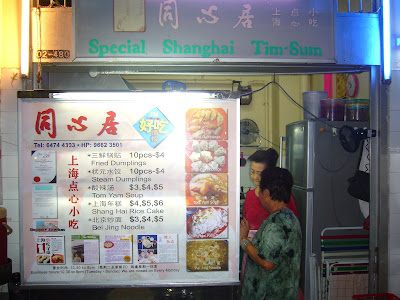 Chew On This: Apparently, this stall has been serving guo tie (at least their version of it) way before the dish made its way into foodcourts here!
Posted by The Hungry Cow at 9:52 am