Sprouts Are Good For You 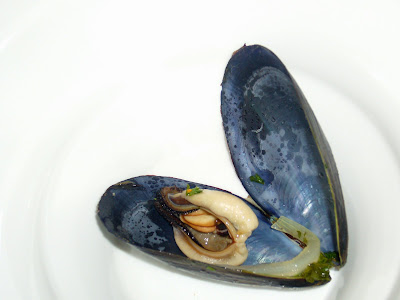 There's something just so sensual and inviting about mussels especially when they are fresh and look like the one above.

Three days after my Dad's birthday is my Sis' birthday. So the birthdays of my Mum, Dad and Sis are all three days apart from the one before in that order. Quite interesting and I was telling my Mum that her timing for my birth was quite 'off'. Born in April, mine is months away to theirs. But life is not about asking one's mother about her planned timings of one's birth.

Life is about celebrations and celebrations about food. So on a cool Friday evening, we headed to Brussels Sprouts. Here, it's all about Belgian beers, mussels and fries. 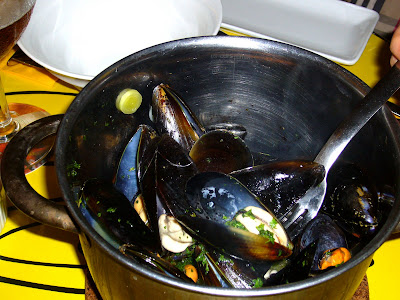 Moules Frites come in a 300g starter portion ($18) and a 700g main portion ($38). There are like a dozen styles to have your mussels cooked but deciding on the Vin Blanc, I had no regrets.

Cooked in a metal pot with onions, celery, parsley, butter and white wine, the sweetness and freshness of the mussels were allowed to shine. The mussels themselves were not large. They were more small-ish but size doesn't matter when they were sweet, plump and juicy. Their slight chewiness proved the good timing of their cooking. The cooking liquid had a slight bitterness which I like but others found it a tad too strong. 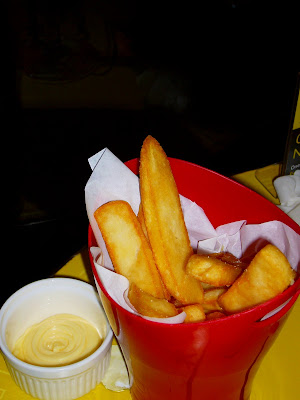 The fries here are thick-cut, golden planks of potato just so lightly salted. Crisp on the outside while fluffy and starchy on the inside, I was instantly hooked. Good eaten on their own but also yummy with mustard, mayo and ketchup. Fries and mayo may be a fat-laden pairing but it works...sinfully. The better news? There's free refills of fries with every order of mussels. 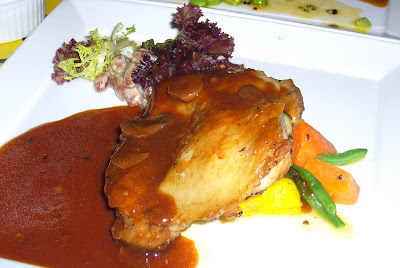 Non-mussel fans (no such thing here) could also try other items in the menu such as the Chicken Forestier ($22). A whole chicken thigh was roasted and served with red wine, mushrooms, shallots and thyme. The chicken was tender and I was surprised that it went really well with the red wine sauce. On the side, there was a small portion of some kind of beans in a bit of cream. The starchy, rich taste of the beans tasted good with the cream. 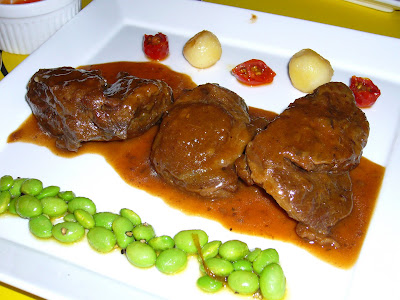 Cheeky people would be happy with the Braised Veal Cheeks Infused in Brune Beer Served with Baby Potatoes ($26). Three generous chunks of veal cheeks sat in a delicious gravy that had been flavoured with beer. The cheeks did not melt-in-the-mouth but were still wonderfully tender. The edamame beans on the side was simply tossed in butter, pepper and salt. It provided a refreshing touch to the robust beer-infused gravy. The pickled tomato was too tart for me but practically did a good job of cleansing my palate, together with a few sips of water. 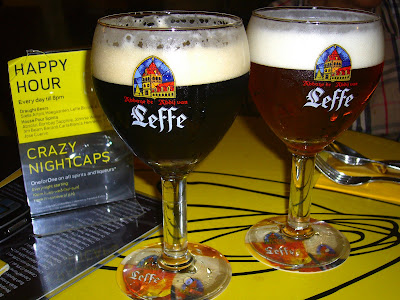 Beer is certainly taken seriously here with a mind boggling stock of 70 plus different types for one to choose from. In fact, ask the wait staff or consult the menu for recommended beer-food pairings. I tried the Leffe Brune and the Leffe Blonde (each $10.50 for 330ml; $7.50 each during Happy Hours) The dark-coloured Brune was robust and malty with a strong metallic zing at the end. The Blonde had a golden hue and was lighter in style, offering more fruit.

And if you're wondering where's the Brussels sprouts... don't bother. There isn't any. Who needs those small, round veggies when they've got great fries, mussels and beer here? 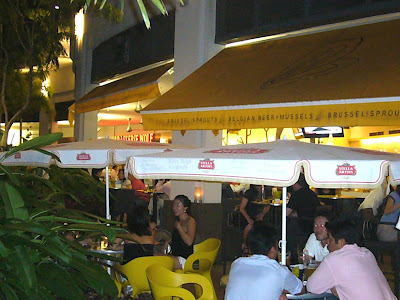 Chew On This: Towards the end of my dinner, I saw Emmanuel Stroobant walk out of the kitchen. And literally, he was a Chef in Black, just like the name of his show on Arts Central. Brussels Sprouts, along with Saint Pierre and San Marco, is one of the eateries under this Muscles from Brussels. Don't play play.
Posted by The Hungry Cow at 12:06 am

If the mussels are looking that good, i would gladly be a convert! (;

Haha! Just like the fresh scallop experience at Tonkichi huh.. (; Okay.. since it's so near, it would be in the list of next place to check out! :D

Thank you for sharing valuable information.