While many children have a sparkle in their eyes whenever they lay their hands on a Happy Meal from MacDonald's, mine sparkled when I had my Happy Mee. It's probably the Happy Meal toy that they're more interested in anyway.

Happy Mee (noodles) refers to this prawn noodles which really made my day. Hey, it doesn't take a $XXXX 3-Michelin-starred haute dinner to make my day ok... Although that could possibly make my year! But I digress.

The prawn noodles here at Beach Road Prawn Mee Eating House (Note, it's in East Coast Road and not Beach Road despite the name.) are really good. 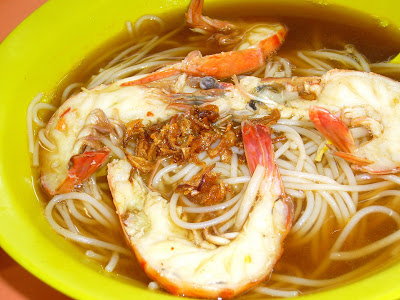 For the Prawn Noodles in Soup ($4), I opted for chor bee hoon (thick vermicelli). The soup was nicely prawny and the hours of boiling with pork bones really showed. But it somehow got 'diluted' by the chor bee hoon I guess. The soup that came with the dry version was much more robust. A good thing that it didn't have that strong rock sugar sweetness that most stalls tend to over do, by a lot. The dish was beautifully enhanced by the shallot and pork oil that was drizzled over it.

The two decently-sized prawns were succulent and thankfully not overcooked. They also did not have the 'super alkaline treatment' which would have transformed them to 'super alkaline prawns' with super crunchiness. Super (artificial) crunchiness is some thing that I don't quite favour. A little may be alright but any more and it's a turn-off. The prawns here are a bit more 'natural' in that sense i guess. 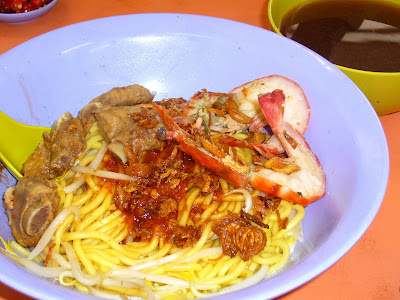 For $1 more, you can have pork ribs added to your prawn mee, but at the sacrifice of a prawn I must say. I found the servings of small, scrawny pork ribs unsatisfying, especially at the cost of $1 and a prawn.

I wish that they had added more kang kong and bean sprouts.

But the dry version of the noodles was delicious. It evoked memories of myself as a primary school boy eating at the tuckshop in the old Saint Andrews Junior. It must have been that same mix of pork oil, fried shallots, ketchup and chilli in the yellow egg noodles. And here I present to you the 6th taste after sweet, salty, sour, bitter, umami.... Nostalgia! It's a powerful taste that is so very personal. Food that evokes memories of yesteryear are indeed powerful and most often flavoursome. Food taste better with memories added to it. Don't you agree?

School starts next Monday, bringing an end to the long holidays. Now what a spoiler. 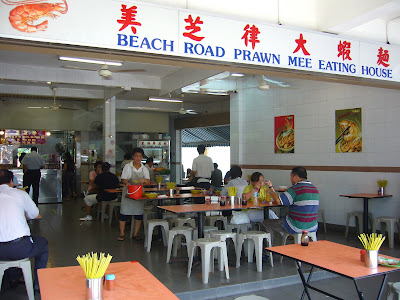 Chew On This: According to this stall, prawn mee originated from Xiamen and was first introduced to Singapore by the Lee family who learnt the secret recipe from the Xiamen immigrants. The stall is currently run by the 3rd generation of Lee's.
Posted by The Hungry Cow at 5:15 pm

I only have a vague impression of the beach road prawn mee, but ur entry suddenly gave me a craving to eat it. haha.. oh man, it's been so long since i've eaten good prawn mee! =p anyway, school's starting, and it's so super sian
-_-" oh well, faster start faster end right? see u in school!

What a coincidence!I just had the same prawn noodle on fri!!! hahaha yeah i loved it really good but i have to agree that i wasn't a fan of the tiny weeny pork ribs which was mostly bones. Have you tried the "chilli noodles" from beach road food centre? (where the army market is) It kinda of fit your description of the saint andrew's prawn noodle ..but don't expect large prawns but u get pork ribs and prawns for $2!

jazon: It's a taste that has been lost together with the really old, before face-lift, SAJS school building.

yiling: Yes, it's food like this that makes us strong to weather the new term. Haha.

bottomless pit: Yea, scrawny pork ribs are not enticing at all. I've heard about that sarawak mee stall that you have brought up but have yet to try it. But I'll sure to give it a try the next time I'm there. Thanks!