A Soon To Be Lost Comfort

I truly believe in comfort food; Food that need not neccessarily be expensive or rare or classy or exquisitely-presented. But rather, comfort food seems to be able to connect with one and provide a nice warmth. There's something just comforting about it.

One such place that serves food I would term as 'comfort food' to me is Hock Leng Seafood. Located near my current home, I discovered it three years ago after shifting into the area and have been faithfully patronising it since then.

Hock Leng Seafood would be the place for many a dinner before I booked into camp during my NS days and after entering NTU, it continued to be a regular dinner place before I returned to hostel on Sunday nights. A simple meal with the family before I left for the weekdays which were spent in camp and now in hostel. Such is the special attachment that developed.

So it is with great pride that I organised a dinner there with a few League members on one Saturday. And I hope they enjoyed its warmth.

For some weird reason, most of the squid dishes that I've tried here over the years all turned out very good. So for this dinner, I ordered the Garlic Sotong (Squid) and the Salted Egg Sotong. 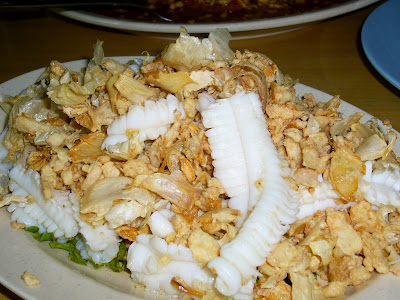 The Garlic Sotong ($8) had succulent pieces of squid which had a very light garlic taste. At this point, vampires reading this blog should flee for their lives deaths lives. For surrounding and on top of the pieces of squid were crunchy flakes of garlic. These were extremely flavourful with the punch of garlic but without the harsh element. Totally addictive. 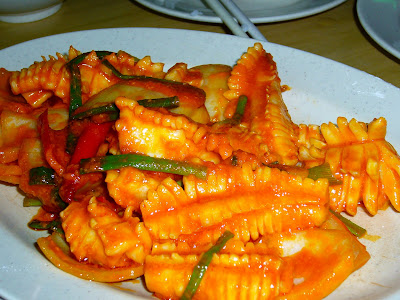 As for the Salted Egg Sotong ($8), it was another winner as the savoury salted duck egg sauce coated each piece of squid. Eaten with rice, the rich and slightly oily salted duck egg made a perfect companion. 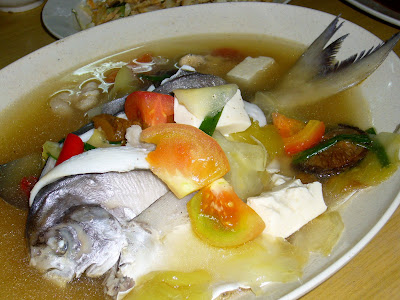 I like the steamed fish served here very much. My favourite choice of Chinese Pomfret was unavailable that night so we settled for the Steamed White Pomfret ($4 per 100g) done Teochew Style. The fish was fresh and while it was less meaty than a Chinese Pomfret would be, it was still good. Steamed with pieces of beancurd, Chinese mushrooms, salted vegetables, tomatos and slivers of red chilli and ginger, the liquid that surrounded the fish was very tasty and good to the last drop. 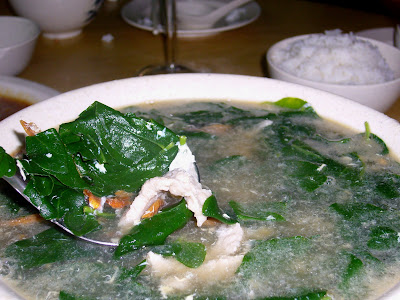 For soup, I picked Gao Geh Tong ($6)- a soup made with with the dark leaves of a thorny vegetable that is believed to be good for the eyes due possibly to its high vitamin A content. The leaves imparted a pleasant slightly bitter aftertaste which the pork, fried garlic and fried ikan bilis (anchovies) complemented well. This resulted in a delicious soup which makes it one dish I never fail to order when I'm here. 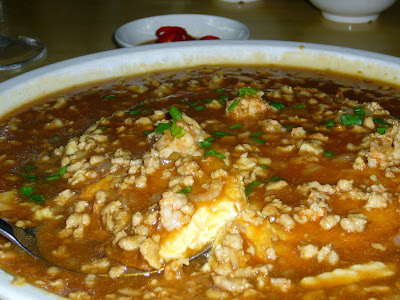 A signature dish here, the Hock Leng Beancurd ($10), is another crowd pleaser. Soft homemade beancurd was deep-fried and smothered with a tasty brown sauce comprising minced pork, prawns, onions and garlic. This ranks top in my list. 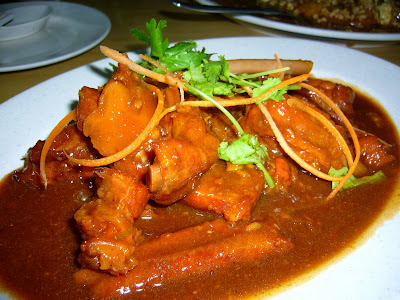 Was everything equally good here? Unfortunately, just as man is not made equal, not every dish was outstanding. The only 'risk' I took that night was ordering the Vietnamese Pork Ribs ($12) as it was the only dish I had not tried before. And I regret my actions as it turned out to be only so average. Maybe that's why the place is called Hock Leng Seafood. Most of their seafood dishes perform better. 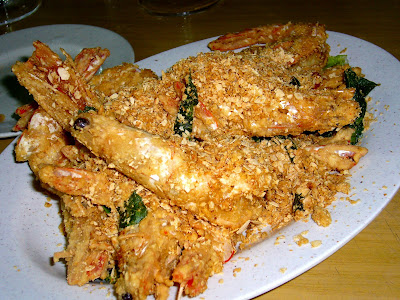 Even after the last morsel of food was gobbled up, we still felt a little peckish and so some one suggested ordering Mai Pian Xia ($15) or otherwise translated as Cereal Prawns. This was also my first time trying this dish here but unlike the Vietnamese Pork Ribs, the prawns was not as disappointing. Fairly large in size, the prawns were coated with cereal and fried till the shells were crispy. The prawn tasted fresh and while the oaty, nutty cereal taste was nice it was not as sinfully good as other versions around. 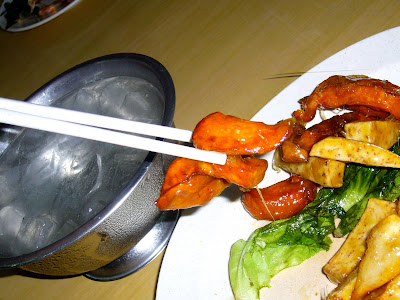 To end the meal, the Lao Ban Niang (Lady Boss) treated us to a portion of Yu Tou Sha. A special dessert that intigued most at the table. When I had my first Yu Tou Sha a few years back, the Lao Ban Niang had to teach me how to eat it. If not for her guidiance, I would have simply washed my hands in the bowl of iced water a la after eating crab!

A bowl of iced water was placed beside the plate containing sticks of yam and sweet potato which had been fried with honey and sugar. Quickly pick a stick of yam or sweet potato and dunk it into the iced water for a few secs. Then take a bite. Lao Ban Niang explained that the iced water quickly cools the honey-sugar coat on each stick of tuber, creating a harder, crisp shell of sweetness. I like the way the coldness of the outer hard coat contrasted with the warm soft fluffy interior. Hard and cold on the outside, soft and hot on the inside. Simply genious.

Along with the items that appeared for dinner that night, I have also decided to mention another two dishes which I like that were part of another dinner there. 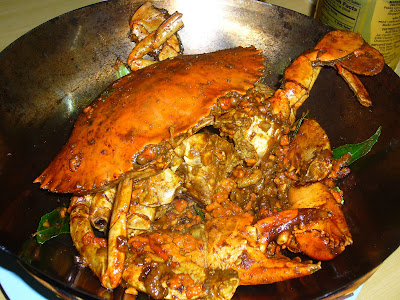 The Gan Xiang Crab ($19.20 for an approximately 600g female crab) was stir-fried with curry leaves, curry powder and crab roe. The crab flesh came off the shell cleanly, without sticking. Tastewise, it was quite a refreshing change from the ususal chilli or pepper crab. There was a bit of heat either from pepper or chilli that hits only a few seconds later. The generous crab roe also made it finger-licking good. Overall, not too bad a crab dish despite me not totally being into these crustaceans. 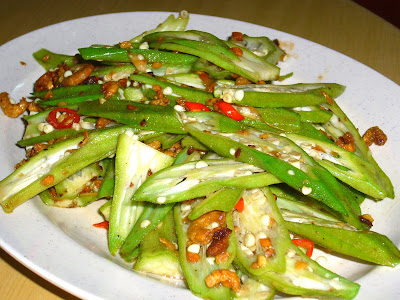 Ladies Fingers Fried with Hae Bee (Dried Shrimps) ($8) is another good thing to order if you eat the vegetable. The slices of Ladies Fingers are not as mushy or slimey as they are known to be. Hae Bee added a depth of flavour while the small bits of chilli provided heat. Yummy.

I'm thankful for the chance to be able to enjoy the food here over the last three years. On that dinner night, another big table was enjoying their food and wine and they have been loyal customers for the past 10 years. I left feeling wistful but grateful for those three years of comfort.

Anyone wanna eat here? Call me along! 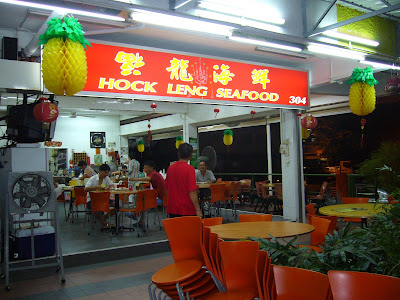 Chew On This: It deeply saddens me to have to say this but Hock Leng Seafood will cease operations on 15 July 2007. Apparently they have recieved an offer to rent the place from them and the chef-owner would benefit from a much needed rest. If you are wondering who's renting the place from them, the answer is Mad Jack Cafe. I'm not terribly excited but I'll be shifting soon anyway.
Posted by The Hungry Cow at 1:43 pm

etc etc... didn't know the term can be loosely translated like this...

Hey Cal, u're right that when it comes to typical comfort foods, those you have listed are the norms. There is a science behind it. (Everything's either fat or sugar laden.) But then again, I suppose foods that give a sense of comfort when eaten can be also considered comfort food. :)

hmm.. how do you get a sense of comfort chomping down those greasy, calorie -laden, spicy chinese food? haha. maybe it's just me :P