I didn't feel old until last week's SBS' Orientation Camp. At a 'ripe old age' of 23 compared to the majority of 19s, it felt really different from say four or five years back when stamina and energy were almost unlimited. Despite interruptions by Spanish lessons, I had fun and Osiris, you guys rock! So it's good bye to Takhent 2007.

Now back to feeling young. Last month's Makankakis Dinner brought me to Dragonfly Inn at Serangoon Gardens. I seldom step into this area as it's rather inacessible without a car or taxi. But for good food, good wines and good company, I pressed on.

The first dish was the Dragonfly Appetizer Platter, which consisted of Cheese Baked Prawns, Deepfried Scallops, Scrambled Eggs with Shark's Fin and Crab Meat and a fourth dish which was more of a surprise as it was not in the menu. 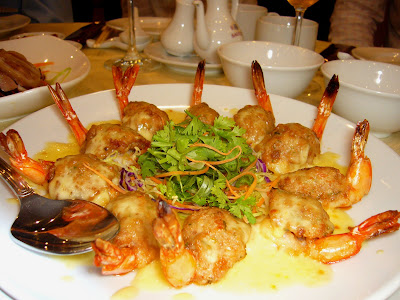 Cheese Baked Prawns sound really yummy and they were. The beautiful presentation certainly whet my appetite (or was it due to the long wait?) and a bite into the prawn revealed that the thing that topped it was minced meat. While flavourful, the minced meat was a tad dry. The cheese provided the melty part but was nothing pungent or strong so those with weak cheese-hearts should be comfortable. 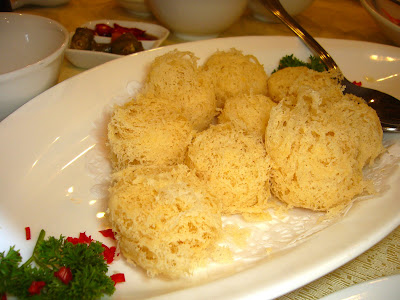 The Deepfried Scallops were kinda small and their crisp coated exterior belied what was inside. One bite and the light crisp coat gave way to the soft scallop which had this curry-like sauce. 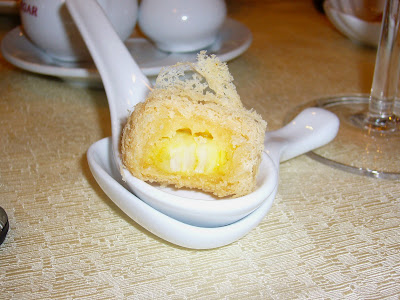 Strangely, the curry-like taste reminded me of those curry-flavoured Twisties. But it was certainly a nice surprise. 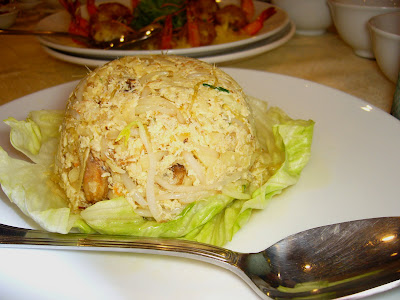 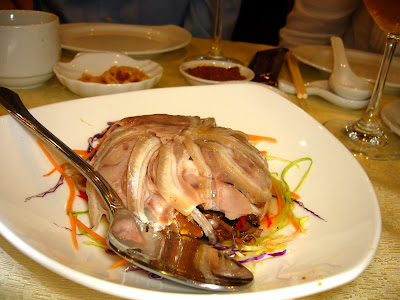 This is the fourth unidentified 'surprise' dish of the Appetiser Plater. I did not taste this one but I heard that it consisted of topshell. 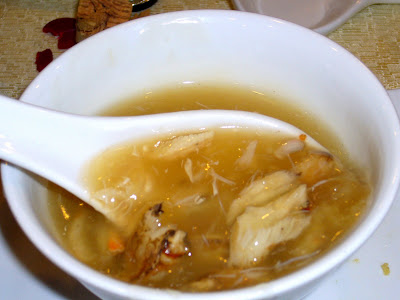 As if recombining once more for an encore, the Shark's Fin with Crab Meat made its appearance at the table. The gravy was a little too thick for my liking but the sweet crab meat made me happy. Oh no. I think I may soon be falling head over hooves for this crustacean. 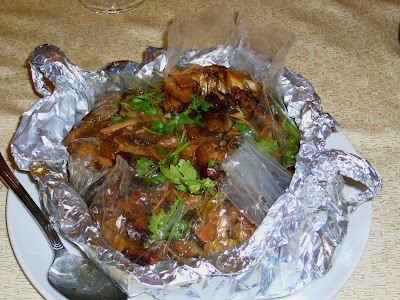 Next up was the Silver Phoenix. No, it was not some new character from the Fantastic Four. Rather, it was chicken steamed with red dates, mushrooms and baby abalone. Sounds good already? 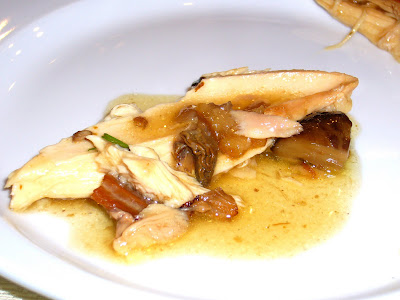 The chicken was sufficiently tender and had absorbed the flavour of the various ingredients. A slightly herbal and savoury stock was very pleasant indeed. 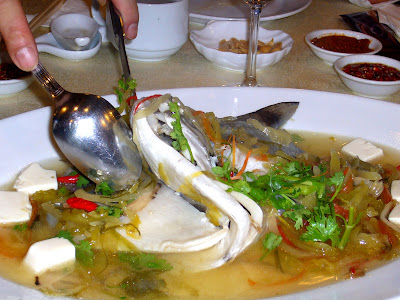 Another steamed dish was the Steamed Teochew-Style Pomfret. The fish was split right down its middle and it amused me a bit as I thought most fish split this way were meant to be fried. But perhaps this way also made the flesh more accessible, removing the need to turn the entire fish over.

The timing of the steaming was perfect as the pomfret's flesh was firm and yet silky soft when my molars did their work. In fact molars would be too harsh an equipment. Gums would do nicely. I also enjoyed the delicious liquid surrounding the fish, that resulted from the steaming. Salted vegetables, tomato wedges, beancurd and slivers of red chilli made it yum yum. 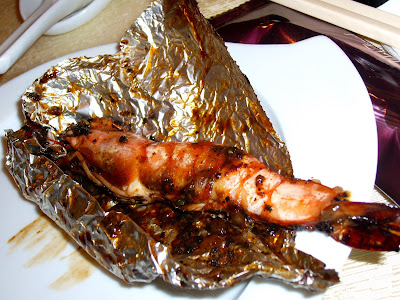 This was one dish that stumped the table. A plate consisting of many aluminum foil-wrapped thingy with satay sticks prodding out. Only after unwrapping the foil did we realised that it was BBQ Giant Prawns. The word 'giant' was probably casually used. To be fair the prawns were large but nothing I would term 'giant'.

A blackish sauce coated the prawns and tasted a bit like black pepper sauce. I didn't take to it. I would have preferred the pure aroma of grilled prawns with a bit of butter and a sprinkle of pepper. 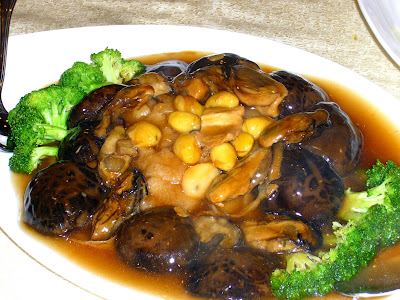 The 5 Treasures with Seasonal Veggies turned out to be gingko nuts, sea cucumber, fish maw, Chinese mushrooms and dried oysters with a few pieces of brocoli that made the veggies look more like a garnish. And I think 'seasonal veggies' here meant anything the restaurant could get its hands on. But of course, like there's a brocoli season in Singapore.

Stingy veggies aside, I must say that the portion of the 5 treasures were generous. The braising gravy was also full of dried seafood flavour. To me, this was certainly a dish of Chinese delicacy standard. 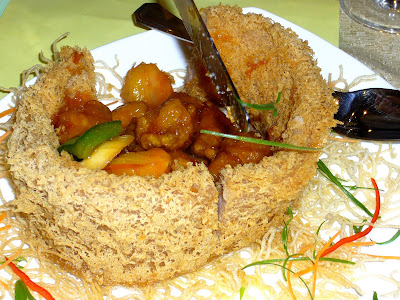 The Sweet and Sour Pork in Yam Basket is a rather common dish but the real deal is how it is being done. The version here at Dragonfly Inn has a slightly fatty piece of pork coated with corn flour, deep-fried and fried with, well, a sweet and sour sauce. The pork did and should have some fat which gave that juicy, satisfying sensation in the mouth. As for the yam basket, I didn't get to try but it sure looked good. Hey, I'm not the fastest eater around. Add in picture-taking and I'm probably one step behind the rest. But that's not an issue to me. :) 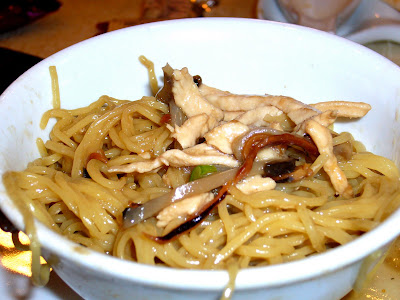 In a traditional Chinese dinner, it is common for a noodle dish to be served as the last course and it can either act as a good enforcement to the yummy dishes before it or it can be a spoiler. Unfortunately, Dragonfly Inn's Special Handmade Noodle was the latter. I don't know whose hand made the noodles or if that's that important but the noodles were limp and generally lacking in taste. 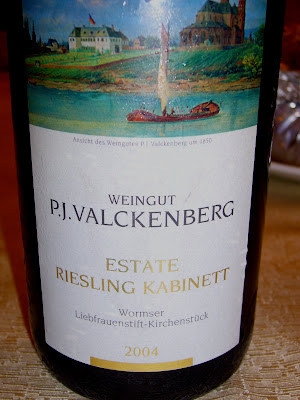 That night, I also had the pleasure of tasting two varietals that I've not had before. This bottle of Riesling Kabinett was shared by June and it had an intense taste of guava on the palate. Slightly fizzy and sweet, it was delicious. Oh and did I mention that it uses a glass stopper in place of a cork? More wines should be sealed this way!

The other varietal was Pedro Ximénez which Ivan had brought. A dark, almost syrupy liquid with a strong taste of molasses and slight hints of ginger and spice at the back. Very interesting.

I'm no Robert Parker but I'm just stating what I tasted and sensed. Please don't sue me.

Finally, thanks to Tony, Andrew and Alice for organising this dinner and to all who shared wines, company and laughter. 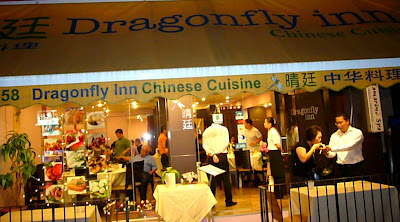 Chew On This: The next Makankakis Dinner for July will be on this Wednesday, held at An Fu Restaurant in Balestier but I won't be attending due to my Spanish paper the following day. Diners can expect authentic Sichuan food and I quote TTC here 'Not for the faint hearted.'
Posted by The Hungry Cow at 7:28 pm

This is Auntie Alice dropping by to say hello to you.

Do join us next month ok?

That's quite a lot of food....what was the damage like? Interesting chinese food places you go to....keep on flogging!

Alice: Hello! Sure. I hope I can make it for this coming one. Anyway, I think you can drop the 'auntie' tag. Notice I didn't have it in my post? Unless you really insist. :)

Bottomless pit: It wasn't too much of a damage at $30. Credit goes to the organisers who really suss out interesting food places. Dinners like this happen once every month. Do join us by signing up at Makansutra forum, under Makan Meetings.

Your fourth dish looks to me like pig's ears, which is delicious by the way.

indigo: Now that you mentioned it... it sure does!! Haha.