We live in a world where size does matter when it comes to certain things that our hearts desire and we secretly covert for. Anything less would mean not getting satisfied. But hitting the right spot would mean simply orgasmic. It was with this desire that led me to arranging the tryst.

A desire for a good 500g of steak. Forget scrawny flat pieces of cow with tonnes of mucky sauce slopped over for god knows what reason. When it comes to steak, thin is NOT in. Anything below 200g is a waste of time. An average 200g steak is decent but never feels enough. Morton's on the other hand, is a heaven which I hope to ascend just for the pure size and quality of their famed steaks. But that I will leave for a more special occasion.

Down to earth steaks which are affordably priced and have an acceptable standard of quality are few. Aston's Specialties is one such place, in my opinion, that serves them. So I contacted Aston and arranged for a dinner for 11. A dinner that consisted of three special orders- 500g ribeye at about 3cm thick. 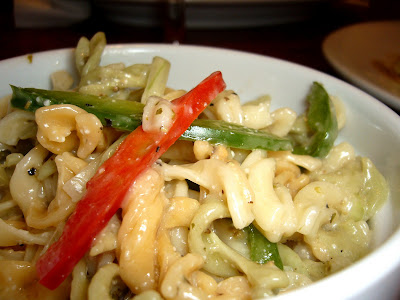 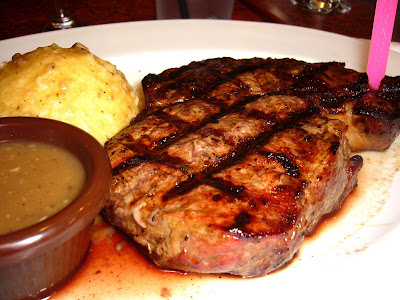 The sight of the 500g ribeye induced instant mouthwatering. It didn't look like a monster steak, after all it's only 500g. But the fact that it was twice as big, or should I say as heavy, as the Ribeye Extra Cut made its presence at the table more felt. 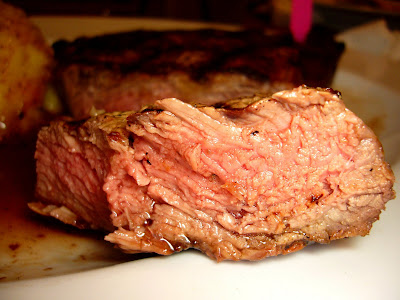 But I have to say that it fell below my expectations. My medium-rare was more of a medium and the bottom side of the steak was cooked longer than the other side, resulting in an unevenness.

Nonetheless, what I was happy, in fact very happy, about was the fact that despite it being overdone by medium-rare standards, I found the steak juicy and not as tough as the jaw muscle-building one at Hog's Breath. It could have been better but I'm not about to complain knowing that Aston had before hand informed me that the steak would need a longer time to cook and so because of a few friends who arrived late, the serving time was pushed back. This probably resulted in the overcooked part. Benefit of the doubt given. And I'm willing to give it another shot, or two. 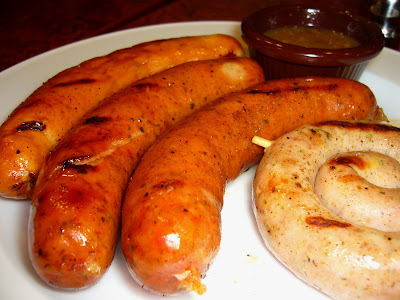 Gourmet sausages from Butcher House were also available here and we decided to share the Sampler which gave us a selection of four sausages. It was mostly a salty affair and pretty forgettable. I understand they no longer serve them.

And yes. Aston's Specialties have expanded from a 30-seater to about a 90-seater but the queues are just as crazy. I'm seriously planning another assault on the made-to-order steaks and maybe up the weightage. Size does feed the ego. 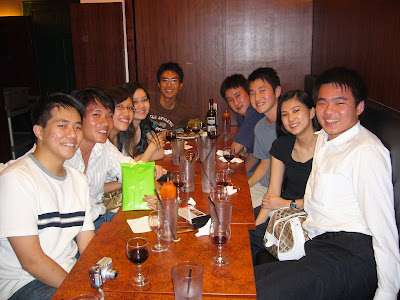 Happy birthday, Ryan! My tradition was in my favourite colour and with a support (push-up?) thingy, it's probably more kinky than the 'SARS mask'. Thanks a lot, you guys! 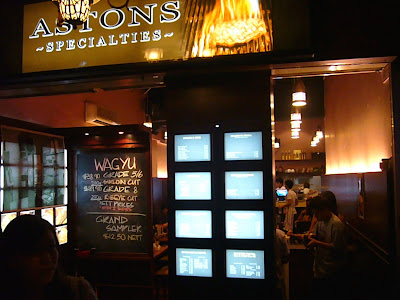 Chew On This: For those who wish to BYO wines, there's a $10/bottle corkage charge. Decanters and ice buckets are also available but I have to mention that the wine glasses are worse than those at Ikea. So those who are particular about glasses, should BYO too.
Posted by The Hungry Cow at 10:46 am

the Ribeye looks good dude. Does one have to call and order in advance or can the special order be made on arrival?

Yea, one has to call and request for the 500g Ribeye in advance. Hmmm..maybe I should call it the Hungrycow's Cut. Haha.

Oh and btw, the $25.90 I mentioned was before the GST increase. Not sure about the current price. Good to check with Aston.

There is actually something worst than the SARS mask?!

Yes Jassy, while the SARs mask will be inducted into the Hall of Fame, the bright-yellow-string-from-the-back-with-push-up-enhancer-and-a-front-pouch-to-clasp-the-whole-thing is simply in a class on its own. Remarkable.