The delay in posting was due to internet connection problems as well as the fact that I had tripped over my laptop's wire, causing it to fall onto the floor. Eek! Fortunately, the Toshiba's tough and my data seems alright... for now. But now on to finishing up a few more of my Thailand posts. And for those who are wondering... Yes, I'm back.

The search for a supper place brought us to Somboon Restaurant, just about a 10 minute stroll from the Emerald Hotel at where I stayed. The hotel concierge recommended it as 'popular with tourists for seafood'. Even though it sounded as dangerous as Newton Circus would be for a tourist, my stomach over-ruled both the head and heart. And so I took the bait. 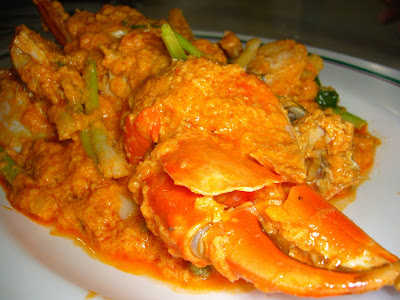 But I didn't know that the bait came in the form of Fried Curry Crab. This is purportedly the restaurant chain's signature dish. Lots of live seafood were on display just at the entrance of the restaurant so their claim to actually cook live seafood could be true as the crab was very fresh. Unfortunately, the sauce that smothered it was more sweet than spicy. I also didn't seem to detect any curry flavour.

This is the main reason why I don't rank Thai food as one of my favourites. I prefer savoury to food with a sweet tinge. Now don't ask me about macaroons. I can't explain that either. 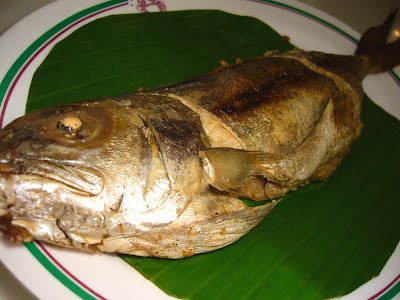 The Grilled Fish had a distinct freshwater taste and I was rather surprised that it wasn't covered in any strong-tasting sauce. The fish was meaty but there's no point of having all that meat when it's bland eh? I could imagine some ground chilli paste(hot, not sweet) being stuffed into its belly before cooking. After which, a sprinkle of salt and a good squeeze of a Thai lime would do the trick nicely. 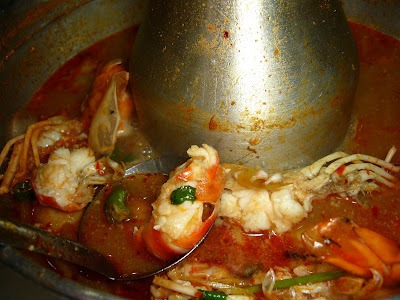 It seems that there's no escaping Tom Yum Goong here in Bangkok. The version here was relatively spicy and I liked the sourish tang. The crunchy prawns swimming in the soup were halved and still had their shells attached. Maybe that's why it seemed tastier. 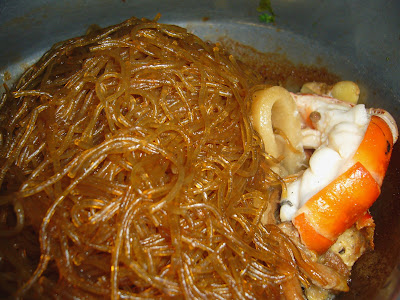 The 'Favourite Dish of the Night' award went to this dish of Grilled Prawns with Glass Noodles. The glass noodles (think tanghoon) had absorbed the flavours of the prawns, garlic and Szechuan peppercorns beautifully. Soft, slightly transparent and chewy, this was clearly the star of the night.

I forgot the prices of the dishes but the total for the above mentioned dishes including rice for five people came to 1,532 Baht. Looks like I need another Gingko power boost. 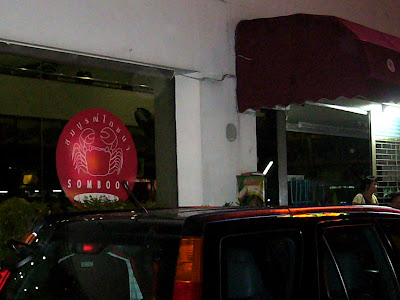