Ask me if I prefer to eat at a hawker centre or a food court and I'm definitely picking the former over the air-conditioned latter. Yes, hawker centres could be relatively dirtier, warmer and smokier than food courts but at least their food tastes much better and is cheaper too. I find food courts lacking in variety and the food that is dished up there seems to have muted flavours. And who can forget the 'food court' smell that clings to one's hair and clothes after a meal there? Not that I wouldn't eat at a food court but I'm not an advocate.

But having tried food from restaurants as well as road side stalls, I thought it would be a good idea to check out the food court here in Bangkok. The one I checked out was at Siam Paragon. This mall is huge and reminds me slightly of Ngee Ann City here in Singapore. Big name boutiques, including a Jimmy Choo, and big department stores entice already tired legs of tourists. I was surprised to see shop units taken up by BMW, Lotus and Lamborghini and used as show rooms complete with the cars themselves.

On the food front, the basement had all sorts of foods from local salads to sandwiches, bakeries, dim sum, sashimi and even kaya toast. Snacks ranging from popular Thai desserts to cakes to donuts and other tidbits seem to shout out at every turn and one can really expect severe caloric damage. Throw that diet out of the window. 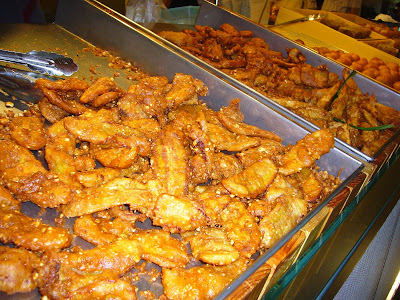 I chanced upon this stall selling fried goodies. Yes, almost everything fried is a goodie. Sticks of sweet potato, yam and slices of banana are coated in a light batter, deep fried to a golden glow and sweetened with sugar. The banana slices were fragrant and really sweet with a slight mushy centre. The sweet potato sticks were firmer but also equally delicious. The yam sticks were less sweet and more starchy but I like that it seemed to balance out the sweetness of the sugar nicely. Each type sells for 20 Baht which gives you eight pieces. 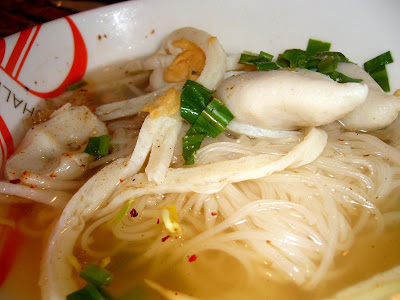 Fishball Noodles here are very different from the Singapore version. Here, the fishballs are oval-shaped and less bouncy. Long white strips turned out to be actually fishcake, sliced into strips. The soup stock tasted sweet. Condiments like fish sauce, coriander and chilli flakes made it more Thai. I'm not used to eating sweet fishball beehoon I guess. 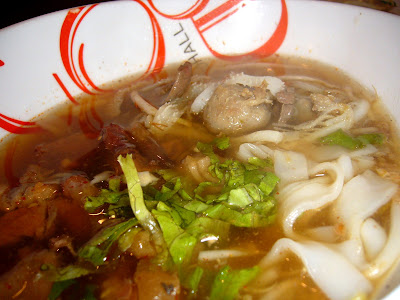 The Beef Noodles Soup had a very light broth with a slightly beefy taste. I liked the pieces of stewed beef which was so tender that its strands broke up with a gentle grip of the chopsticks. The beef balls (not the same as cow's testicles I assure you) had a good bite and could beat many of its counterparts in Singapore. Also included were strips of beef tripe as I had ordered the 'mixed' option which provided a bit of everything. 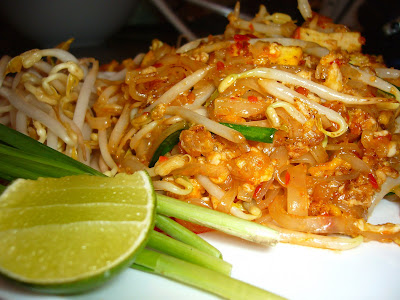 By now, Pad Thai has become one of my favourite foods here in Thailand. It could also be one of the most consistent foods here. Almost every Pad Thai that I've tried seemed to be delicious. And the one here at Siam Paragon food court was no exception.

The food at the food court here costs about 50 Baht per dish on average.

Chew On This: Don't pass Baht to the individual stalls, instead buy a stored value card from the counter and use this to make payments for your meals at the food court. The remaining value is fully refundable. 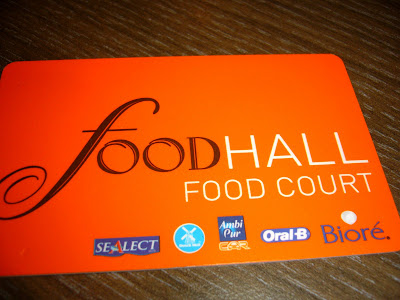 Have yet to try the pad thai at this foodcourt you mentioned but i'm totally agreeing with you on the 1-of-my-favourite-food part! And i'm really regreting that i didn't get to try those from the roadside stalls of Khao San too! :/

Roadside stalls are often under-rated. Concerns over poor hygiene makes it worse but if the stall has many patrons and the food is cooked through and served hot, it should be a safe bet. Go give them a try the next time and see what gems you discover.

Yea, I'm happy to be finishing up on the last few Bangkok posts so that I can post the remaining back log. Thanks for your support and stay turned!

The stuff in the blogs blows out my mind. hero tower hyderabad

It's been good to see your blog when I always look for such type of blogs. It’s great to discover the post here.
hero construction

This is one amongst the informative blogs that you shared with us.
construction company

Nice answers in replace of the question with real point of view and explaining about that.
area codes uk

I'd be trampled if all sites gave articles like these awesome articles.
old pakistani songs
romantic songs

Hi to everybody, here everyone is sharing such knowledge, so it’s fastidious to see this site, and I used to visit this blog daily.
business IP cameras

I constantly emailed this site post page to all my friends, because if prefer to read it then my all friends will too. camera poles

Excellent Blog! I have been impressed by your thoughts and the way you
www.telephonecodes.org

I really enjoy reading and also appreciate your work.
telephonecodes.org

I wish more people would post valuable content like this. This is the first time I've been on your website, but after this, I doubt it will be the last time.
Low Rate Locksmith Sacramento ca

Keep the ball rolling you have done the great job here.
telephonecodes.org

This text may be value everyone’s attention. How will I learn more?
Search Engine Optimization

Loved your blog page!!!The stuff that you have remarked up here is superbly wonderful and I vigorously thank you for the same...
Scott Lanzon Knoxville Attorney

Excellent Blog! I have been impressed by your thoughts and the way you
cr plastic products

You fully match our expectation and the selection of our data.
www.telephonecodes.org

Good blog along with the excellent quality stuff and I’m sure this will be greatly helpful.
Scott Lanzon Knoxville

It’s amazing in support of me to truly have a web site that is valuable meant for my knowledge.
dg tooth paste

Hi I was searching for the blogs for many times, now I have reached at the right place.
WEIGHT LOSSTHERAPY

Your way to enlighten everything on this blog is actually pleasant, everyone manage to efficiently be familiar with it, Thanks a great deal.
Casino Games

Hey to everyone, it’s my first visit of the blog site; this blog includes awesome and actually best info for the visitors.
home security systems

Excellent Blog! I have been impressed by your thoughts and the way you
construction dumpster new york


Hey to everyone, it’s my first visit of the blog site; this blog includes awesome and actually best info for the visitors.
visit

Your articles are very well written and unique.
http://www.FastlaneCentral.com

Just saying thanks wouldn’t just be enough, for the fantastic fluency in your writing.
construction dumpster atlanta

This is a great post; it was very edifying. I look ahead in reading more of your work.
Benistar fraud

I will prefer this blog because it has much more informative stuff.
food court in hyderabad