Lunch On Board Thai Airways 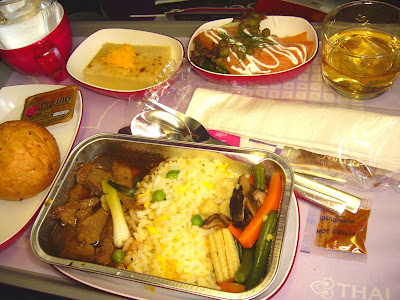 The words 'aeroplane food' may seem to cause most people to stick out their tongues in disgust but I actually like food served on board the plane. Actually, I even look forward to them.

So imagine my delight when I found out that I was going to have lunch on board Thai Airways on my flight to Bangkok.

I was leaning forward to make out what the stewardess was rambling out to the passengers three rows before me. "Chicken or lamb?" I heard. Easy choice I thought and had the word 'chicken' on the edge of my lips. But by the time it came to my turn, it became 'lamb or lamb'. Apparently, chicken had already ran out.

The lamb was surprisingly tender and even though there was the lambness, it was not overpoweringly scary. The fried rice was edible but don't expect any of that wok hei (smokey flavour imparted by the hot wok).

The most outstanding item for me was the starter of smoked salmon with capers and lettuce. Eaten with the bread roll, it made for a tasty little sandwich.

The desserts failed horribly though. It was some sort of custard with unidentifiable yellow strands on top. Too sweet. Too rich. Too jelak (cloying). I would have preferred fresh fruits.

Luckily, Bangkok (and better food) was a mere 2 hours away.

Chew On This: From what I can remember, most airlines usually offer two choices for mains, one Asian and the other Western. But both of the meals (chicken and lamb) offered on board this flight were Asian. Hmmm...
Posted by The Hungry Cow at 4:13 pm