While making a suit at a local tailor, one of the staff recommended this Thai restauarant near-by for lunch. Being already 2pm and the fact that we were hungry, we scrabbled in, placed our orders and waited. 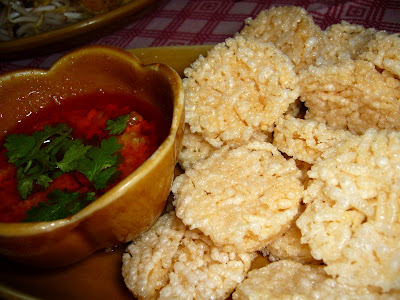 Minutes later, the first dish to arrive was the Rice Crackers with Minced Pork Dip (65 Bhat). While the dip looked fiery and the layer of volcanic red oil was intimidating to some, it turned out to be, as you might have guessed by now, sweet. Bits of minced pork provided some texture while the slight coconut fragrance permeated the sauce. The rice crackers came in small round discs which looked cute and was easier to handle compared to their bigger, square counterparts. 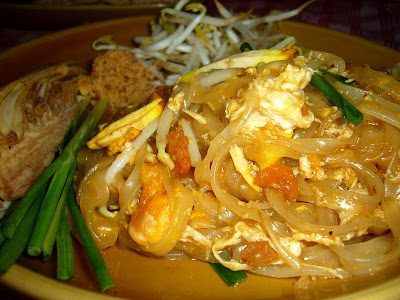 Pad Thai (45 Bhat) here was a little more moist compared to the rest I've tried. Think of moist as in moist char kway teow. Yum. I still can't take to the taste of raw bean sprouts but I think the locals here like it. Fortunately, the raw bean sprouts were placed nicely aside. 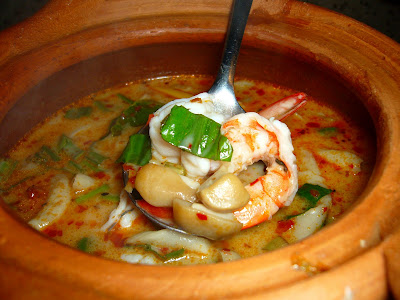 The Tom Yum Goong (100 Baht) had a very 'fresh-bursting' taste and the small shards of leaves and herbs certainly made their presence felt. But I felt the soup was a tad too sour for my liking. Average prawns aside, what I did enjoy was the fresh mushrooms that were added. I'm not a big fan of canned straw mushrooms but the fresh ones in this pot were delicious. No briny aftertaste. Instead they were earthy and naturally sweet (not sweet in the sugar sense). 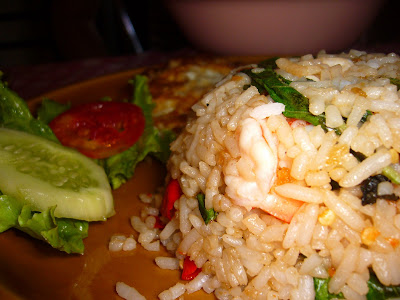 This dish was actually a mistake. We thought it was stir-fried prawns with chilli but it turned out to be Fried Rice with Prawns and Chilli (45 Bhat). Communication can be quite a problem when they don't speak English and we don't speak Thai. But hungry people were not about to let a dish leave the table.

The fried rice had a spicy kick. Sort of like a chilli padi (small red chilli which is known for its fiery hotness) kind of kick. Thankfully the slices of cucumbers at the side came in handy. The prawns were few and generally hiding in the mound of rice. A fried egg was tasty companion.

A few hawkers had stalls outside this restaurant and you may order from them and eat in the restaurant together with the rest of your food.

Now back to the tailor and I hope the measurements are not affected. 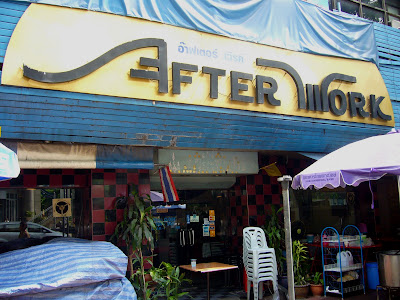 Chew On This: After Work has live bands playing on certain nights.