Mooooo. I'm back. After the horrible three weeks plus of exam stress and deadlines, comes the glorious summer holidays (if we in Singapore even have a summer). And my chance to eat hard to 'compensate' for those Campbell's, hot chocolate and instant noodles-nights.

Aunty Ellen (not my real family-related aunty but we commonly address our seniors as 'aunty' and 'uncle' don't we?) flew in from Hong Kong to visit her mum for a couple of weeks and I thought it would be nice to meet her after not having seen her in a long while. So together with Family, we hopped down to Blue Lobster along Frankel Avenue for dinner.

And what a dinner it was! Great company, lovely food, heavenly desserts, not-to-be-missed promotion and a polished yet relaxed ambience provided one of my best meals in recent history. So be prepared for a long-ish post. 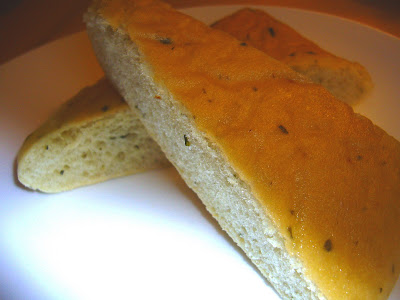 To start things off was the complimentary lightly-toasted focaccia bread. The restaurant people claimed the bread was made in-house. It tasted fresh but I would have liked a stronger dose of rosemary. Good to note was that the olive oil from the bottle on the table provided an uplifting, fragrant touch to the bread. Almost addictive stuff. 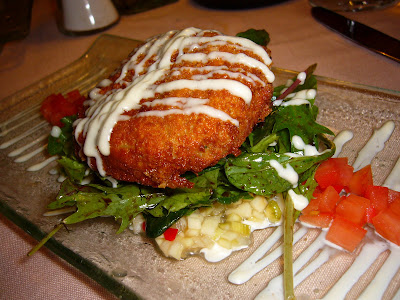 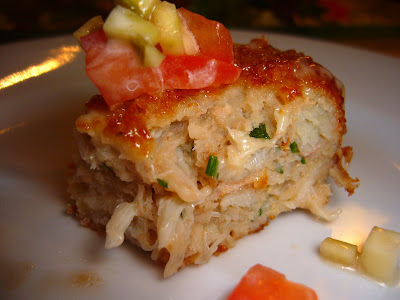 I thought the spicy mango and water chestnut salsa went very well with the crab cake, imparting a refreshing sourish-sweetish counterpoint. The lemongrass aioli was weakly infused with the herb and became just like icing on a cake, without the sweetness that is. 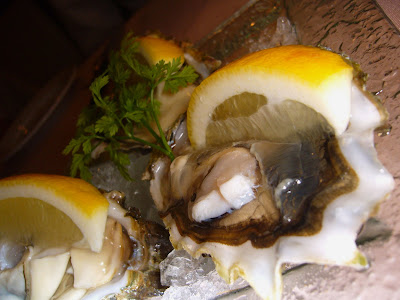 I haven’t learnt to appreciate Oyster ($3 each) but Mum said while these were undoubtedly fresh, they lacked the sweetness that she was hankering after. 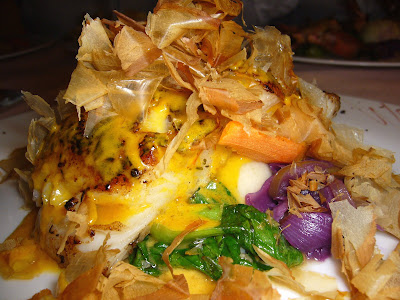 Aunty Ellen and Sis each ordered the Pan-Fried Black Cod with Saffron Sauce with Mixed Fruits & Red Cabbage, Topped with Sweet Wasabi Sauce ($30). Aunty Ellen, still feeling stuffed from taking a bite before the meal generously gave me 3/4 of her cod. The cod tasted fresh and distinctively oily. The flesh was firm without being over-cooked. I loved the slightly sweet-savoury saffron sauce that was poured over the fish. The mountain of bonito flakes provided an umami taste. Under the cod, it was more like purple cabbage than red but we aren’t here to complain about different coloured cabbage, no? 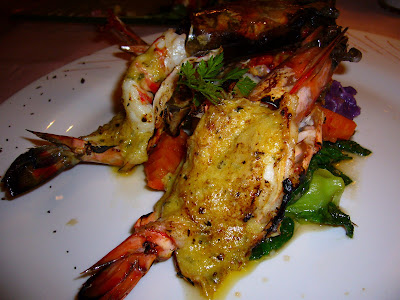 Mum had the Char Grilled Wild King Prawns with Herbed Butter and Garlic Rice ($35) but she had the garlic rice substituted with a side salad (not shown above) instead. 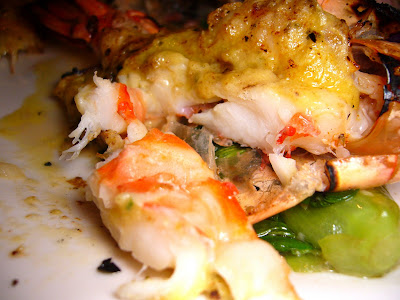 The prawns, moistened by the herbed butter, were succulent. However, consisting of just three prawns, I felt that this dish was expensive and would not make a substantial meal by itself even though the prawns were relatively larger than the average prawn out there. 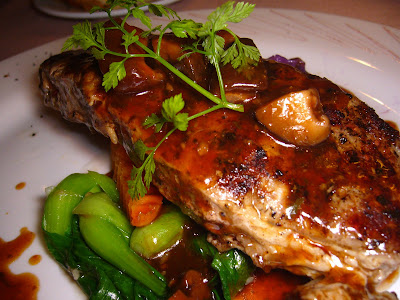 Dad was unable to get his hands on the Rack of Lamb as they had ran out. So he took the Char Grilled Hokubee Grain-Fed Beef Sirloin with Truffle Mash & Asparagus, Cepe Mushroom Sauce ($32). Ditto for myself except that I wasn’t planning to order lamb. 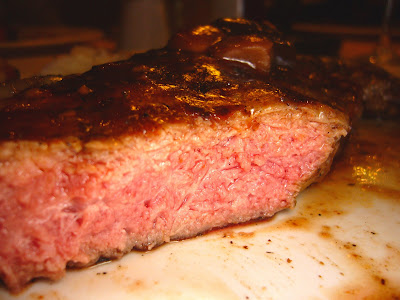 It was my first time eating Hokubee (whatever the name means) beef and perhaps because I like my meat tender but yet still retaining a meaty texture, I did not really enjoy this steak. Edible? A definite yes. No question about it. However, I found this Hokubee steak to have a cottony texture and was tender to the point that I got uncomfortable. In fact, it did not feel like eating beef. I prefer some muscle fibers and resistance to my ever-eager canines. A meat too yielding makes it pointless to masticate. Might as well go eat fish. 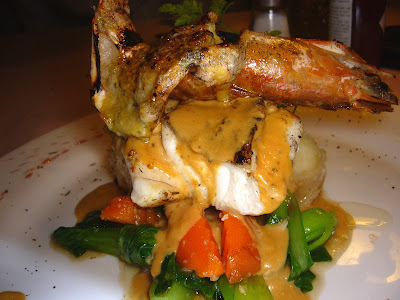 My second main course was the Premium Trawler Catch of the Day ($30). For that day, it was Red Coral Trout from New Zealand. Tasty and with a slight sweetness, the trout was delicious though not as oily as the cod. Once again, the sauce does magic with its buttery and savoury notes. The Premium Trawler Catch of the Day comes with a grilled wild king prawn. 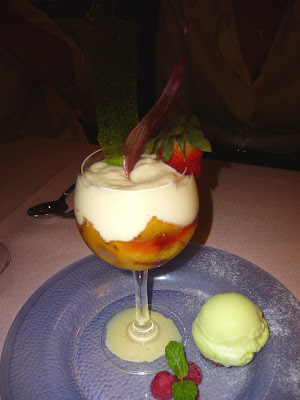 For a person who would rather go for another main course or side dish instead of dessert, I simply fell in love post-main course. The Peach Gratin with Mascarpone Sabayon & Lime Sorbet ($9) was indeed so damn good. Slices of peach infused with some kind of liquor and blanketed by a mascarpone-cream mixture that helped to provide a rich, creamy background which also tamed the alcohol a little. I don't know what liquor was used but it sure packed enough punch. The lime sorbet was very refreshing and creamy. An excellent palate-cleanser, me thinks. 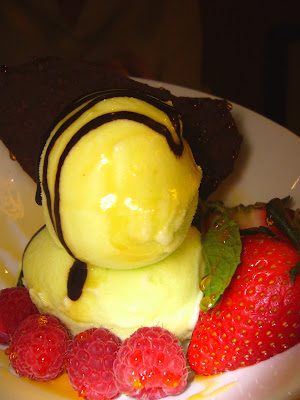 We liked it so much that we requested for an additional two scoops. And those two scoops came prettily adorned with fresh raspberries, strawberries and chocolate sauce. It was certainly more than what I had expected. 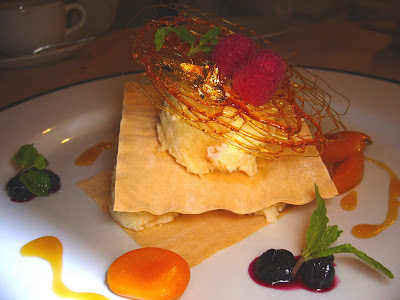 Being a fan of Tiramisu, Aunty Ellen requested for the Feuilletes of Limoncello Tiramisu with Filo, Candy Kamquats and Blueberry Compote ($9). When presented with this dessert, I had actually thought they brought the wrong dessert out. It looked nothing of what I had in mind. This is Tiramisu? And because I was still through my Red Coral Trout, I didn't get to taste this Tiramisu proper. But from the small spoonful of the cream thingy between the filo sheets, the limoncello was certainly there. Aunty Ellen really likes her dessert and though she didn't take to this version of Tiramisu, she was happily eating. And I thought she was full from an earlier bite. Ahh... Behold the power of desserts.

If you look closely, you'll see gold flakes on the top. That provided quite a bit of debate at the table. 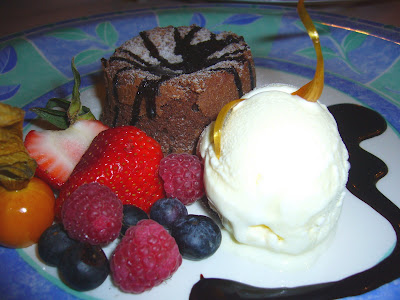 Already a favourite with many diners around and also almost as ubiquitous as say, chocolate fountains at buffets, the warm chocolate cake with molten chocolate inside is also available here. Known here as Valrhona Chocolate Fondant with Seasonal Berries, Vanilla Ice-Cream & Double Fudge Coulis ($12), this rocks! 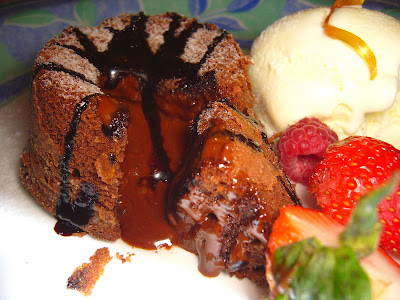 It wasn't really sweet over all which I very much appreciated. The floury chocolate cake had a slightly hard crust on the outside but break it with a spoon and out oozes pure chocolate heaven. Dark, sensual and rich, the molten Valrhona chocolate melted my heart. The vanilla ice cream was normal, nothing fantastic by itself but it complemented the rich chocolate well. And so did the tart berries.

Generally so far for me, the desserts here at Blue Lobster are fantastic. Expect heavy doses of liquor (nice!) in some of them. The pretty coloured swirls and sheets of pulled sugar also added a whimsical touch. Chef Jazz who helms the desserts certainly takes pride in her work of art and it is evident that she enjoys what she does. According to her, the desserts here are supplied to and can be found at Fish Tales, Fins and Greenwood Fish Market & Bistro. Oh and Chef Jazz advises against eating too much of the pulled sugar works of art as they can numb one's taste buds, interfering with one's sense of taste temporarily.

In closing, Blue Lobster serves up pretty fresh seafood, good food and fantastic desserts. A bit of fusion influences can be observed in the food here but they have not been conflicting. The chef, apparently formerly from Shangri-La, has solid grounding in his cooking techniques. The ambience and setting is slightly dim and old but it still has that posh yet less formal element. It is cosy enough for a date and casual enough for a good meal between family and friends.

My only gripe was that the Indian gentleman who attended to us could have been more professional in his service, given the restaurant's image. But I applaud him for at least making the effort to chat with the guests and making rapport, even with his out-of-placed prata-stall mannerism. The food also took quite a while to arrive, so be prepared to wait for a bit. Maybe that's what the complimentary bread is for! 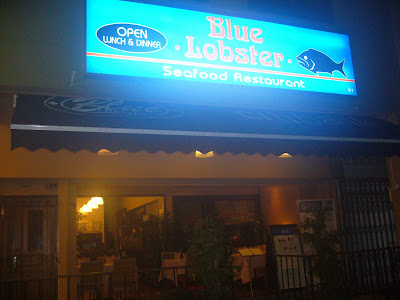 Chew On This: OCBC Platinum and HSBC card holders are entitled to a one-for-one main course deal!
Posted by The Hungry Cow at 5:55 pm

just googled "hokubee" and got this:
http://www.meltiquebeef.com.au/
it's beef injected with "soluble oil" to imitate the marbling of wagyu...

hxy: I got that too when I googled! I don't know about you but that idea sounds freaky to me. Haha.

Your blog always leaves me hungry...