Pulled. Neither Shaken nor Stirred.

Unlike Bond in his latest movie, I do have a preferrence over my drink. 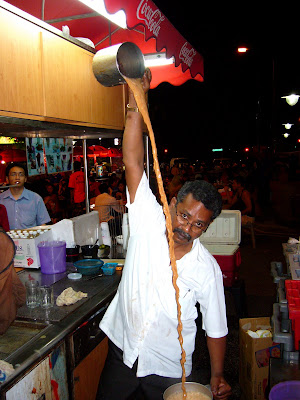 Tea. Pulled please. Teh Tarik literally means pulled tea in Malay and is one drink that, when done well, can be an instant source of comfort and satisfaction. Strong tea, condensed milk and sugar are poured to and fro from one metal pot to another from a considerable height. And with gusto too. This 'pulling' of the tea mixes the components and also aerates the drink, resulting in a well-mixed and frothy drink that has won many fans. 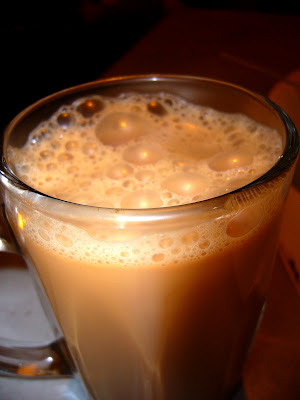 I haven't had the Teh Tarik here for a long time and so decided to head back for a revisit. It did not seem to pack the same punch as it did YEARS ago. If there does'nt seem to be much froth in the above pic, it was because I had fiddled with my cam and chatted quite a bit before the shot was taken. To call it horrible muddy water would be unjust and untrue but I still prefer the more robust, less-watered Teh Tarik of old from this stall.

Time to clear all the rubbish reports and start studying for exams! Expect blogging to be more irregular and probably less frequent these few weeks. Tahan a bit ya. 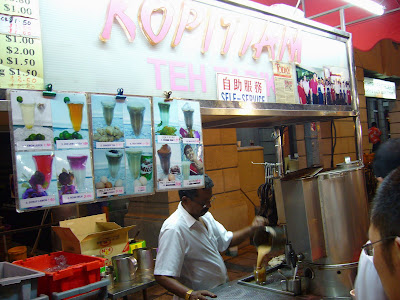 Chew On This: You won't find pictures of celebrities here but of well-known politicians.
Posted by The Hungry Cow at 12:17 am

Teh tarik is teh bomb! My absolute favourite beverage at what us msians call the "mamak" stall! (Now you can add mamak to your list of malay words!)

Happy reporting, and continue to update us on the fantabulous foodstuffs SG offers! ;)

Hello Eugene, thanks for dropping by at my humble blog. Glad to hear from another teh tarik fan and it makes me wonder if there's a difference between teh tarik here and in Malaysia?