Another Blow From the West: No Knock-Out This Time 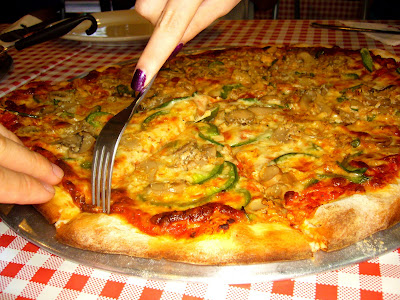 Well it's got to be a surprise that I'm yet blogging about a place in the west, twice in succession now. This time it was Daniel's invitation for his birthday dinner held at Rocky's (No, not Sylvester Stallone.) Pizza.

In the Rocky's, a battle between the fastest finger and the manicured one for the dough raged. The more civilised ones watched as lightning flashed from the Lumix FX3. Roars from angry stomachs deafened thunder.

After this blogger got his shots, all around the table reached for a slice and ate quietly. In fact, partly also because of the angry grumble of my stomach, I didn't get as many shots as I had wanted. A constant battle between hunger and patience, hand and stomach, needs and desires.

Seven of us shared two X-Large 16" pizzas. The Kentucky's Nest ($25.40 for X-Large), shown in the picure above, had chicken, green peppers, mushrooms and cheese. I felt this lacked flavour. 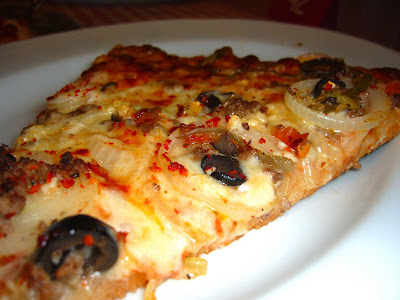 On the other hand, the Mexican Sunrise ($30.20 for X-Large) was more flavourful. Beef, onion, olive, jalapeno pepppers, garlic, chilli flakes and cheese topped the pizza. I like the heat from the jalapeno peppers but a few felt it was a little too hot. The melted mozzerella cheese had a stringy-like consistency when a slice was pulled from the rest of the pizza. 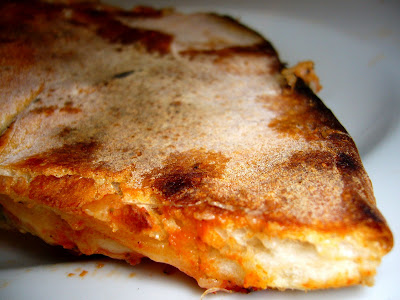 The pizza base was pretty good. It was thicker than the thin-crust type but yet thinner than the thick pan-pizza variety. Soft and chewy, it made for a solid base. Small burnt spots added a slight 'burnt' aroma which was inviting. Kind of like the base of a good claypot rice.

Rocky's Pizza wasn't too bad. But I would have liked more tomato paste and a stronger flavour. For me to travel from the east just to eat this pizza on my own? Probably not, unless I'm invited by a friend. 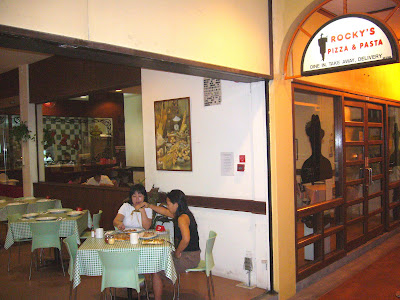 Chew On This: Rocky's Pizza claims it 'evolved from the many pizzerias scattered throughout Italy'. But some how it feels more American to me. Blame it on globalisation. Bleah.
Posted by The Hungry Cow at 6:41 pm