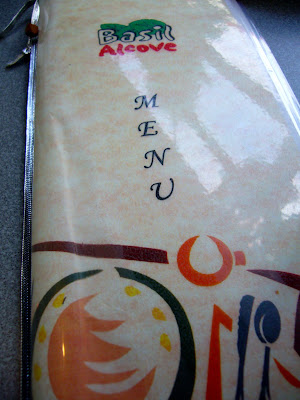 It's surprising to find what's in my backlog of posts to blog about. It's even more amazing to literally find Basil Alcove. Jenny, Ewan and I had walked past it without realising. But it was probably as the place was closed at that time.

Basil Alcove is a small hole-in-the-wall kind of restaurant. The inside only seats about six people comfortably, the majority of the patrons dine al fresco. I recommend the al fresco option. On a cool evening, sitting out beside a busy road can really help unwind. Helmed by Chef Xander, who by the way is 24 years old, Basil Alcove has been touted to serve 'budget gourmet food' by some. Don't let his relative young age fool you. I think he has creatively good potential.

So after we found Basil Alcove's exact location, we returned the following week with the League to try them out. 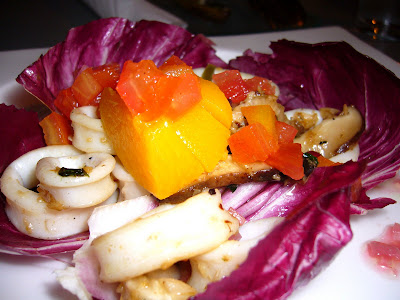 Unfortunately, quite a few items including the soup and the salads ran out. But we did manage to get a Red Chicory Salad with Squid ($9.80). The salad was an interesting combination of slightly bitter red chicory, sweet slice of peach and tangy chopped tomatoes. The squid that came with it was rather bland and I think could benefit from a quick grill to give an added smoky dimension. 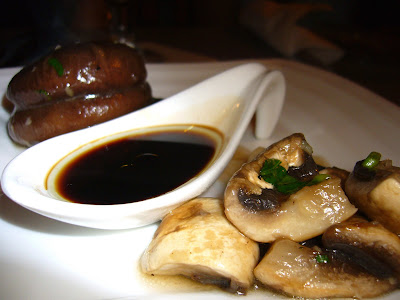 The next shared starter was the Mix Mushrooms ($6.80). Simply but elegantly plated were a few pieces of sauteed white button mushroom pieces and two whole shitake mushrooms (one stacked on the other) separated by a serving spoon filled with a balsamic dressing. I quite like this simple starter with the unmistakable earthy notes of the fungi tamed a little by oil and balsamic vinegar. 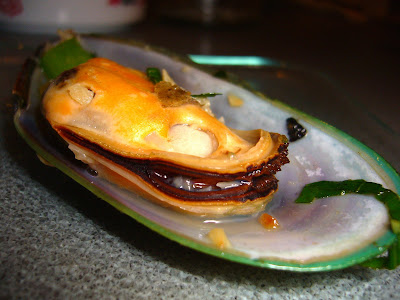 The Mussels ($4.80 for 1/2 dozen) were sweet and slightly chewy without being like rubber. Without any fishy smell and with the company of chopped garlic and parsley, I think this is one happy mussel. I'm no big fan of shellfish in general but this mussel I like. 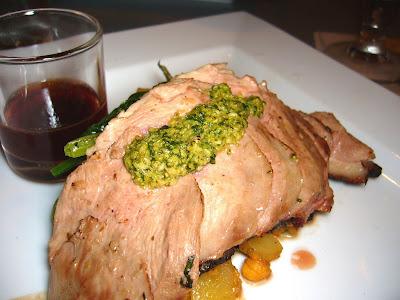 For mains, I ordered one of their three highly-recommended dishes (Duck, Cod and Lamb Rack), Basilico Duck with Pesto Oil and Red Wine Dressing ($13.80). In fact, I was surprised when asked how I would want my duck to be done. You mean I had a choice for duck doneness? It was my first time. But I was a tad disappointed when my medium-rare duck looked over-done with the more brown than pink flesh. Tasting, however, proved that the duck was still tender and more interestingly, had less of the gamey taste that I had come to expect from ducks. But because of this gamey loss, I felt that the duck fell short of the factor that most people eat game for. The balsamic dressing (dubiously seems the same as the one for the mushrooms) and the pesto oil added a nice touch to the otherwise flat-tasting duck.

The rest of the mains were ordered by the League members who went and I had just a bite of each in quick succession. As such, I'll not write too much about them. 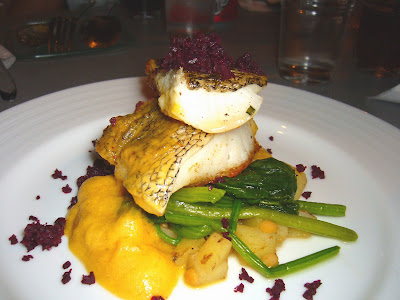 Jenny had the Pan-Baked Cod with Beetroot Cavier (I think they meant Caviar) and Balsamic Onions ($16.80) which I felt was a rather generous portion of two fairly thick slabs of the fish. The beetroot cavier turned out to be finely chopped beetroots that provided a globular albeit grainy feel in the mouth. 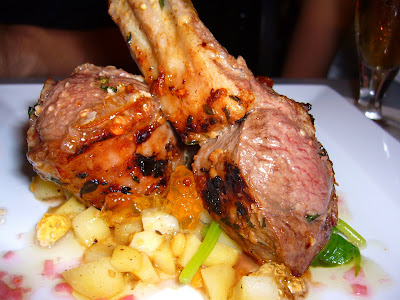 Ewan decided on the Roasted Lamb Rack ($16.80) which was sufficiently tender and had just a mild lamb taste. This lack of powerful lamb taste in the meat appealed to me. 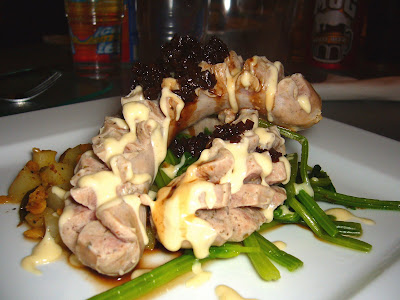 Neil went ahead with the Bratwurst Sausage with Balsamic Onions and Dijon Mustard ($8.80). I was horrified to see the Bratwurst cut in a criss-cross pattern similar to that of some squids and mangoes. Cut = Ripped Skin. I love sausages and I feel that no dignified sausage worth its skin should be allowed to be cut this way. It just takes away the joy of clamping down on a taut skin and hearing the snap of a crunchy sausage. 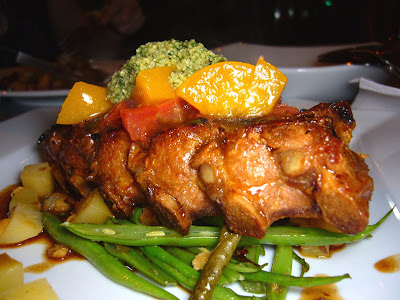 The BBQ Pork Ribs ($10.80 for Small) went to Ivy. Lesson of the day: Dainty girls should not order ribs. 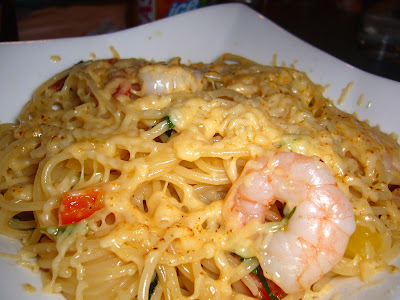 Hushie ordered the Shrimp with Orange and Basil Sauce Linguine ($8.80) which was really nice. Melted cheese and juicy shrimps... need I say more? 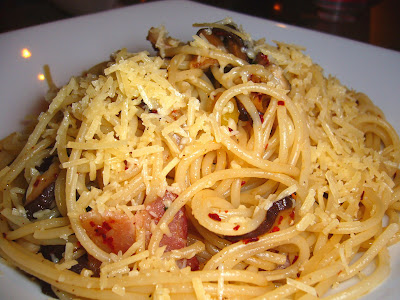 Over-all, what I felt proved to be the winners that night were the pastas. The Mushroom and Bacon Aglio ($5.50) which the table shared was also equally well done with the flavours of the olive oil, bacon and garlic shining through. And at $5.50, the price can be comparable to places like Pasta Mania.

With curry-spiced potato cubes and Phuay Leng (literally translated as Flying Dragon but it really is a spinach variant) that were the sides of most main courses, I can't help but suspect that a little fusion influence was at hand. Most of the stuff such as the balsamic dressing, beetroot cavier, curry-spiced potato cubes, phuay leng, pesto oil and tomato cubes on one dish re-appeared on another. But I don't blame them as their kitchen size is smaller than some toilet cubicles. Instead, I'm held in awe at the number and quality of dishes that the tiny kitchen churns out. Truly amazing.

It would be useful to know that Basil Alcove does not accept any other forms of payment except cash so be prepared. Not that the meal would cost an arm or a leg anyway. 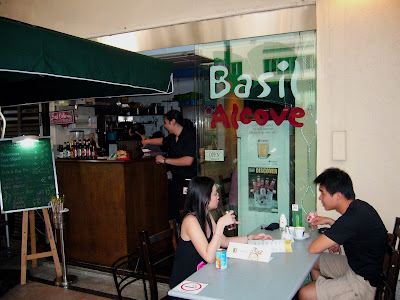 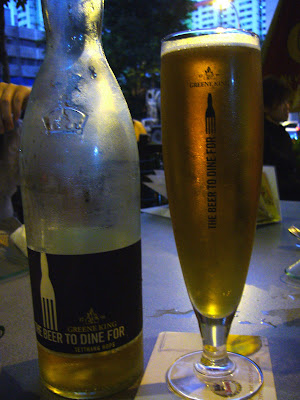 Basil Alcove also has a number of beers that are pretty unusual. Ewan and I shared the Beer To Dine For ($14.20 for 750ml). This beer brewed with Tettnang Hops, tasted light and fruity. Definitely refreshing and a hit with the ladies.
Ewan has told me that Basil has some problems with the import of this beer and so currently does not serve it. But fear not as other equally intriguing ones are also available.
Posted by The Hungry Cow at 8:58 pm

Whoa! The pictures turned out really well this time! Haha, this proves that the serviette technique does work aye? And i'm missing the abso-freakin'-good mushroom aglio olio already! Maybe we can also try out the aglio olio place near china square soon?! :D

Hey thanks, I'm still working on it. At least no too dark or too glaring kind of pics. :)

Which place near china square?

i think the place is call aglio olio and its situated at china sq central... apparently it serves italian pasta with a local twist.. one can choose from 4 levels of spiciness for their pasta! Not sure if its good, but the location is tempting already! *lol*

Now i really should have taken the frickin bottle home!

Peishan: I see...interesting. Let me know when you wanna try. Of course Chinatown/Outram area sounds good to you! Haha.

Neil: Ah... yeah. But if you want we can always drop by again when they have it in stock. I want more pasta this time!