The theme for this Local Food Trip organised by NTU's Deli Aprecio Club (DAC) was 'Feasting On Reviews- Simply good or Over-rated?' Held on 27th December 2006, a total of 20 participants were brought around to eat at some stalls that have been rated as good or recommended by those TV food programmes.

The first stop was at Hong Lim Food Centre. There, the participants had Char Kway Teow from Outram Park Fried Kway Teow, Ipoh Hor Fun from Tuck Kee (Ipoh) Sah Ho Fun and Bak Kut Teh from Zao Shi Bak Kut Teh. Besides getting to taste the food, the participants were briefed on some interesting facts about the respective food and their stalls. (Being the emcee and one of the organisers, I had to do a little bit of research so that I could share some info with the participants) 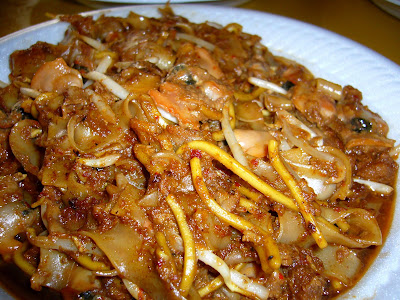 The Char Kway Teow ($3) was wonderfully moist and 'humful'. Those who like the taste of bloody, juicy hum (cockles) would go crazy with a plate here. Others like me who do not appreciate them had to stack a mountain of cockles a side and hope not to accidentally bite on one. The smell of lard, sweet sauce and garlic in a hot wok was really quite a treat. In the past, Char Kway Teow was originally fried in lard which renders it unhealthy but it was initially eaten by labourers and coolies, providing a good source of much-needed energy. Due to increasing health awareness, some stalls have replaced lard with vegetable oil. This stall has been Char-Kway-Teowing for more than 50 years. Talk about having a past. 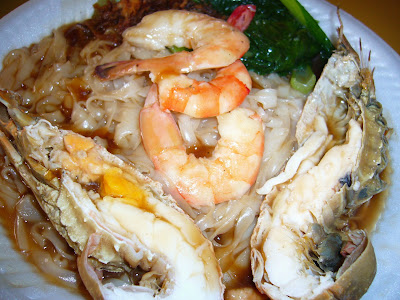 The Ipoh Hor Fun ($4) had smooth ribbons of hor fun and came with a few generous pieces of prawns and two halves of a crayfish. I would have preferred a more concentrated version of the light gravy which was made with chicken and seafood stock. This stall has been in business for 25 years and operates only for lunch. So if you are sick of eight-to-five jobs, maybe it's time to sell Ipoh Hor Fun! Nah, kidding. A lot of preparation work goes into the hours closed for business. 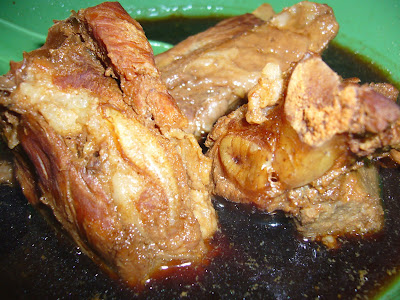 There are mainly three variants of Bak Kut Teh here in Singapore- Hokkien, Teochew and Cantonese. The Hokkien version has a darker soup (due to more dark soy sauce) as Hokkiens tend to prefer salty food, the Teochew version is lighter in colour and taste predominantly of white pepper and garlic while the Cantonese version has a more herbal touch due to the soup-loving nature of Cantonese and the belief that such herbs enhance one’s health and wellness. The one here that we tried is Hokkien. The pieces of pork rib were soft yet firm enough to provide some resistance. But I personally prefer the Teochew version of the soup. 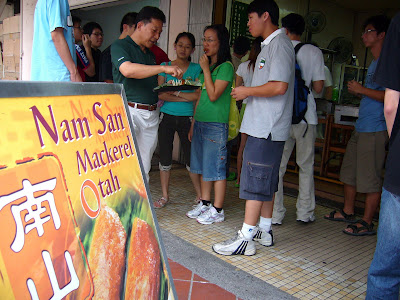 After the lunch stop at Hong Lim, we headed to Nam San Otah Factory in Joo Chiat. Here, Mr Jaffar gave us an insight into the making of Otah, its various ingredients, how Otah has evolved through the years as well as topics such as food preservation and business processes. Apparently long ago, Otah was made of leftover scrapes of fish that were unsold. To add colour and flavour, preservatives and colouring were used. But his Otah is different. He uses premium fresh mackerel sans the preservatives and colouring. Spices such as fresh turmeric, chili, blue ginger and lemongrass are used to flavour and colour the Otah. This is the main difference between the Otah here and those that sell three for a dollar.

I found his Otah fresh and the blend of spices worked well with the flesh of the mackerel. But I realised that the smoky aroma from grilling the Otah over charcoal was missing. I later found out from Mr Jaffar that the Otah here is grilled over an electric grill rather then charcoal due to the former giving a more even distribution of heat and concerns of health issues. But those like me who like the smoky 'charcoal' aroma would agree that food cooked over charcoal tastes better somehow.

The next stop was at Golden Mile Food Centre where the participants ate Chin Chao from Zao An Granny Grass Jelly and Tang Yuan from Ah Balling Peanut Soup. 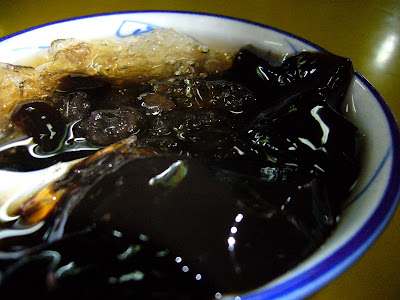 The Chin Chao (aka Grass Jelly)($1.20) had a firm texture and a slight taste of erm...Chin Chao. How better else to describe Chin Chao? For those who may not know, Chin Chao is made from boiling leaves of the Mesona Chinensis plant with Potassium Carbonate. The resulting liquid is then cooled to give us what is known as Chin Chao. Mesona Chinensis is a member of the mint family. It is believed to aid in digestion and detoxification. Eating this dessert feels sooooo good on a hot day as cold blobs of jelly slides down a parched throat. And the granny who started this Chin Chao business did so in 1945! Wasn't that like Second World War? 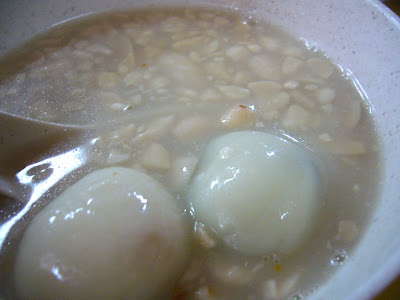 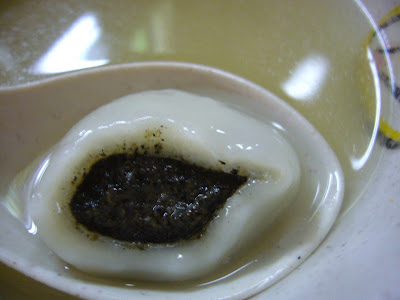 The Tang Yuan (aka Ah Balling)($2 for four) came in either a sweet peanut soup or a ginger syrup, which I prefer. Each participant had a choice of four types of Tang Yuan- red bean, black sesame, yam and peanut. In this age of machines, it was good to know that their Tang Yuans are still handmade. Each glutinous rice ball was chewy and I liked the texture upon each bite. Of the different fillings, my favourite was black sesame. Sweet and nutty, it burst forth after a bite. 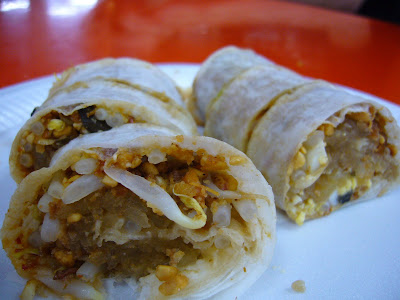 Popiah at Lavender Food Square soon ensured. This stall was formerly from Long House and also sells fried carrot cake which I'm also a big fan of. The popiah was packed with the usual ingredients like boiled eggs, chopped peanuts, beansprouts, stewed turnip and the works. It was rolled into a decent size, without being too thick. The skin held well. 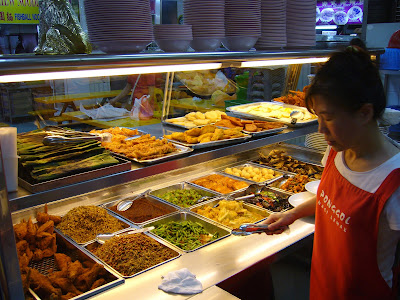 Dinner was at Ponggol Nasi Lemak Centre over at Upper Serangoon. This 'centre' draws long queues daily so expect to wait. Patrons get a choice of dishes to pick to eat with their nasi lemak. The price depends on the dishes selected. The most sellable item has got to be the chicken wing ($1.20). It was crispy and well-marinated. The rice itself exuded a light coconut and pandan flavour and wasn't too oily. The sambal chili that accompanied it was spicy and slightly sweet. Overall, I think it's good especially if hunger or sudden cravings hit at night since this stall opens til past-midnight. 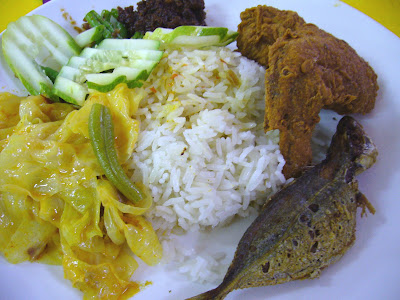 The original plan had more places and food but due to constrains of the budget and that of many stomachs, it was slashed to this final outcome. I certainly did have fun organising this event and hope the participants did enjoy and learn as much as I did.

And here are the stalls mentioned: 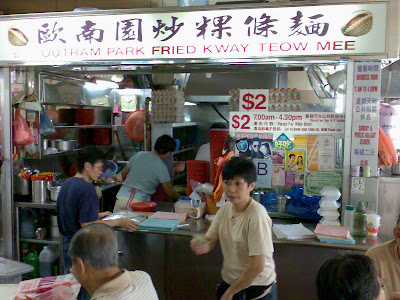 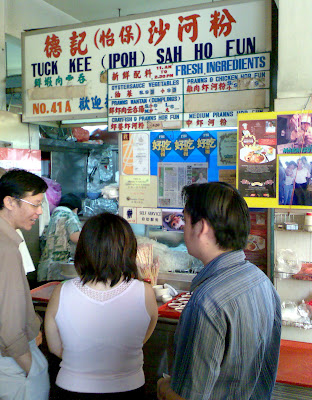 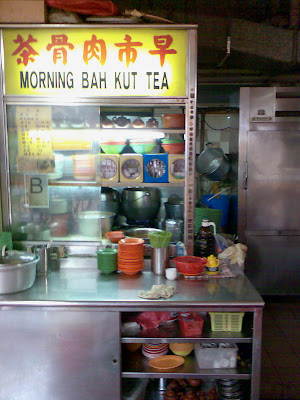 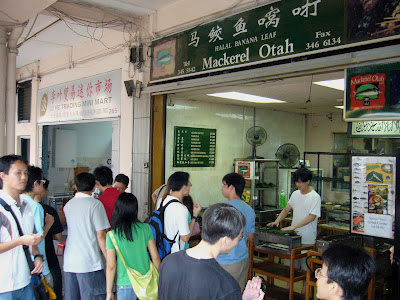 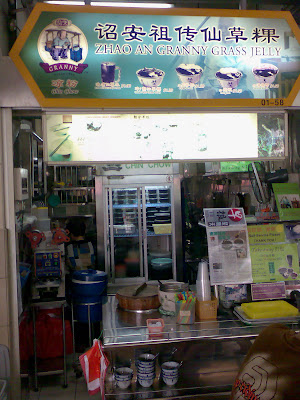 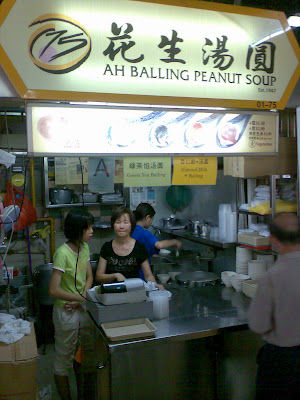 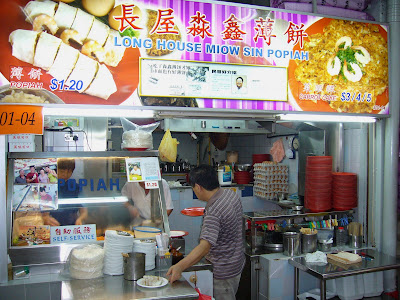 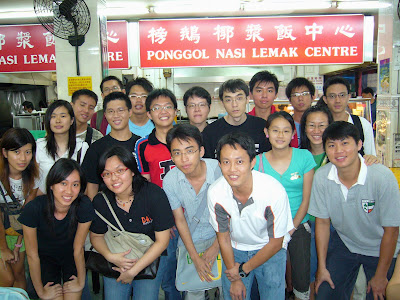 Chew On This: NTU's Deli Apprecio Club has more events coming up. If you are a member of NTU and would like to join us for future trips or if you want to collaborate with us, please contact me via thehungrycow@yahoo.com.sg
Posted by The Hungry Cow at 1:10 am

Hi! 1945 is when the Japanese left Singapore!

Hello green eggs. Ohh...so it's the end of the Jap Occupation i see. Thanks for the info.

The granny who started the Chin Chao business just passed on. Lets all remember her for her grass jelly(:

CYY: Oh dear. Sorry to hear about her passing on. She left behind a yummy legacy.