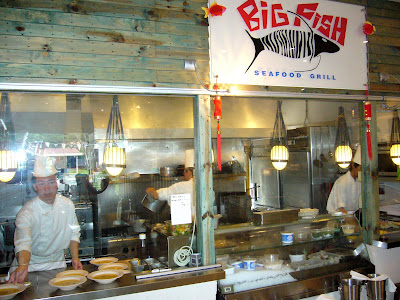 Big Fish is a two-year plus old restaurant that sits along one of my favourite makan haunts, Upper East Coast Road. And it was also where the Deli Aprecio Club visited last Saturday.

Together with a group of about 23 people, I went down for lunch. Susan had pre-arranged with Big Fish and a four course set lunch was subsequently rolled out. 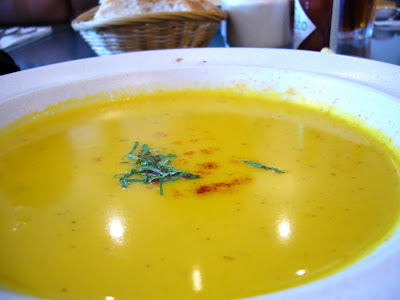 The meal started with a delicious Pumpkin Soup which was accompanied with warm, thick slices of bread. The Pumpkin Soup was sweet and creamy with a hint of spice that prevented it from being overly cloying. 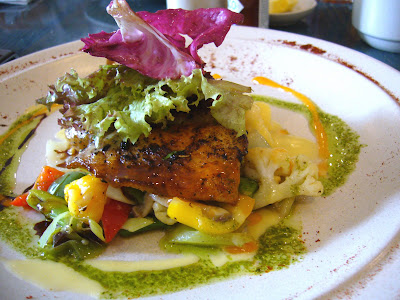 For the main course, we were served Pan-Fried Sole with Assorted Vegetables. The sole tasted fresh and its flesh was soft and yielded easily to my fork. The assorted veggies consisting of leek, bell peppers, onions and cauliflower, were a little too oily for my liking. I would have preferred them roasted and drizzled with a little olive oil to add a smokey dimension. The only carb on the plate was the mashed potato which was smooth except for the small chunks of potato (purposely done?), giving it an interesting texture. The presentation of the dish was pretty with the colourful veggies adding er..colour and red wine reduction, orange sauce and basil oil drizzled around the plate. Unfortunately, the trio of sauces did not really work for me. While they did not taste bad individually, I would have preferred just one type of sauce. With fresh seafood, there's no need for complicated sauces and flavourings ya?

Paprika, a mild red pepper, seemed to be the choice of garnish here at Big Fish. I first noticed paprika dusted over the Pumpkin Soup and now sprinkled on the edges of the plate. 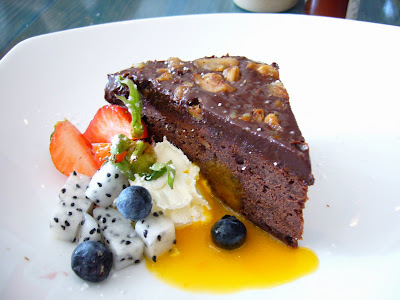 To round up the meal was home-made (or rather restaurant-made) Brownie with Mixed Chopped Fruits and Mango Sauce. The Brownie was a tad dry but I so like the chocolate ganache layer at the top of it. Thick, creamy and rich, it was not overly sweet and had a slight bitter aftertaste. It also probably had a quickie with an alcohol. But by then, it could have just been my inner wanting surfacing. 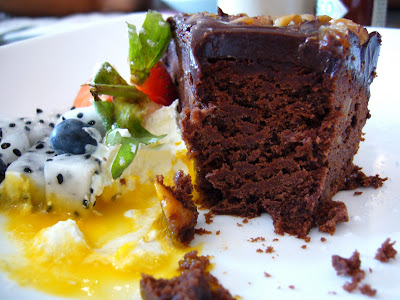 Now to the man behind the food. Is that you asking for the fourth course, I hear? It's either a soft drink, coffee or tea. Ok back to the brains and hands behind the food. 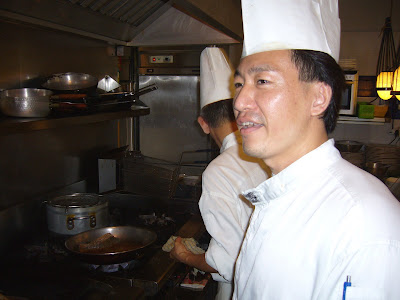 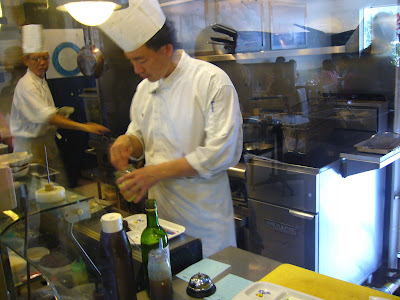 Previously from hotels such as Goodwood Park and the Mandarin, Chef Terrence has helmed the kitchen here since its opening. He brought to the table a lemon sole and explained about the fish and some ways of cooking it. Other fishes that are available here include halibut, mahi mahi, snapper, rainbow trout and of course the omnipresent salmon and tuna. Most of these are air-flown from New Zealand and Australia.

Is a lemon sole black... 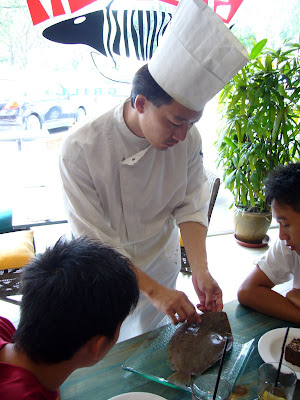 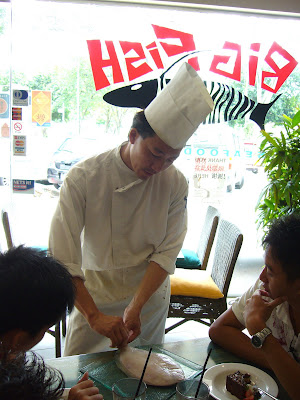 Both! It's a type of flounder so one side is black while the other is white.

I can't help but liken Big Fish to Greenwood Fish Market. Both serve delicious seafood and have a good selection to choose from. But unlike the latter, Big Fish does not have a market whereby fresh seafood, gourmet sauces and flavoured oils are available for sale. The lady boss, Ms Loi, pointed out that the market for these items there are small and the relatively near-by Blue Lobster does already serve this market. But if you wish to purchase a piece of fish or two or a dozen of mussels for that matter, you can try asking Ms Loi. *winks*

By the way, Big Fish does sell marinated seafood for barbeques so the next time you want a barbeque but are too lazy to go grocery shopping and go through all the hassle of preparing the food, think Big Fish. 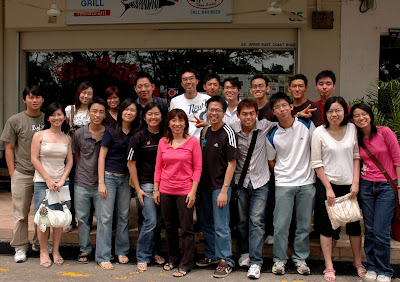 Chew On This: If you like oysters, come down to Big Fish on Wednesdays and with an order of a main course, fresh raw oysters are available at $1 each.

PS: Group pic provided by Pony. Thanks.
Posted by The Hungry Cow at 5:11 pm