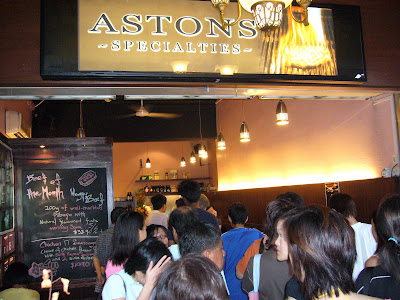 Perhaps part of being Singaporean means queuing up for something (even if it's for Hello Kitty) and feeling happy after a good bargain. It was the latter that propelled me to Aston's Specialties again. Good food at even better prices. I wasn't looking forward to the queue though.

This was my third visit to Aston's and my second time blogging about it. On my virgin visit, I queued for about 20 minutes. It became just over 30 minutes on my second. And on my most recent visit, I waited for almost an hour! I still can't believe I had waited for an hour. It must have been the food demon in me suppressing all rational and practical thinking.

We thought most people who had to wait long in the queue would order more food and take their time to eat to make the time spent in the queue 'more worthwhile'. Another very Singaporean trait. But as soon as we got our seats, we realised that while people may order more food, they most certainly won't linger over each dish. Despite the visual presence of a few units of air-conditioning on one side of the wall, the place was stuffy and hot. Aston, please do not ever start selling steamboat in here. 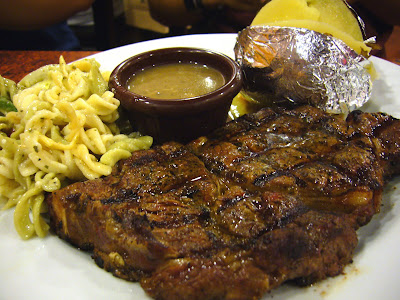 Previously happy with the Prime Ribeye Extra Cut ($14.90 for 250g), I stuck to the same choice and selected a baked potato and pasta salad for the accompanying sides. The steak was done to medium-rare perfection and was as good as I had remembered it to be. Tender, juicy and full of beefy oomph. Kudos to the pasta salad too. I had raved about this here before and still am raving about it. Spirals tossed with oil, some herbs and a hint of citrus really refreshed the taste buds. 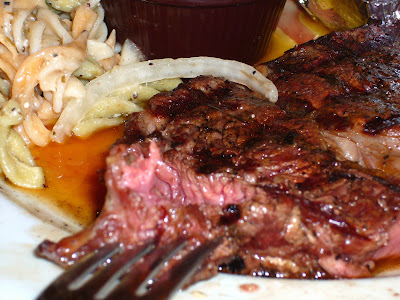 But from previous experience, though the ribeye was delicious, 250g of bovine protein could not really fill my stomach. Much less appease hunger. So I had to stock up on carbos which was why I selected the above two said side dishes. 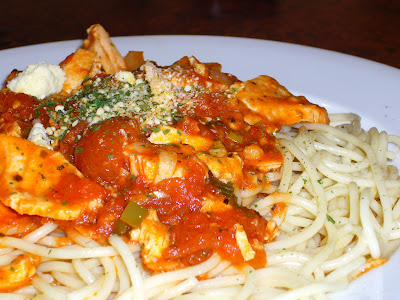 In addition, I also ordered a Spicy Grilled Chicken Spaghetti. But the servers made a mistake and brought me a Salmon Spaghetti ($7.90) instead. Hungry me wasn't going to wait for chicken. Thick flakes of salmon were placed over the spaghetti and bathed in a tomato sauce. While the spaghetti was too limp and over-done (like in a previous visit), the sauce of tangy tomatoes and the salmon flesh were sufficiently tasty. For a tomato-based pasta, I was surprised that there was quite a lot of oil in it. But pasta isn't really Aston's strength. 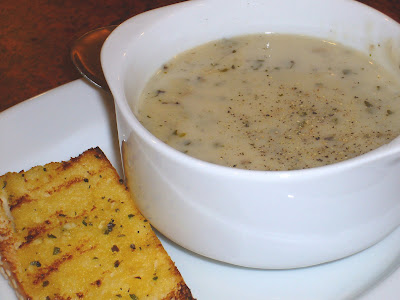 And my next point is about the soup-of-the-day or more aptly called the soup-of-everyday. It comes with every spaghetti ordered and is also available ala carte ($2.20). No surprise that it was Cream of Mushroom. On all three visits, somehow it has always been Cream of Mushroom. With that said, I have to comment that it has improved since my first visit last November. It now has a bit more taste to it but don't expect much for a $2.20 soup. 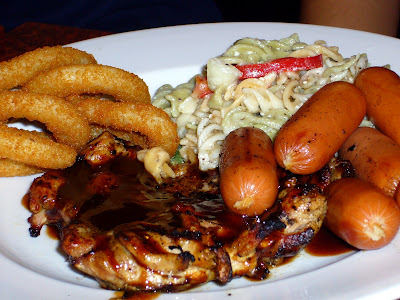 Daniel ordered the Grilled Chicken and Sausage Combo ($10.90). The chicken can be done in any of the available styles. Daniel had his with a smokey hickory barbeque sauce. I found the sauce a bit heavy and would try other styles the next time. The chicken thigh was tender and while the sausages looked like those from a can, they had a crunchy bite.

If you think of going at a later time to avoid the lunch/dinner crowd, think again. I arrived at about 6.15pm, got a seat after an hour and when I passed by again later at about 10.30pm, the queue seemed to be equally long. And no, they do not take reservations unfortunately.

Aston's strength lies in the affordable prices (except for 30 cents for iced water), very valued-for-money food, and fantastic beef. With beef of this standard at this price, this hungrycow has been won over.

Chew On This: While in the queue, I was looking at this menu board. Is it just me or with the maroon backing and dark wood borders, does it look like what the now-defunct Ponderosa used to have? 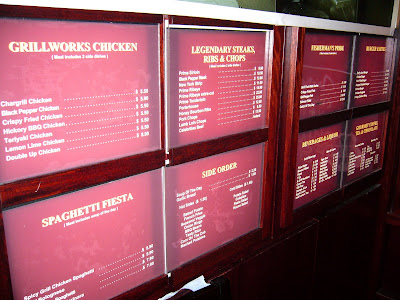