Pizza & Pasta by the Waterfront 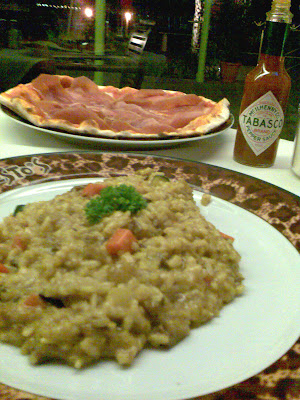 It was my first time at VivoCity, Singapore's latest and biggest shopping centre. I've heard quite a bit about the dining places there and thought it would be good to see them for myself. I headed to VivoCity with Karen for dinner and thought of surprising Shiming who was there with her friends. But in the end, the surprise backfired when we realised that she had already left for home. So much for a surprise...

I found Vivo's layout confusing. There are only a few floors but the shops are arranged in small loops such that I ended up walking in circles without covering much ground. There are many makan places there and some even have the extra benefit of having a waterfront spot. One such place is Modestos and I was glad I had dinner there.

It was quite obvious that the tables that had a waterfront view were mostly occupied. Who in his right mind would want to sit facing the huge, cold mall? we managed to secure one such table which had a nice view of the tourist boat ferrying people around against the backdrop of the lighted Sentosa bridge and the colourful cable cars that looked like lighted boxes moving up and down an invisble line. Karen seemed rather easy when ordering food. Not wanting to make a choice, she left it up to me. So after finding out a bit of her preferrence, we settled for the Risotto Primavera E Zafferano ($21) and the Pizza Proscuitto Crudo ($21 for a regular). 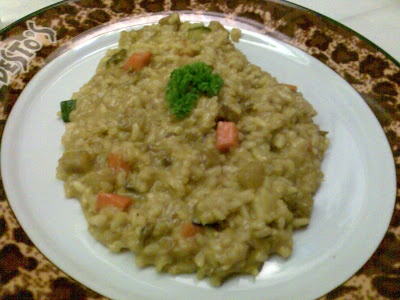 The Risotto Primavera E Zafferano does not look pretty. Yes, it even looked kinda like puke to a extent. BUT it tasted oh-so-good. Each grain of rice was plump and had absorbed all the goodness of the saffron, butter, cheese and dried porcini mushrooms. It was certainly a good combination of ingredients that provided a heady flavour without being cloyingly rich. The only thing I didn't appreciate were the small cubes of carrots in there. I must say I'm biased against the orange root but chomping on those carrot cubes just brought out a taste I much dislike. 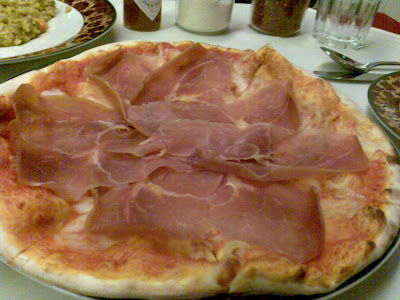 I was happy that the Pizza Proscuitto Crudo was able to get rid of that horrid taste. Modestos has a reputation of churning out great pizzas and this one is one of them. The thin crust was smeared with tomato puree and topped with cheese and parma ham. Simple and elegant. The slightly charred base also added a nice smokey touch to complement the salty parma ham. I took a whiff and detected a faint but distinct olive oil fragrance which indicated that they could have drizzled some over the pizza. Mmm...I could have shouted "Ma Ma Mia!"

And I have to add that service was really good except for the lady (not in uniform) who stood at the entrance and brought us to our table. But I choose not to let one person spoil the night of otherwise great service.

Chew On This: UOB card-holders get a 1-for-1 promotion on pizzas and pastas. I certainly enjoyed this promotion and hope that you will too.
Posted by The Hungry Cow at 11:34 pm