The 1st of December marks the end of exams and the beginning of the much awaited holidays. It also called for the League to gather once more for more causal banter and even more nonsensical theories that seem to spring out of nowhere as we do a bit of catching-up. Potential Nobel laureates and in some cases terrorists...hmm.

After KTV at Smith Street, we strolled around Chinatown before meeting up with Ewan. We had actually wanted to check out the Viennese coffee place on Neil Road but had apparently walked the opposite direction...Which led us to settle at Qun Zhong Eating House. Ewan had previously eaten here and said the food was pretty good. And in we went.

The place was small and packed. Thank God we had arrived after the dinner crowd otherwise I could just imagine the queue outside. For a place that does not bother to decorate or have some sort of interior design and still being so packed, I thought the food must be good. Ewan placed the orders and we ended up having a mini noodle degustation for seven people. A far cry from the time he had ordered two $18 claypot rice from the famed Chinatown stall which left the stall uncle and the people around us slightly stunned if not amused. 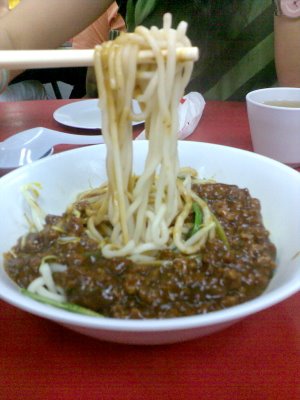 The menu was small and offered a few noodle and dumpling dishes. The Zha Jiang Mian ($4) was a bowl of noodles drenched in a pork-based sauce. While the noodles were okay, the sauce didn't really impress me much. It lacked fragrance and depth. 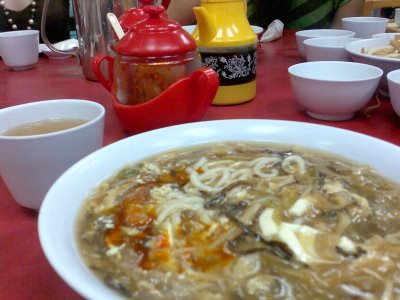 The Suan La Mian ($5) or Noodles in Sour & Spicy Soup was also disappointing. To be fair, I never was a fan of Sour & Spicy Soup. And this version didn't win me over. The thick gooey soup was not spicy. Only a trickle of chili oil gave a spicy illusion. Perhaps Jessica Alba can do a better job. ;) 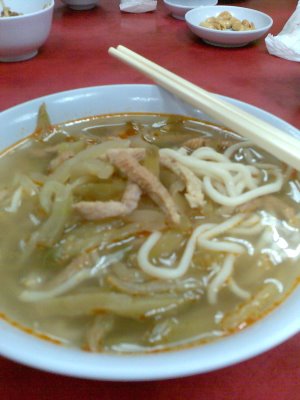 The last noodle dish was Noodles in Preserved Vegetables & Pork Broth ($4). This fared better than the Suan La Mian. The soup was tasty with influences from the preserved vegetables and the strips of pork. 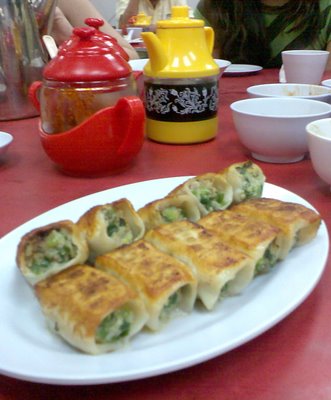 When noodles failed that night, I looked towards the dumplings. The Guo Tie ($7) or what the Americans call 'Potstickers', turned out to be the knight in shinning armour. Instead of the common ones where by the filling is fully enveloped in the skin, these were semi wrapped, displaying the meat filling. The way they executed this here was exactly the way I like Guo Tie to be. Pan-fried so that the base of the dumplings would have a crisp, golden brown tan and with the addition of some stock into the pan and covering it, the steam created would penetrate through the Guo Tie, cooking its insides. The filling of pork and Ku Cai was savoury and the Ku Cai did not have that overpowering smell that I dislike. Yummy. Very Yummy. 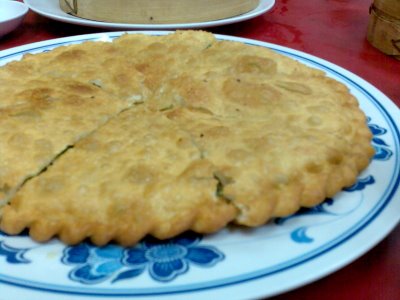 A quite similar tasting and rather weirdly-named Chinese Pizza ($9) was probably their take on Chong You Bing (a fried crispy onion 'pancake'). I would have preferred something less soggy and more crispy. The one I had in Taiwan was the equivalent of our Jalan Kayu Roti Prata. Think crispy and well-fried with fragrant onions embedded within the dough. 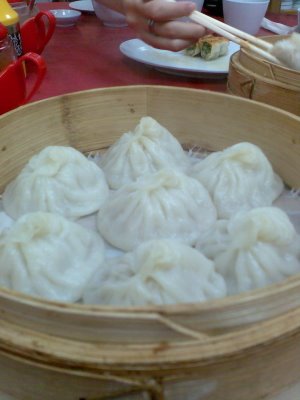 Xiao Long Bao ($7) = Little Dragon Dumpling?? Well, literally translated that is. I found the skin of the Xiao Long Bao too soft, without the slightly chewy texture which probably explained why they broke easily. Or according to 'experienced hand' Ewan, we simply didn't use the correct technique. The meat filling was all too soft, almost melting away in my mouth. But I would have preferred a bit of resistance and bite. Personally, not good compared to many others around. 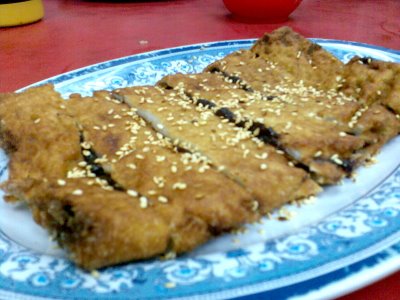 For dessert, we shared a Dou Sha Jian Bing ($9). The middle layer of sweet red bean paste was sandwiched between two outer layers that were nicely browned on the outside while retaining a chewy glutinous inner surface. At this price, one could probably buy two bowls of their noodles but I doubt one would be able to get the same satisfaction that this dessert brought.

Chew On This: This place has its own Japanese and Korean clientele! My guess is the Sake bar next door could be a reason.

PS: The photos were taken using my camera phone (which I will blog about soon) as my digital camera is with my Sis who is in Israel right now.
Posted by The Hungry Cow at 2:26 am