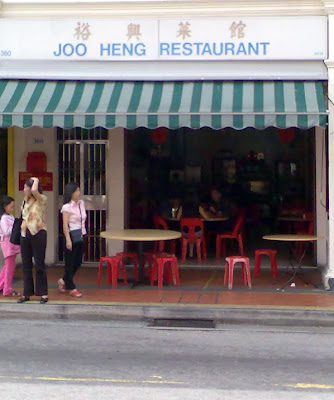 Joo Chiat is really fascinating. After all, the area is as famous for it's food and peranakan culture as it is notorious for it's massage parlours and dingy budget hotels. Now the area is trying to dump off it's sleazy association. Is it a coincidence that red-light districts happen to also boast some of the best food spots? After all, where there are people, there surely must be food to sustain them right?

One thing I've noticed about the Katong-Joo chiat area is that small Cze Char restaurants are almost always packed especially during dinner. Most of these places look like they have been around for 20 odd years and exude an old-world charm. Joo Heng is one of these places and I popped in for lunch on a weekday.
There were a few tables with office workers tucking into their food. Other than that, the place wasn't really crowded. Good because there was no need to queue or wait for a table or for the food to take ages to arrive. Dinner may be a different scenario though. 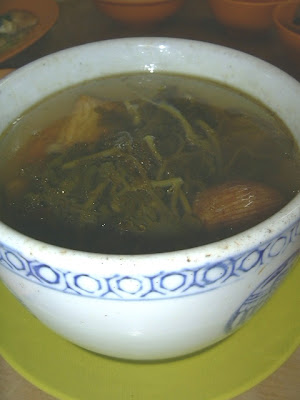 The Watercress Soup tasted really different to me. Neither better or worse. Just different. I was expecting the unmistakable flavours of pork, red dates and watercress to hit me but there was none. After deforestation of the watercress I then realised that what remained at the bottom of the bowl was fried pieces of snakehead fish, and not pork ribs. 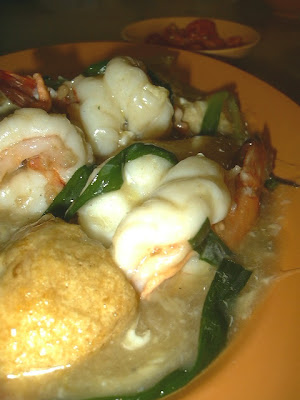 The auntie recommended Prawns with Beancurd which she said is one of their signature dishes. And I loved it! There were only three prawns for our table of three, so that works out to one prawn per person unless the other person really loves you or is allergic to prawns. But the prawns were big and had a very crunchy/springy bite. I'm not surprised if they soaked the prawns in lai sui much like many restaurants around. The beancurd was not those round eggy ones. Instead they were more like sliced chunks of beancurd with an egg coating. Delicious. 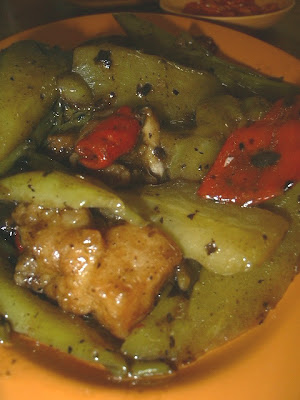 Stir-fried Bittergourd with Pork Ribs is a commonly found dish but no less popular. While I liked the fact that the bittergourd slices did not have that extremely bitter taste associated with not blanching them in salted boiling water before cooking, I found the pieces of pork ribs too small. Otherwise, the dish would have been better with generous-sized pork ribs drenched in the black bean sauce. 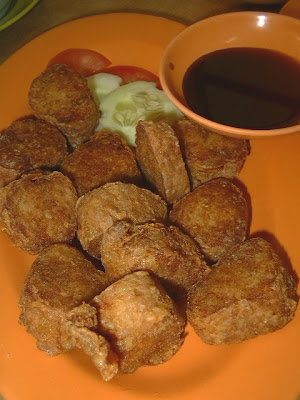 Joo Heng's Hae Zho (think ngoh hiang) was filled with tasty minced prawns, chestnuts and pork. Each piece was fried till crispy and the skin was not too salty. Great when dipped into the sweet sauce that accompanied it or with a dollop of balachan. I would have preferred the filling to be more roughly chopped than finely minced for a better texture. 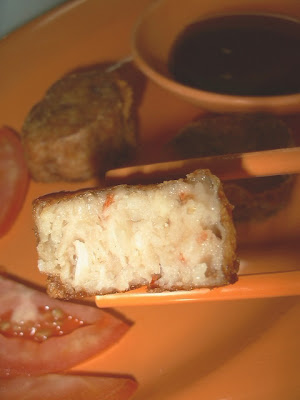 Talk about balachan, Joo Heng's balachan is one of the best I've tasted in recent history. It was hot and slightly sour, full of the aroma of the dried shrimps.

Come for a good homely meal and forget about the red-light status surrounding this place...Unless that is what you are seeking for in the first place.

Chew On This: When asked if the food they serve are Cantonese or Teochew, the auntie said cham-cham (mixed).
Posted by The Hungry Cow at 1:08 am

My brother introduced me to your site. So, let's say if I only have 2 days to spend in Singapore. Can you recommend me the food places (hawker centers or coffee shops) that I must not miss? 2 breakfasts, 2 lunches and 2 dinners. I know that Sg is small but try to keep to the North.

Looking forward to your blog on that. You still have 2 months. ;)

Thanks in advance and happy holidays.

Thanks for dropping by! Hmm..are you a tourist or a local returning home from abroad?

I have to say that I'm not exactly well-versed in the North but I still hope you'll have some idea on where to eat at from my posts that so far are mainly based in the Central and East, and anywhere that I happen to trot to.

Happy holidays to you too!