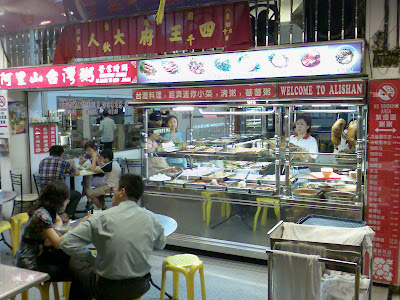 Christmas is just around the corner and the crazy heavy downpour isn't what most would hope for. Snow, I'm sure, would be a different thing. But why not make the best out of the rain. Certain foods are best eaten on a cold, rainy day. Steamboat and porridge comes to mind. 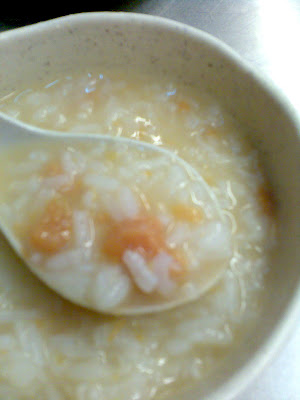 Feeling that I should eat something healthy after all the sinful makaning the past few days, I decided on Alishan Taiwanese Porridge. It's like Teochew Muay where you order the dishes you see on display and eat them with porridge. Although plain porridge was available, I opted for the sweet potato porridge. I would also urge you to do the same. The long grains were soft without being super mushy and there was a nice fragrance of rice. The small bits of sweet potato also added a slight sweetness to the otherwise plain porridge. 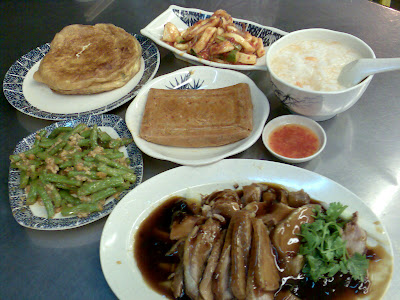 As for the dishes, I tried the braised duck ($7), otah ($5), chai poh omelette ($6), sotong with chili sauce ($4)and stir-fried long beans ($3). These were for three persons. The braised duck tasted pleasantly gamy but one too many pieces and your jaws will have a good workout. The otah did not come wrapped in a leaf but rather was a huge slab of otah on a plate. I found it too rich in coconut for my liking. And I wish there were chunks of fish in it.

The chai poh (preserved radish bits) omelette was well executed. The omelette was thick and fluffy, with crispy edges. The chai poh was salty but it went well with the porridge. I have to admit that it was oily but it's only through a very hot wok and overly sufficient oil that the omelette can achieve this standard.

The sotong (squid) with chili sauce was a little cold and squid being bland by itself, needed the Thai chili sauce to prep it up. If you are into Thai-styled chili sauce which tastes of a mix of spicy, sour and infused with lemongrass, then this should be fine for you. The stir-fried long beans with minced pork was a tad oily but otherwise was also a good dish to complement the porridge.

So gather the family or a few friends and brave this cold rain for some sweet potato porridge. If you need to eat more (because it's porridge and porridge seems less filling than rice), just go ahead and order a few bowls. He who feels pai seh (embarrassed) goes home hungry. Certainly not me. I finished my seven. 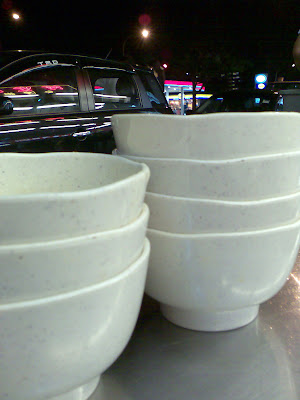 Chew On This: The sweet potato porridge, priced at just 50 cents per person, is free flow and this place opens past midnight, haven't you always been looking for a place which serves simple, good food that is also light on the stomach and wallet?
Posted by The Hungry Cow at 2:08 am