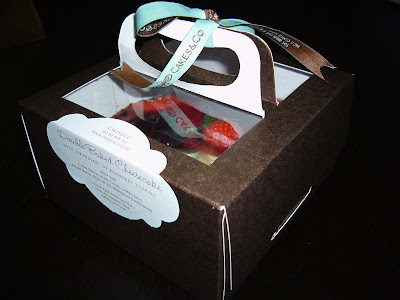 Cheesecakes are getting common but a really good cheesecake is hard to come by. My good friends would remember that slightly a year ago, I had a huge, HUGE cheesecake craving. At the end of just three weeks, I had devoured a total of 26 different slices of cheesecakes. It was pretty comprehensive as I stuck my fork into cheesecakes from places like Starbucks, Olio Dome, Coffee Beans & Tea Leaf, Hilton Hotel, Secret Recipe, River Gauche, Cafe Gelare, McCafe, NYDC, The Cheesecake Cafe among others. But few could bring me to seventh heaven. 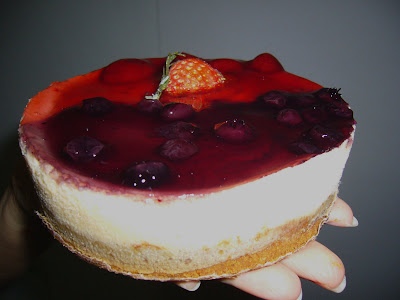 Back from Indonesia, my mum brought back a cheesecake that simply blew me away. It was from her friend, Lea, the Indonesian home-based baker. With ingredients such as French butter, Madagascar Vanilla Beans and Fleur de Sel, it was a power-packed cheesecake. 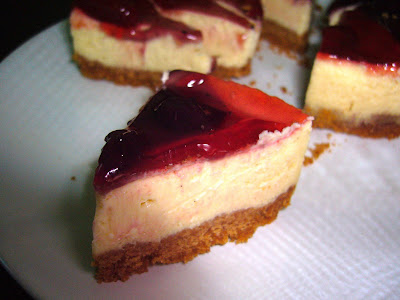 The cheesecake was made such that there was a strawberry halve and a blueberry halve, with fresh strawberries and blueberries dotted on each respective halve. (Quite a good idea for those who cannot decide on which flavour to order.) The cheesecake was favourably dense and wonderfully flavoured with the cream cheese and vanilla. It had weight in the mouth yet slid so smoothly down the throat. I love it for being sweet, tart and a wee bit salty at the same time. The vanilla was unlike those artificial essence which when compared to the real pod, seems harsher in taste. It was fragrant and sweet-smelling. Lemon juice which was another ingredient, provided a touch of citrus and helped to cut the richness of the cream cheese. The cookie base was neither brittle and dry or wet and soggy. It was a good balance of crumbly and being just slightly moist.

I had thought of eating just a slice but after the first bite, I gobbled almost half the cake. A cake this good should not be eaten in moderation. Moo!

Lea also bakes Tiramisu, cupcakes and camomile cookies! I bet they all taste good. People who have tried should let me know. Now, I wonder if she does overseas delivery to Singapore...

Chew On This: For those who want to know a bit more about pricey gourmet ingredients, Teo Pau Lin and Violet Oon did a comparison between them n their earthly counterparts. Check it out here.
Posted by The Hungry Cow at 5:32 pm

oh me goodness!!!
that's the legendary cheesecake that I had a bite on!!!