No Signboard, No Problem.

They say a name is as important for a person just as a signage is important for a shop. I couldn't agree more but the folks at No Signboard simply took it the other way. Their legend has it that a grandmother worked the wok as a street hawker years ago without a signboard. Her food was so popular that the lack of a signage literally became her identity, her trademark.

Since then the place is just known as No Signboard. Popular for it's seafood, I brought my crab-loving granny there. I haven't seen her and grandpa in a long while and thought a Sunday lunch after church with them would be nice.

We ordered White Pepper Crabs, Boiled Live Prawns, Luo Han Zai and Ginger & Onion Frog. While I'm not a super-dooper big-time fan of seafood or like shellfish, I do enjoy certain types and dishes especially steamed pomfret, squid and lobsters. Selective seafood fan I am. On the few occasions that I've been to No Signboard, it was all because my dining companions liked seafood. I still say "Bring me the steak!" 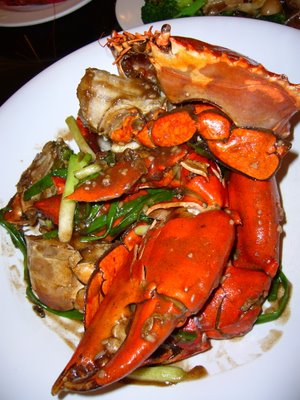 The White Pepper Crab ($43 for one crab) was big and meaty. I like the fragrance from the ground pepper, giving the dish a peppery lift. I envy people who can really manoeuvre their way through the shells of this crustacean to extract every gram of meat. I can't, or maybe it's just the lazy eater in me. Fiddling and breaking and peeling and extracting crabs and prawns just seemed too much work for a sliver of flesh. Oh and I suspect that black pepper was involved too. Ah well, another example of what you see on the menu is not exactly what you get. Not too bad nonetheless. 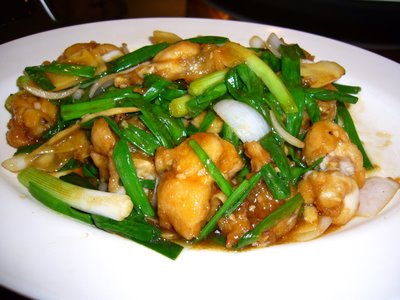 Considered exotic to Ang Mohs who are known to film the killing of these bullfrogs in Chinatown much to the dismay of the frog-sellers, frog is common to the Chinese here. No Signboard's Ginger & Onion Frogs are notable with the spring onions and ginger slices perfuming the pieces of frogs. Like almost everything 'exotic', it does taste relatively like chicken. 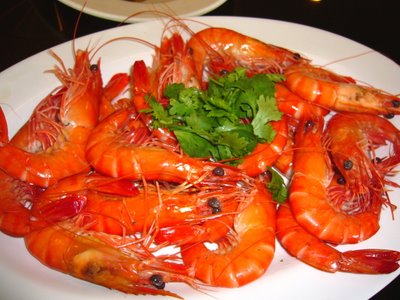 The Boiled Live Prawns ($30 for 600g) were good. It's one of the few prawn dishes that I like. The sweetness of the fresh prawns are brought out without sophisticated sauces and strong flames. Perhaps my Cantonese roots have a part in me liking food that is not too heavy on seasoning but instead stresses on the freshness of the ingredients. 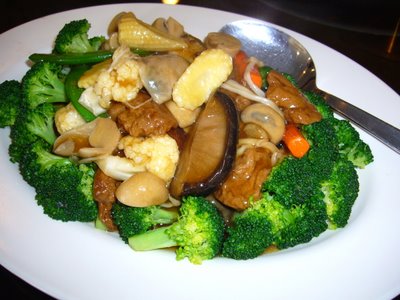 The Luo Han Zai ($12 for medium) was a medley of mushrooms and fried gluten. It was stir-fried in a tasty brown sauce that I enjoyed with my bowl of rice. A good respite from the seafood.

I have to admit that I was rather happy with lunch that day. The thing I that don't know is if it's because of the food or seeing my grandparents. Or just both.

Chew On This: Unlike most Chinese restaurants, No Signboard @ Esplanade doesn't close in the afternoon so if you are by the river and the Merlion is not your idea of seafood, you know where you can turn to.
Posted by The Hungry Cow at 6:42 pm

Peishan: Yeah, cherish them while I can.

Nayr: You are back! You've got a branch at your door step. How's that for convenience? :)