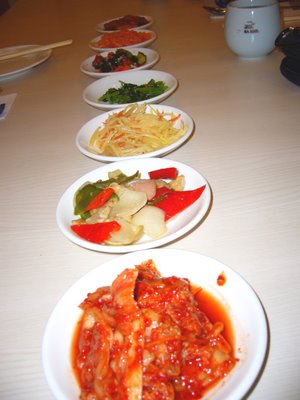 I never really got into the whole Korean drama thing except for Da Chang Jin. But thousands out there feed on Korean dramas released each season and fuelled by the Korean invasion, anything stamped 'Korean' seems to be in demand. Even pseudo-Korean Seoul Garden unashamedly benefited. Move aside Hong Kong serials, Bollywood movies, Japanese shows and Hollywood stuff, Korean dramas currently reign supreme. Just ask my next-door neighbour whose world will come to a standstill at a particular time every day.

It's quite funny that I didn't fancy Korean food until I had lunch at a Korean restaurant in the US, of all places. Brought there by a Taiwanese friend towards the end of my attachment program at Cornell, I fell in love with kimchi, stir-fried sweetish beef and Korean rice cake. It was a humble place with a homely feeling, nothing fancy. But the food I had there still resides fondly in my memory, erasing the nasty experience I had with kimchi and egg rolls onboard Asiana Airlines years ago.

And so I, together with a party of five, decided on trying Se Ra Bel Korean Restaurant in the Furama hotel after hearing it was pretty good. One thing I realised about Korean dining places is that they tend to be less dress-ed up (the place, not waitress mind you) and more relaxed compared to their Japanese counterparts. It was unpretentious comfort.

An array of no less than seven small dishes greeted us as soon as we got seated. These contained mainly bits of vegetables and soy bean products. The nicely-fermented kimchi provided a tangy, sourish note which whet my appetite. It was made in-house with 24 ingredients. Also worth mentioning was the julienned potato and carrots. Crisp and tasty, I could not resist attacking them with my chopsticks. 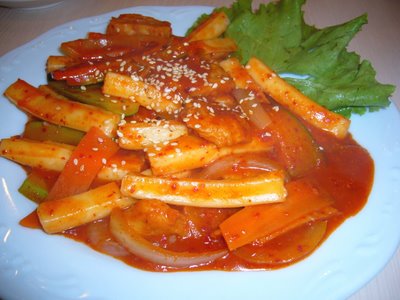 The Dok Boki Bokum or Korean rice cake ($15) was of a starchy kueh-like consistency. Sliced into slices and stir-fried with cuts of cucumber, carrots and onion in a slightly sweet-spicy sauce. Not as good as I had remembered of the one in the US but still palatable. 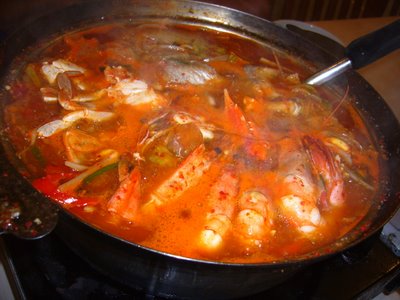 The Hae Mul-Jeon Gol ($40 for large) was a steamboat pot of a spicy broth with a chockfull of seafood and vegetables. Look closely and you may see a few pairs of eyes staring back from beneath the broth. Digging into big pot revealed pieces of flower crab, large prawns, clams, squid and fish. The mini ocean also had cabbage and golden mushrooms (enoki to the Japanese) which lent their natural sweetness to the tasty broth. If certainly looks hotter than it really is though still mildly spicy. I ordered a plate of marinated beef ($18) as an addition to the steamboat. 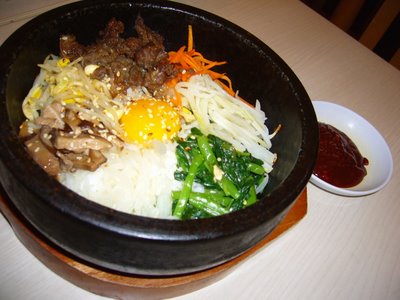 The most outstanding dish I had that afternoon had to be the Dolsot Bibim Bab ($15). Think of it as claypot rice with an unmistakable Korean twist. Served in a very hot stone bowl, the rice is topped with slivers of beef, carrots, onions, mushrooms, green vegetables and big bean sprouts. A fresh egg cracked right in the centre and sesame seeds sprinkled over the ingredients added an aesthetic touch. The idea is then to add the accompanying sauce, mix all the ingredients up with the rice and watch as the raw egg coats each morsel. The result was a tasty pot of rice with the flavours of the beef and the various vegetables melding in harmony, only to be further accentuated by fragrant sesame seeds and the egg itself. Because the stone bowl was so hot, bits of rice and stuff got stuck to the bowl, which imparted a lovely charred aroma to the dish. This dish alone was enough to satisfy my tastebuds.

The name Se Ra Bel means 'heavenly cuisine' and I do hope that heaven would have a branch. And oh, do check out their Ginseng Chicken which seems promising but unfortunately ran out when I visited.

Chew On This: Se Ra Bel will be closed from 13-30th November as they will be moving to #03-01 in the same building. Use your American Express or HSBC card to get a 20% discount.
Posted by The Hungry Cow at 7:55 pm