Who says you can't eat ice cream on a rainy day? For ice cream of this consistency, I'll eat it in any weather. Never mind the monsoon. 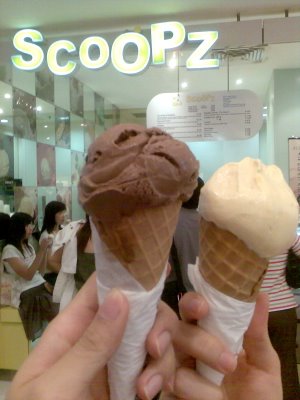 Like many local ice cream start-ups such as Ice Cream Gallery, Icekimo, Island Creamery and The Daily Scoop, Scoopz began small and uses real fruits and quality ingredients in their ice cream. But unlike most of the rest, Scoopz offers flavours that are not as unique as chiku, wild as teh halia or intoxicating as lychee martini. More 'normal' flavours such as banana, chocolate cookies, durian, peach, green tea and watermelon reside here at Scoopz. Honestly, their chocolate and durian are among the best I have tasted.

This picture features their chocolate and jackfruit ice cream. (Each scoop at $2.80.) The chocolate was rich, chocolatey and not overly sweet while the jackfruit had a delicate jackfruit flavour that was so addictive I wished I had ordered double scoops. Bits of yellow pulp were testament to the real fruit being used, no yucky artificial flavourings. Another thing about this wave of local-made ice cream is that most contain less fat and sugar than the average ice cream, and that is without losing its creaminess or taste. At Scoopz, ice cream is hand-made daily on the spot using freezing pans and it is quite a sight to watch as they churn out dense, smooth ice cream.

Compared to most other 'established' and 'branded' ice cream companies around, I personally have a preference for their local counterparts with their cheaper scoops, healthier contents and flavours that are uniquely Singapore!

Chew On This: The Jurong Point branch has a flavour of the month ($2.30) and an introductory special ($2.30) which promotes new flavours. October's flavour of the month was chocolate while November's Mocha. The current introductory special is lemon which I found too sour for my liking. After feedback, the guy behind the counter said they are making subsequent batches less sour.
Posted by The Hungry Cow at 1:35 pm

Me wants to try zee durian scoopz!!
Haha! and please dont be as crazy as me to have dark chocolate and lemon flavas together..! Unless you wanna get highhhhhh. Hee. Mooooooooooo.