First there was the metrosexual. Then the ubersexual. It's no surprise that even burgers are being sized-up these days. Überburger, touted as a gourmet burger place and opened by the people behind Corduroy & Finch, has drawn mixed reviews. Probably the most outstanding fact is that the most expensive burger here cost $101. Yes, one hundred and one dollars for a burger with decadent fillings such as wagyu beef, truffle sauce, foie gras and champagne dressing.

When most of us Singaporeans are used to $5, ok maybe now $7+ burger meals at fast food places, forking out $101 for one unit of burger seems like an indication that one has struck lottery and also probably Alzheimer’s. Luckily for us common sane folks, there are other much 'down-to-earth'-costing burgers here. The cheapest is a chicken burger at $9 and many other can be had for below $30.

The first time I visited Überburger a few months after they had opened, I was not particularly drawn to come back. Today was the second chance I gave it, to prove it's über-ness. And by the way, über in German means superior, over the top.

Dinner at Überburger was on a Saturday night. The place looked the same as I had remembered from my first visit. Large glass windows allowed outsiders to the view of the bold red and black themed walls and floors within. Four or five plasma TVs screening soccer matches and MTV concerts hung from above. A distinct air of superiority was definitely in the air. Snooty, some may say. The waiters were smartly dressed in black and the menu was in a long, rectangular form. It certainly took a while to get used to how the price of each item was displayed. For example, thirty2$ actually means $32. I found it confusing at first but was amused later at the rather interesting concept. 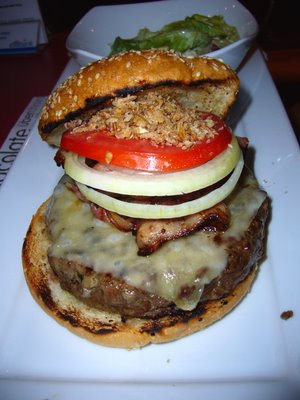 First up, the Ubmonster ($29). The insides consisted of a 250g of chopped sirloin topped with emmenthaler cheese, hickory smoked bacon, tomato and onions. The Ubmonster came with a bucket of fries and a salad. Ordered for the beef to be done medium, I still found the meat dry. It was a big burger but I didn’t find the taste big. The fries were really nice though. Thickly-cut and salted, it was crisp outside and soft fluffy within. 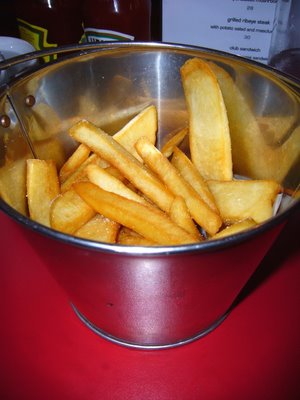 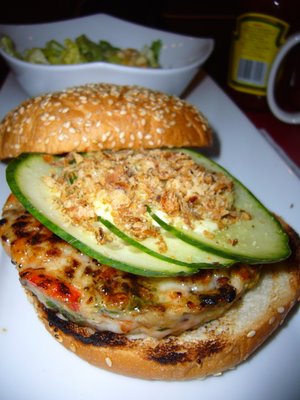 I ordered the Blue Tiger Prawns burger ($22) out of curosity. I haven’t had a prawn burger and was interested in how it would turn out. The menu stated that chopped prawns were mixed with ginger, chili, chives, sea salt and pepper. Well, I didn’t detect much ginger or chili or sea salt or pepper. The prawn patty tasted fresh albeit being bland. I had to ask for mustard to prep up the burger. I couldn’t help but compare the prawn patty to fishcake and even some dim sum filling. 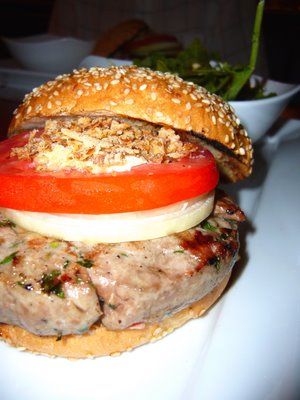 Next was the Wagyu-stlyed Buger ($32). Supposedly 'wagyu fats mixed with normal sirloin to create a juicy patty that would resemble a wagyu patty', I wasn’t impressed with it. I ordered this one done medium-rare and found the beef too chewy, partly also because of bits of tough chewy tendon and fat fibers. How ironic. What I did like was the rocket salad that accompanied this burger. The rocket salad was dressed in a light vinaigrette and I was happy to find pine seeds sprinkled on top of the leaves. 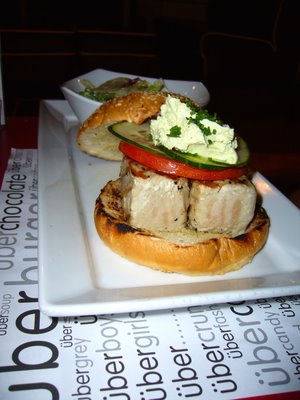 The Tuna Steak Burger ($25), touted as a larger version of a Corduroy & Finch bestseller, also sounded interesting. Two-inch yellowfin tuna steaks done rare, smothered in wasabi cream and sandwiched with tomato and cucumber slices between sesame buns. I had made a mistake by informing the waiter to hold this burger in the kitchen as there was only three of us and I didn’t want the burger to get cold. This resulted in the tuna steaks being overly done. So instead of the slightly cooked outsides and the reddish raw inside, the tuna was cooked through and tasted dry. A pity as I thought the wasabi cream would have paired with it very well. The wasabi cream was luxuriously smooth and had a nice, non-overpowering, kick to it.

On the whole, I felt that the dinner that night was a hit-and-miss affair. Simple things like a warm juicy meat patty and toasted buns are important but Überburger seemed to have fumbled with the basics amidst the aim for burger nobility. In fact, I think I enjoyed the sides like fries and salad more than the burgers.

Despite the many unfavourable reviews and comments on online forums regarding Überburger's service or rather lack thereof, I found service that night acceptable. The waiters were attentive and helped with the explanation of what the menu had to offer. They also asked if we had a UOB card as there was a promotion for cardholders. I like places that inform customers about such deals instead of keeping mum and hoping that customers will not know and so pay the non-promotional price. Water was constantly topped-up and no, they did not charge for it. While not great, service was difinitely better than that stated in forums.

Prices can be generally expensive but yet not without reasoning. They use quality ingredients such as yellowfin tuna steaks, rocket, pine nuts, grain-fed beef plus the fact that everything they use is organic. These do not certainly come cheap. It’s good quality ingredients but I pity the way that they are treated to produce each burger that struggles to achieve über expectations. For a place with German Ralf Spika, with no less than two Michelin stars to his name, as the executive chef, I think for the night I was there he certainly wasn’t. Or maybe Paris Hilton is right. The stars are blind.

Oh Überburger, if only I had left über satisfied.