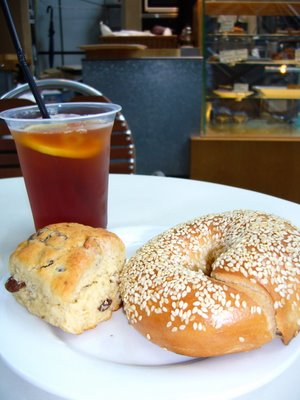 Hot. Sunday. Afternoon. All these three reasons plus the fact that I was feeling peckish after lunch made me find a spot to get some bites and just chill. Forgetting the worries of life and savouring each second that ticked by. Such moments do not come by easily especially when the exams are drawing near.

Once more Cedele beckoned and I ended up getting an iced lemon tea ($2.50), a sesame bagel ($1.80) and a raisin scone ($1.50). I liked the fact that a thick slice of lemon was used to flavour the iced tea instead of one of those scrawny slices that seem to function more as a garnish. I appreciate the fact that the sweetness of the drink could also be adjusted by adding the desired amount of syrup available at the counter.

The sesame bagel was not available at the counter and I had to take one from the baskets of breads that were actually packed for sale. The staff kindly heated it up for me upon request. This bagel was probably the most chewy and tough one I had ever sunk my teeth into. I guess it could have been a result of heating the bagel for too many a second in a microwave (why do they not use a toaster?).

It's such a shame that bagels are not really popular here. The dough is shaped like a donut, boiled in water before being baked. Common varieties include cinnamon raisin, blueberry, wholemeal, sesame and poppy seeds. A good bagel to me is one that is sufficiently toasted for a bit of a crust on the toasted sides and warm and chewy on the inside. Bagels can be eaten plain but would also go very well with some strawberry jam and cream cheese. Mmm...I miss New York. Think my piggie friend in US should try them.

The raisin scone was buttery and slightly crumbly, with raisins giving a sweet touch. It could be better by having a more crusty top and a milky undertone. Nonetheless, this trio took my mind off economics, organic chemistry and the like on a beautiful Sunday afternoon.

Chew On This: I hear Cedele has come up with its own range of Christmas goodies such as Rosemary Turkey, Sherpherd's Pie and Gingerbread cookies. Check it out here.
Posted by The Hungry Cow at 3:27 am

Anonymous said...
This comment has been removed by a blog administrator.
12:48 pm