The ever-increasing reports to do and the impending exams that loom in two weeks, are enough to spook me this Halloween. I think vampires, ghosts and witches would be better off seeking re-employment as cooks, in this time of intense concentration and bitter fight to the end, of exams, that is.

And so happened that I would walk into a quirky restaurant ordering what the menu hails as 'Cooking Pot Hell'. I have always thought of Beppu Menkan as a Chinese-Japanese kind of place serving confusing food based on both cuisines but was surprised when I found out that it is actually Japanese. And that was because of the Japanese offerings on the menu. 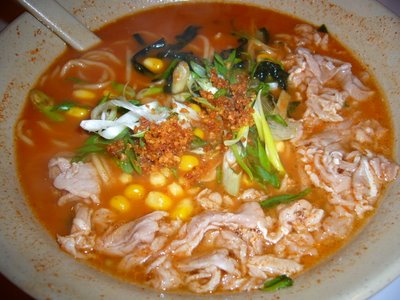 Kamado Jigoku ($9.30) is ramen with sliced beef, corn, seaweed and bamboo shoots in Kyushu soup. This 'Cooking Pot Hell' lets you choose your preferred level of spiciness from mild 1, 2 and fiery 4. Although the menu includes levels 6 and 8, the waitress informed me that 4 is already too hot for most to handle and so would not recommend levels 6 and 8. I decided on level 4 and kept my fingers crossed. I have this thing for spicy soup and noodles that restaurants deem 'hot' and which they denote with a string of chilies printed next to the dish in the menu. Many would also come with descriptions such as 'volcano', 'fire', 'hell'... You get the picture. It's not that I am a chilli-padi-munching, Tabasco-swigging Hellboy but more because I am intrigued by their definition of spicy. Call it culinary curiosity.

Kamado Jigoku was really relatively hot, quite numbing such that the heat sensation hit the back of my throat and the upper palate with the first sip. I use the term 'relatively' as I could still stomach it without jugs of ice water but could not avoid breaking into a sweat. I would say that this level of spiciness is acceptable for those with a spicy tongue. Those with less tolerance would be prudent to stick to levels 1 or 2. And those devils with fortified tongues that have somewhat lost their heat perceptions should by all means ask for level 8, at their own risk. The thin slices of beef seemed to lack that wonderful beefy flavour, or perhaps I had momentarily lost my tongue. 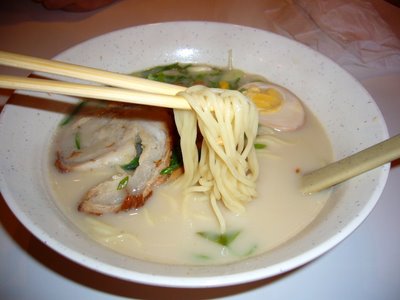 Sane people who like to keep their tongues will be glad that Kyushu ramen ($7.30) is also available. This friendly but boring version is not at all spicy and contains almost the same ingredients except for sliced char siew instead of beef and the addition of half a boiled egg. Be warned that the char siew is not the strip of dyed-red roasted pork that most would expect. Instead it is a rolled-up piece of fatty pork that made no sense to me. No hint of it being roasted nor barbecued, I was not convinced of this version. The soup also had a rather powerful porky taste to it. Too porky in fact. The boiled egg was rubbery and would be more aptly called aged egg. Good thing the noodles were more decent with a springy bite without being soggy.

Maybe I should try their paper steamboat the next time.

Chew on This: Diners are issued with a $2 voucher for their next visit. Not a big amount by itself but quite decent considering the fact that their dishes do not come at high prices.
Posted by The Hungry Cow at 11:41 pm