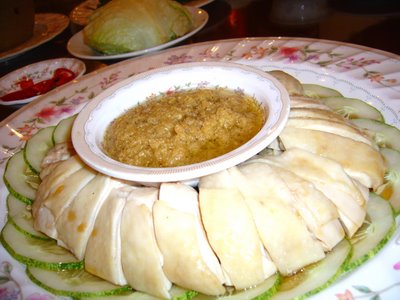 How times have changed. The dishes at Soup Restaurant were inspired by Samsui women. These were women who toiled under the hot sun as coolies, doing manual labour especially in construction, in the early days of Singapore nationhood. Life then was tough and hard. Eating was for survival and was more of a necessity than a pleasure.

I describe the fare served here as 'modern poverty' as the dishes were driven by poor economic conditions and were then considered a splurge or extremely expensive but have now become easily affordable, whether eating out or cooked at home. Most people who grew up in the 1960s and 1970s would tell you that they ate plain porridge cooked with a lot more water than rice grains. White rice was accompanied by fermented beans, salted vegetables and a drizzle of soy sauce. On lucky days, the family would get an egg or two on the table. A whole chicken was only enjoyed once a year during Chinese New Year.

The Samsui Chicken ($25 for a whole bird), pictured at the begining of this post, is similar to what you'll get for chicken rice. The relatively small chicken was chopped into pieces and sat on thin slices of cucumbers. A light soy sauce with sesame oil lightly doused the smooth and succulent chicken pieces. The minced ginger and sesame oil dipping side was fragrant and sharp. And no, there is no chicken rice-style chilli sauce. 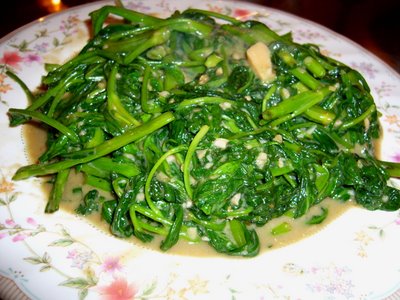 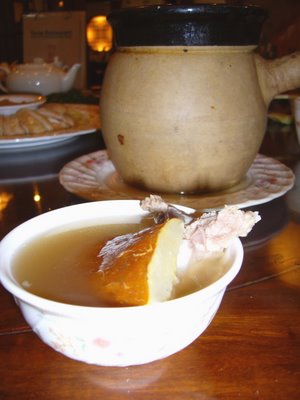 The Boiled Soup of the Day ($9 for 2-4 people) was Old Cucumber (different from aged cucumber!) with Pork Rib soup. This soup, boiled in one of those earthen pots, was light, refreshing and 'cooling'. 'Cooling' soups are believed by the Chinese to relieve heatiness. People who like to scrape the soft flesh of the old cucumber will be delighted with the tender pieces of the gourd. But I was hoping for the Lotus Roots Soup which I've tried before and which I prefer.

Simple, humble and pretty homely is what I'll describe the food. Have some soup for the soul. And don't expect any fancy dishes or modern Chinese fare.

Chew On This: When Soup Restaurant was opened at Chinatown a few years ago, former Samsui women, mostly in their 80s and 90s, were treated to a meal there as an appreciation of their hard work and efforts. They literally build this city with their hands.
Posted by The Hungry Cow at 8:37 pm