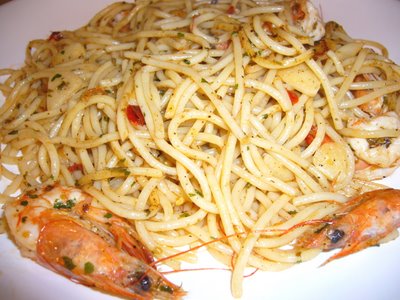 'Great Aglio Olio' I was thinking to myself. My craving for pasta led me to Pizza Pazza at Anchor Point. (Yes, a certain Dr Koh would be pleasantly surprised I'm actually in the West.) Pizza Pazza was owned and operated not by an Italian but a Romanian, Chef Peter Bontoi who used to run Il Piccolo in Crown Centre. Word about his 'restaurant food at food court price' spread like wild fire.

Unfortunately, it is one of those places which I had always wanted to try but some how did not get to do so until now. When I got to Pizza Pazza, I was told that Peter has just some time ago sold the business to a local businessman. The Romanian that I was expecting was nowhere in sight. Instead, a Chinese chef whipped up the dishes for me, after the initial language barrier. I watched him cook a spaghetti dish for the lady before me and immediately requested for the same thing. Apparently not on the menu, she ordered Spaghetti Aglio Olio with Prawns ($6.50), pictured at the top of this post. And so did I.

This was just delicious. The simple combination of olive oil, garlic, chilies, prawns and a dash of herbs and pepper made this a winner. Simple flavours melted to give a spicy pasta stained slightly orange with the fragrant crustacean-infused olive oil. Please be forewarned that it is more spicy than the normal Aglio Olio found elsewhere. Request for a less spicy version if you have a low tolerance for spicy food. The only gripe I had was the irritating prawn feelers which should have been trimmed away. It was quite a challenge to wipe perspiration off my face with one hand and to dig between the strands of spaghetti to remove the feelers with the other hand. 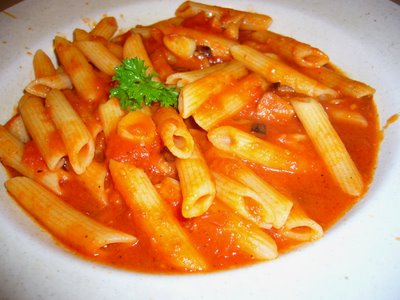 The Penne Arabbiata ($4) was less inspiring. The penne was a little over-cooked and the tomato sauce tasted flat. The chillies failed to give it a lift. Edible but also passable. 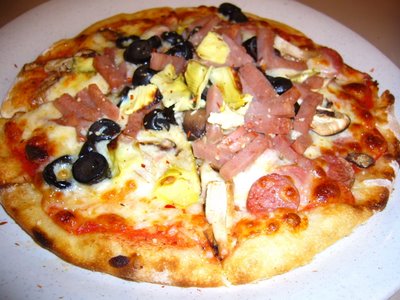 I also tried the 7-inch pizza ($5). The best part of the pizza? You get to choose from a selection of toppings that includes fresh mushrooms, chicken sausage, artichoke, ham, pineapples, capsicum, pepperoni, bacon and black olives at any combination or select all of them at no additional charge. The baked pizza had a nice, thin chewy crust that was topped with sufficient tomato paste and melted mozzarella cheese. The toppings could have been a bit more but I can't ask too much for a 7-inch pizza that costs $5 can't I?

No more ang moh (Caucasian) chef but Pizza Pazza still holds it's own, though it would have benefited from an experienced ang moh's touch. And yes, it does serve Italian food better than most foodcourt stalls and cafes.

Chew On This: Pizza Pazza has a branch in Horizon Food Mall (Causeway Point) and even one in Chongqing, China! Delivery service is also available but not from their Chongqing branch, of course. Call 64743626 to order.
Posted by The Hungry Cow at 7:43 pm