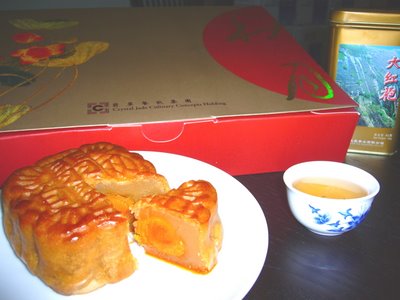 At around this time every year, Chinese in Singapore and elsewhere celebrate the Mid Autumn Festival. And no festival is complete without festive food.

Unlike an unfortunate planet that has recently lost its status, mooncakes seem here to stay. Story has it that these mooncakes were used to hide a secret revolt message and were being distributed to the masses in China long, long ago. Apparently instrumental in the eventually successful revolution, mooncakes have since been passed around during this festival. Many family and friends buy boxes of these sweet treats to give each other as goodwill wishes.

Not like a Western-styled cake or a Malay-styled kueh which contain mainly flour and eggs, the mooncake is traditionally square or round with a sweet lotus paste filling, wrapped by a thin slightly chewy pastry skin. Baked in the oven and served at room temperature, usually with Chinese tea, mooncakes have found their way into many stomachs, and hearts.

Maybe it's the fact that people like innovation and get bored with the norm that many producers have created versions featuring new skins like snow skin and flaky pastry, new fillings like yam, sweet potato, green tea, durians, nuts and seeds, and even ice cream, Bailey's and chocolate truffles! More extravagant ingredients include XO cognac, bird's nest, ginseng and abalone. From mooncakes made with natural sugar to those made with artificial sweetener, sweet to savoury, baked in the oven to chilled in the fridge, traditional to modern creations, everyone is bound to find a personal favourite. Each year, a plethora of choices will spoil even the most fussy consumer.

I have tried some new varieties and have taken a liking to pandan snow skin, green tea and ice cream mooncakes. Call me a purist, but it's the traditional pure lotus paste (both red and white lotus paste variations but I prefer the lighter, more fragrant white) with either one or two embedded salted duck's egg yolks, that still warms my heart. Some producers have stubbornly clung onto these traditional mooncakes, refusing to conform to the wave of new, fancy types that flood the market. I salute them for staying true to the real deal.

Featured in this post is Crystal Jade's White Lotus Paste with Double Yolk Mooncake ($38 for a box of four). I'm pretty impressed with this product of the Chinese restaurant-chain. The only gripe was that the tanned brown skin was a tad too thin for my liking. The salted duck's egg yolks were slightly salty and lent a savoury touch to contrast the sweet lotus paste. The white lotus paste was smooth, fragrant and slightly oily, a pleasant trait that would otherwise result in a disastrously dry and crumbly mooncake filling. The fact that impressed me the most was how incredibly light the mooncake felt in the mouth and stomach. Normally, I would be satisfied with a couple of sliced pieces but this time I polished off one whole mooncake without feeling as if I had swallowed the moon.

I paired the mooncake with Da Hong Pao (HK$168)(literally translates into 'big red cannon'), a Chinese tea sourced from Fujian. The robust slightly tannic tea cuts the sweetness of the mooncake nicely and makes a good complement.

With mooncakes and tea this good, I was, well, over the moon. Maybe it's time that the phase 'the hungry cow jumped over the moon' is coined.

Chew On This: A recent newspaper article stated that each mooncake contains about 1000 calories. That is half the recommended daily intake of around 2000 calories! Fortunately, like most festive food, it's only once a year that mooncakes appear. Moderation, moderation, moderation. Easier said than done but still possible. *Handcuffs and duct tape sold separately.*
Posted by The Hungry Cow at 9:45 pm