Mee, Myself and I 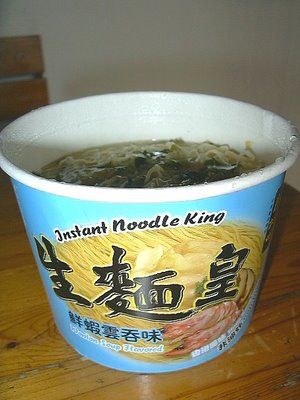 On a lazy sunny afternoon, I am sure most would dread going out to get lunch. Worse still, if there was no one for company, minus Prinze, my three-year old Schnauzer who would gladly share my lunch I'm sure.

Good thing that there was this bowl of noodles in the cupboard. Having one for a quickie lunch brought back memories of my late paternal Grandma. Grandma used to buy a packet of dried egg noodles and cooked them in a prawn and ikan billis ( anchovies) stock for the soup version. If she wanted to serve these noodles dry, she would had just simply doused the cooked noodles in sesame oil, oyster sauce and her hand-pounded chilli paste. Humble Cantonese noodles but oh-so-very delicious.

The egg noodles packed in Instant Noodle King's Wonton Soup Flavoured version is similar. Unlike most instant noodles where by the manufacturer would use egg noodles that were curly and deep fried, this one had dried, non-fried egg noodles that were thinner and straighter. The dehydrated condiments, consisted of cabbage, wakame, corn and chives also added to the flavour of the noodles. It was a novel idea to use dried wakame. I'm sure Grandma would agree.

Chew On This: Since the noodles are not fried, it has significantly less fat than regular deep-fried noodles. So go on, indulge in one. But beware of the ever-present MSG in the soup.
Posted by The Hungry Cow at 9:01 pm