Those of you who used to frequent the now-defunct Fat Frog Cafe near the old National Library must have dearly missed the place and the local bands that played there. Fat Frog Cafe was a pioneer in providing a platform for local acts and music. It started the ball rolling and although it has long ceased operations, its fans would be happy to know that a new establishment has sprouted up in its place.

Timbre, a bistro-bar, has rooted in hidden soil along Armenian Street. Due to ongoing construction around it and loud music volumes, you will probably hear it before you see it. So follow your ears.

I checked out Timbre on a Thursday night and sat on black wooden chairs at the back, to the left of the stage. A couple of skinny trees which, because of their long draping aerial roots, gave a rather ancient feel provided a magical touch to the atmosphere. Stars glittered in the dark Thursday sky while a gentle evening breeze caressed my face. All at once, I was brought into the middle of the woods. Perfectly romantic. A much appreciated break from the hustle and bustle of life. Or I could have just been too hungry or tired and began hallucinating. 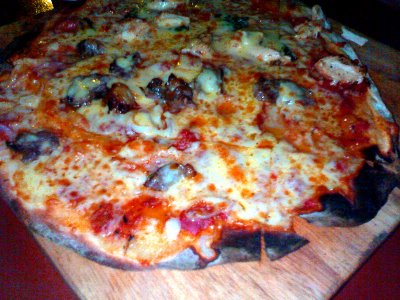 I was zapped back to reality when my nose picked up the scent of the food that had arrived. Instead of bringing me to the next heaven, I was rather disappointed with the food. Only the thin-crust pizza ($16) had made the grade. Not that it was fantastic either. The flour-dusted edges were overly burnt. The toppings of chicken and basil, beef and red onion were decent but stingy. The size though was good for sharing among three to four adults. 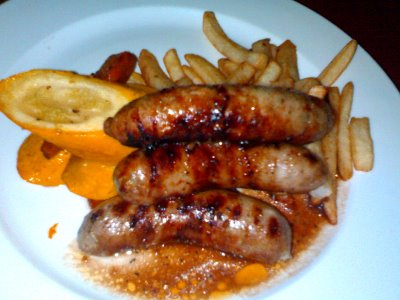 The kitchen had run out of mashed potatoes and so I had Bangers and Fries ($15.90) instead. The sight of the measley portion of the fries that accompanied all the dishes nearly knocked me off my seat. How 'generous' could any food establishment get with fries? The coarsely-chopped pork sausages lacked the nice bite that the skin should provide. As crude-sounding as it is, I'm talking about something that I feel every good sausage should have. That is, a good firm bite as one sinks his teeth through the skin. 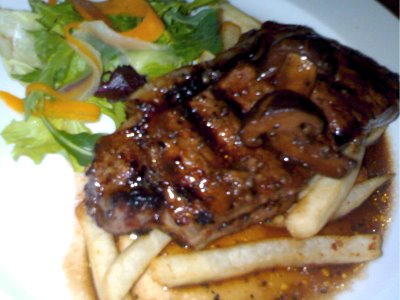 The Sirloin Steak ($18.90)comes in a valued-for-money size but is a tad tough even when I requested it to be done medium-rare. 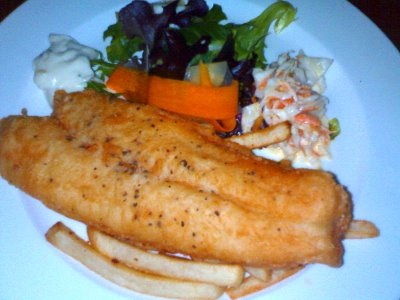 The Fish and Chips ($12.50) were sub-standard. Soggy fish and even 'soggier' fries. The Pork Rib ($16.50) which looked like a mess actually was tender enough to melt in my mouth. Exactly as the menu had claimed. Taste wise, it could have been better. 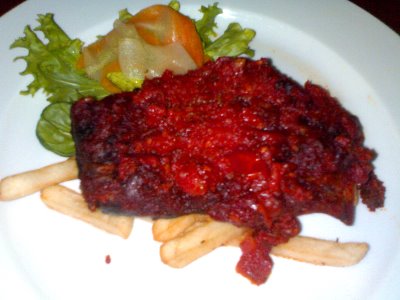 Unimpressed with the food, I looked to Alemay and Fatt who were performing that night. Alemay doesn't look like she can sing but boy has she got a pretty good voice, proving that looks can be deceiving. How I had wished that the food would have tasted better than they looked. Alemay and Fatt were belting out a mixture of pop, jazz and soul. Perfect music to laze around and lounge. I would have preferred EIC, with their alternative rock tunes, though. Maybe I'll pop by again when they play on their ususal Wednesday slot.

So while I applaud the rustic, romantic ambiance and the music dished out by local bands, I feel that the food needs great improvement. Solid wood but not so solid food.

Chew On This: Timbre has daily happy hours promotion from 6-9pm and if you should arrive after 9pm, fret not. There are post happy hours offers too that varies depending on the day of visit. Just ask the staff.
Posted by The Hungry Cow at 5:10 pm