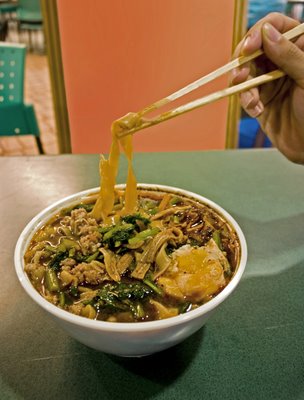 I like being surprised by a dish or two when dining at a place whose existence seems to only be to fill one's stomach, not bothering about one's taste buds. And look what I discovered in Nanyang Technological University's canteen A. This bowl of ban mian hei tang really brightened my lecture-filled day.

As oddly intriguing as it sounds, the dish actually tastes better than it sounds or looks. Sadly, like most lazy hand-made noodles stalls on the rest of the island, this stall uses a machine to roll out and cut its noodles. I still feel that cold steel lacks the warmth of the human hand. But alas, most in Singapore, having been blinded by commercialism, actually fail to understand this.

Actually the blackish broth is meant for a pork and flour vermicelli dish but because I felt that flat egg noodles would keep me more satiated, I informed the uncle at the stall to make the switch. A change that would definitely taste better than the original clear broth. Add a spoonful of chilli and it gives the dish an additional dimension. The chilli prepared by the Chinese lady, is similar to those used in authentic Chinese recipes and mala steamboat. Chilli and Szechuan peppercorns among other spices are fried and grounded, infusing the surrounding oil. This makes the ban mian hei tang fragrant, spicy and rich. Don't over do the chilli unless you are a dragon or risk your taste buds getting numbed by magic.

Chew On This: The numbing sensation you get from the above-mentioned chilli is due to the Szechuan peppercorns. Also known as hua jiao, this small but intensely fragrant and hot spice is a favourite in Szechuan cooking.

PS: Thanks Ryan for the camera and picture above.
Posted by The Hungry Cow at 12:39 am

The black soup and chilli are the stars.