With Germany out of the World Cup finals, grieving fans could find comfort in some hearty German fare at Werner's Oven. Beginning in 1988, the Werners couple set up shop at Parkway before shifting to Simpang Bedok and then again to its current location at Upper East Coast Road. 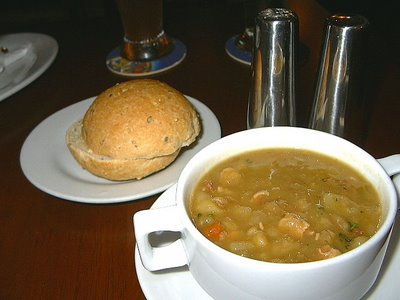 The cosy family restaurant has a very jovial Bavarian feel. Patrons happily tucked into their food and chattered away over desserts and beer. I had the Green Pea Soup ($6.50) and found it thick and flavourful. Small bits of potatoes, carrots, peas and pork contributed to the texture and taste of the delicious, concentrated liquid. 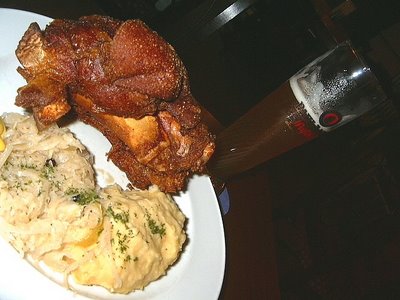 I would highly recommend the Roasted Pork Knuckle ($18.50). It came with mashed potato and sauerkraut on the side. Sauerkraut, for those who may not be German fans or at least fans of German cuisine, is a pickled cabbage dish which commonly accompanies sausages. The humongous pork knuckle has an extremely crispy skin with soft succulent flesh underneath. Kudos to the chef who scored in this dish. 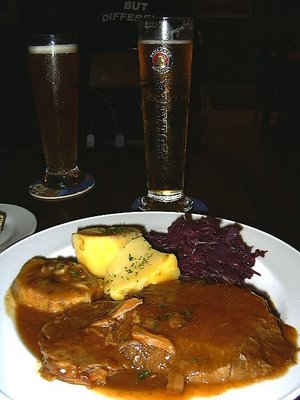 The Schmorbraten or beef pot roast ($19.50) also demanded praise for its tender stewed beef smothered with brown sauce. Accompanying the beef was a heap of shredded red cabbage, boiled potatoes and a German dumpling. The red cabbage went well with the beef. But I felt that the dumpling was a tad too starchy. On its own, the dumpling was rather bland but like a solid defender, the rich brown sauce with mushrooms saved it from definite defeat.

With German food this good, I'm sure German fans will nurse their wounds and get on with the beautiful life.

Chew On This: Werner's Oven also has a German bakery churning out cakes, breads, muffins and gingerbread cookies among others. Check it out while waiting for your food to arrive!
Posted by The Hungry Cow at 1:23 am