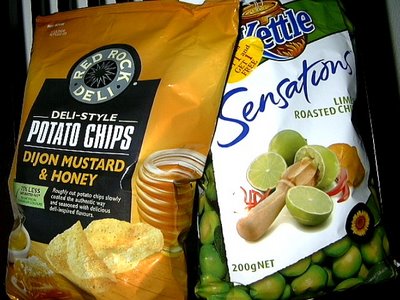 Potato chips are one of those snacks one finds hard to resist. This is especially if it comes in a big, brightly-coloured packet with unusual flavours such as the two I sampled above.

The Red Rock Deli's Dijon Mustard & Honey flavour remains one of my favourites. It has a tangy, savoury and slightly sweet taste which was what one will expect from mixing mustard with honey. Heavenly on its own, it will also be the perfect companion to sandwiches.

Kettle's Lime & Roasted Chilli was a let-down, proof that looks can indeed be deceiving. The packaging was the only attractive attribute. But alas, I can't eat the packaging can I? The chips tasted like ordinary barbeque-flavoured ones without the spicy and sourish hints from the chilli and lime that I was so expecting. Might as well get a pack of Tai Sun barbeque-flavoured potato chips. Not that Tai Sun is no good but I was expecting more from Kettle, supposedly one of Australia's best chips.

Chew On This: Candy Empire has special promotions from time to time. Check the store to see what awaits. The above two bags had a 'buy one get one free' promotion.
Posted by The Hungry Cow at 10:40 pm