Like Changi Village, Charlie's Corner has been around for a pretty long time. Famous for it's Fish & Chips, I decided to check the place out after recently hearing comments from a friend.

Situated in a corner of the Changi Village food centre (think nasi lemak stalls), Charlie's Corner reminds me of an old-school tuckshop. Old faded pictures of planes and patrons adourn the wall on one side of the bar counter while an eclectic mix of vintage clocks, posters and paraphernalia decorate the rest of the stall. I could not help but soak in the air of nostaglia as my dad pointed to an area just outside the stall and told me of how people used to come and watch planes fly by. The area, though relatively remained unchanged, now have a couple of trees obscuring the once-unblocked impressive view of the passing-by planes.

The atmosphere there is relaxed and very laid-back, ideal for fuss-free gatherings where one does not need to dress-up to have an al fresco dinner and a couple of beers. Talk about beers, Charlie's offers an impressive stock of beers from countries such as Belgium, Netherlands, Germany, India, Thailand and Japan. Some brands are uncommon and this is great for those who want to try something different, rather than the usual Corona, Hoegaarden or Heineken again. I tried Kwak, a deep bronze-coloured Belgium beer that the girl behind the bar counter recommended. It is rather strong tasting and consists of about 8% alcohol. 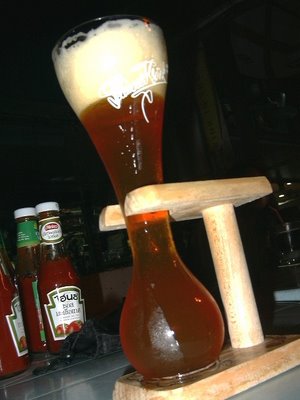 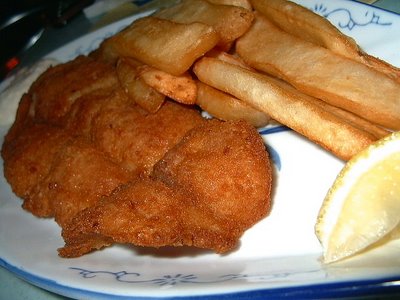 The Fish & Chips (~$14) were good. The breaded fish tasted fresh but a bit bland. The thick-cut fries went well with the cold beer. I also ordered the ribeye steak(~$17) which was a disappointment. It was too thin for my liking and lacked the 'beefy' taste which I simply adore beef for. 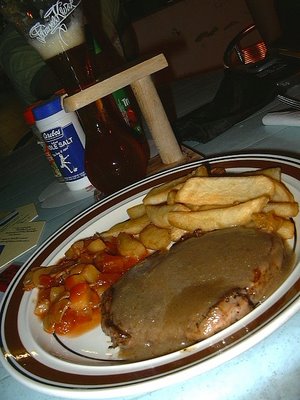 Still a very decent place to chill and enjoy a night's out especially if one is sick of town. But I would'nt be ordering the ribeye again.

Charlie's Corner
Changi Village Food Centre
(Ask around if unsure of it's location, most people they will know.)
Chew on This: Try approaching the people behind the bar counter for drink recommendations and they may give you a surprise or two which are off the menu.
Posted by The Hungry Cow at 12:22 am