Lately, there has been a number of reviews on this new place in Parkway Parade. Hidden in a corner on the first floor and being surrounded by shops such as Marks & Spencer, Novo, Topshop and Esprit, The CaffeBar is a perfect place to chill and rest shopping-weary feet.

I first visited it about two months ago with a friend and tried their crayfish pasta and shakerato. The latter is a shot of espresso shaken with syrup and an ice cube before being served in a martini glass. This drink is ideal for those who dislike the strong bitter taste associated with espresso as the syrup tames the bitterness. The crayfish pasta was good though not fantastic. As for the service, it was then overly-efficient but with little communication between the serving crew. I had to tell four different waitresses at four separate times within 10 minutes that my friend and I had needed more time to look through the menu. I was also informed that they had ran out of Ciabatta bread and was offered normal toasted white sandwich bread instead. To be fair, The CaffeBar has just opened a couple of months back and should be given time to sort out teething issues.

On my latest visit on the 22 April, the service was still as efficient and I no longer had to inform four different people that I had needed more time before making my order. This time round, I ordered an Asparagus Bruschetta, together with a Gourmet Set which comprised of free flow Ciabatta bread (which they had this time), Soup of the Day(Cream of Pumpkin), main course(Spaghetti Bolognese) and a non-alcoholic beverage (Shakerato, thank you). 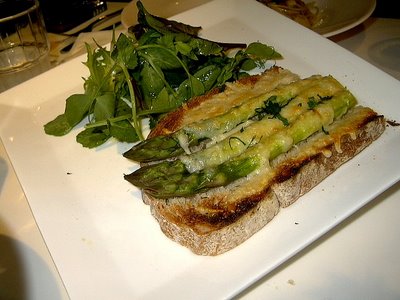 The Asparagus Bruschetta ($4.80) had three thick stalks of asparagus on warm bruschetta and topped with grated Parmesan. A small salad drizzled simply with olive oil and seasoned with salt accompanied the bruschetta. I enjoyed this item and think it would be great for those seeking a light lunch. The thick Cream of Pumpkin was rich and went well with the Ciabatta. As for the Spaghetti Bolognese, it was too dry for my liking. I felt that it could have been done with more sauce and more flavour. The Gourmet Set is priced at $18.80++ and you get to choose your main course from five available choices as well as pick any non-alcoholic beverage. 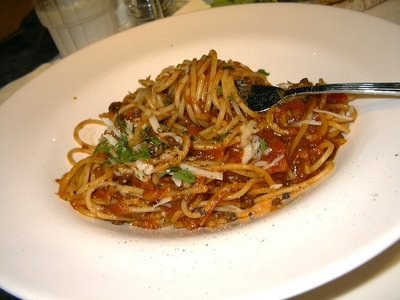 The next time I return, I shall try their Salmon Roulade and Duck Confit which are rather unusual items on a cafe menu. By the looks of things, this secret may very soon be an open one.

The CaffeBar
#01-34E Parkway Parade
Chew on this: The owner of Bakerzin is also behind The CaffeBar.
Posted by The Hungry Cow at 12:17 am